Stamping for the Weekend 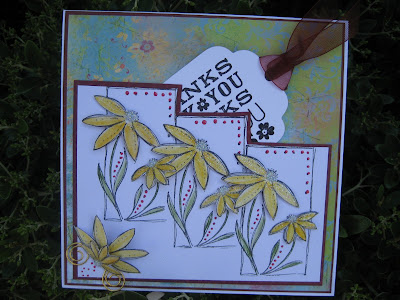 Today's card is a combined effort for this weeks Stamping for the Weekend, where the theme is to create "A wallet card or a pocket card", Spoonful of Sugar and Everybody Art Challenges who both have the theme of "Summer", so I thought these daisies and real midsummer flowers.

I have used Hobby Art FL1910E which I masked and stamped three times to create a stepped effect which is my pocket. Each of the flowers have been stamped again and this is where it all went a bit pear shaped and the fatigue kicked it ........ The flowers were meant to be sparkly, but ended up being embossed and I covered each with a quickie glue pen but dipped them in clear embossing powder instead of glitter by mistake ! At least I found out that quickie glue acts as an embossing ink OK.
I followed the dotty lines of the image with liquid pearls and added more flowers cut from the same image and a wire embelli to the bottom corner. The tag was cut on cricut Plantin and the greeting stamped from Hero LP140. The DP is from Karen Foster ....... also filed under "Green" ........ how long can this organisation work I ask ?
So must away now to have a rest (compulsory apparently) ......... but now I've got a laptop I can use the opportunity to catch up on some more serious blogging ........ I still have so many lovely comments to follow up on and quite a few awards to deal with as well, so will probably be back later.
Posted by brenda at 18:45

It turned out beautifully! And you made some interesting discoveries in the process. I love the card. Nice job making 1 card for 3 challenges.

Beautiful pocket card, Brenda! The backing paper you have used is gorgeous. The flowers are simply amazing and I love your tag.

Thank you for joining us at SFTW and good luck, we hope you'll join us again next week. :)
Vanja

Beautiful card Brenda and the accident was certainly a happy one - it turned out lovely. Very sensible too to combine the challenges - you are being a very good girl am proud of you.

Ah its beautiful Brenda, like the angular shapes of the pocket.
Pinky

What a lovely pocket card you have created Brenda, the design of it is fab, the tag looks great and those papers are lovely, such pretty stamped images and the flower in the corner really sets your card off a treat. Thank you for taking part with this weeks challenge over at SFTW, good luck and hopefully you;ll be able to play along again. xx vicki xx

love the pocket idea very nice,I wonder if you are getting back on form Brenda, hope so love chrisxx

Hi Brenda, just wanted to let you know that Ive left you an award on my blogspot. with love and hugs Shirleyxxxx

Fantastic masking Brenda, I do love the stepped effect and also how you have followed through with liquid pearls and your wired corner flower is the perfect finishing touch for your gorgeous tag pocket card.
Thank you for joining us again at "Stampin´for the Weekend", good luck and we hope you'll join us again next week too.
Hugs,
Nicola -x-

It all worked really well, Brenda, even if it wasn't what you intended. I know you're still a bit under the weather but I definitely think this heat adles your brain, well that's my excuse and I'm sticking to it.

This is a beauty Brenda I love those floral images and the pocket card design it is just perfect.

Wow there is a lot of work in this card and it shows. If it helps I think the clear embossing powder has worked well and given a nice sheen to the images :) I love the way you have used the image 3 times and and then a cut down part of it as an extra embelishment in the corner. Oooh and loving the pearly dots.
Thank you for joining us at stampin' for the weekend and good luck.

I love these little flowers. So much time and effort! Gorgeous appearance and I really like the way you have designed the pocket. Great tag and beautiful ribbon!

Thank you for joining us this week at "Stampin' for the Weekend". We hope you had fun making your project card and that we see you for many more challenges in the future!

I really love your ideas. this layout if fantastic and alive. well done you Melx

Great card! I love the pocket and how you made it look like steps. My favorite is the flowers and wire!

What a beautiful card...
Thanks for joining us at a spoon full of sugar and EAC

Wonderful card.
Thanks for joining in our challenge.
Doreen
EAC-Team

Thanks for joining in our challenge.

A beautiful pocket card Brenda, I love the way you have tiered the images and the tag is lovely. Thanks for taking part in this weeks SFTW
Clairex

Your pocket card is gorgeous, Brenda:O) Love the stepped effect, the flowers looks amazing. Lots of work done here:O) Thank you for joining us at SFTW this week. Good luck!
Nancy;O)

This is really gorgeous, i love the image and the sparkles, and the lemon colours are so cheery, perfect...

Thanks for joining us at SFTW, Good luck hugs Pops x

A lovely card Brenda, love the step effect you've done with the flowers, and the layering of them as well. Yes quickie glue works great with embossing powder as well......nice effect for doing writing with it, then using embossing powder over that and heating it up, but they have a lovely sparkle to them. Love the flower in the corner with the wire too, very nice and your tag is great.
Thank you for participating in the "Stampin' for the Weekend" challenge again this week.. Good luck and we hope you'll continue to join in on the challenges on a weekly basis. Have a great day.
Donna xx

What a beautiful card! Have a great summer!

This is gorgeous stamping! I love the pocket shape you have created.
Thanks for joining the SFTW challenge this week.
Hugs
Jen x

Oh this is gorgeous, love he daisy flowers!! :) And having the tag behind them like that looks great! :) Thanks for joining us at Stampin' for the Weekend for this challenge and hope to see you again for the next challenge tomorrow :)

What a great card! Love the flowers and the fab colours.
Thanks for joining in our challenge at EAC.
Hugs
Moni