Daisy and Lily have arrived !!
A few days earlier than planned, but the breeder asked if we we could take them now so of course we said yes. They are adorable of course, but it seems appearances can be very deceptive and Daisy who was always so docile and sleepy when we visited is the original Duracell advert, she has not stopped all day long.
We have had lots of puppies over the years and they are usually timid and take days to settle in, but not Daisy, she has even charged up and down stairs a few time.........steps usually take them ages to attempt, so baby gates everywhere.
So a few pictures to share. No crafting whatsoever and can't see too much happening for a day or so either. 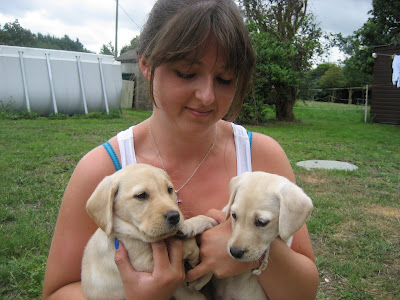 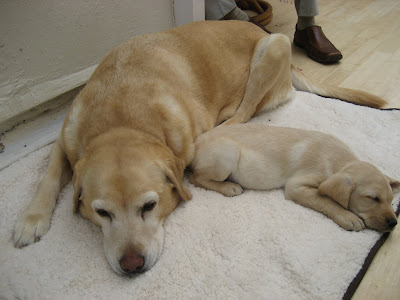 This sleep lasted all of ten minutes, but Buffy is being very tolerant and allowed Daisy onto one of her blankets in the conservatory. When George arrived last February it was weeks before she would let him anywhere near her beds (she's spoilt, she has two one of which is in my craft room) 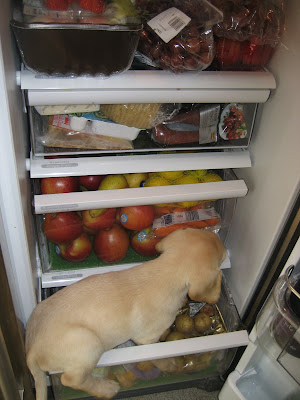 The early arrival meant a rush order out to Tesco as cupboards are still bare from our hols, so a great chance for Daisy to discover she loves the Monster in the utility room (American fridge freezer). She climbed in several times when I was getting more bags in to put away. 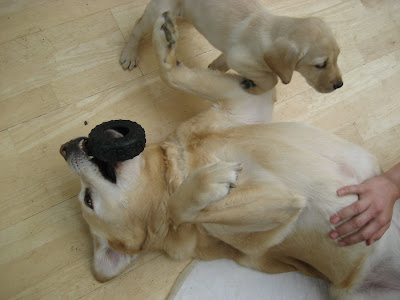 Alex brought both puppies a new toy, but Buffy sees to think it's fair play to borrow one. At nine she is still a puppy at heart, we call her the Peter Pan of the doggy world. 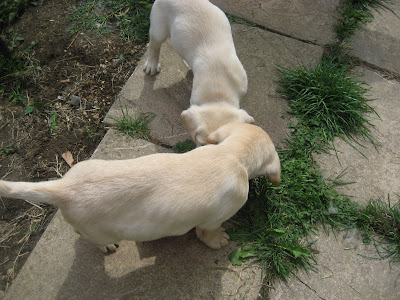 As you can see, Daisy is quite a lot bigger than Lily at the moment.

Hope you enjoy, will share more in a few days.
Posted by brenda at 16:29

They are all so sweet!
I bet that it is newer boring in your house!lol.
Hugs!
Sandra!

Ooooooh, I'm here drooling over these gorgeous babies. Don't envy you the housebreaking but oh, that puppy smell!!!!!! hugs to you and scratches behind the ears to the pooches. eileen

I can see crafting taking a bit of a back seat - you won't dare take your eyes off them.

Love them, so awesome, how many pets does that make in the household!? be careful they might realise they outnumber you! lol

They are gorgeous time wasters!!! Have fun!!

Hi Brenda, they look gorgeous, ENJOY.
and may I say what a healthy looking fridge you have, or are you just having a healthy week after a not so healthy fortnight!!!

oooh these are so adorable!! But you have 2 puppy's now?!?!
pfeeh... Good luck with that! I thought one was difficult enough =D

Good luck with them!

Oh Brenda! They are both gorgeous! I did laugh at the one in the fridge - looks like a fan of healthy eating!

Thanks for sharing the fabulous photos with us Brenda. Such adorable puppies, have fun with them!
xx

aww Brenda they are soooo sooo cute . Darent show my daughter or she will pester me!! I had the same thought about the fridge as Chris ..
Lisa ;)

Aww, they are gorgeous and settling in so well!
Clare x

Who would want to craft when you've got these 2 little beauties for entertainment - they're absolutely gorgeous Brenda and I am sooooo jealous! Love the photo of Daisy raiding the fridge!

Hi Brenda, They are so cute! I think there is going to be fun times ahead in your house lol!

PS: Thanks for letting me know when you are demoing at SS. Don't know if we will be able to come because we are going to a craft show in Thetford on the Sunday.

Congrats on the cuties! They are absolutely adorable! I love the fridge picture!

Ohhhh ohhhh they are adorable Brenda you are soo lycky...and busy busy. I so look forward hearing all about the pranks they are up to!!!!
Enjoy the happy time
Lots of hugs for you all
Lina

OMG so adorable! You can't have much room left in that house now lol.
Pinky

Awww awww awww they are beautiful Brenda, I am so jealous x

Awww Brenda, there just like kids straight in to the fridge to see what they can get. They are gorgeous, Your making me puppy broody. They are so much fun when they're that young, apart from the cleaning up after them.
Have fun
Tracy x

Oh Brenda, how super cute are little Daisy and Lily, love the photo of the fridge explorer!

Heres to many hours of playful puppy fun!

Awwwww Brenda what wonderful pictures I have so enjoyed seeing the pups boy have they grown it sounds like you are having so much fun with them lol. My new next door neighbour has just got a JR puppy and he is a beaut also a little kitten the JR loves to pull the kitty around by the ear lol, why I am laughing is the kitty actually likes it and keeps going back for more.
Hugs
Lorraine x

OMG!!! They are so darned sweet, have fun!!!
Debby

Oh puppies are always so darn cute! Love the one of Daisy in the fridge! She's gonna be a handful, that one!
R/

Oh Brenda those puppies are so adorable
Hugs
Francesca

love the pics Brenda, bet life is never dull at your house.
Friends of ours had just lost their 12year old longhaired golden retriver to illness and where heart borken. They have a little dog as well, but the other day we met then on the golfcourse walking a new golden retriever, from a rescue centre, they called him Buddy and he's a real prince, my name for great dogs.
Hope yours settle in well and you all have fun together. janex

Awww what gorgeous little fur babies!! Thanks for sharing such beautiful pics Brenda, it looks like you are going to have your hands full lol
Claire xx

gorgeous! And that looks like when my kids are in the fridge ;)

Ho wow, they are so cute!!! Really lovely!!
hugs
sadia

They are really adorable, you will have your hands full with them. Hope you have lots of fun times ahead, enjoy your new puppies!!!

Oh my GOSH! SO ADORABLE we have new a new cat and kitten sweet.

But two new puppies are you mad? ha ha so much work and so much fun too I bet keep us posted on them Love the name Daisy.

You do still have Burnie don't you? you house must be HUGE!

Oooh how adorable Brenda! I did laugh so much at the photo with that shy and retiring Daisy getting into your fridge! She is going to be one very big handful isnt she?! LOL!!

My daughter has got a choc lab who's 10mths and still VERY much the daft puppy! She cant wait for him to settle down a little, it would seem that her Murphy and your Daisy may well be related in some sort of doggy way!! lol!

Thanks for sharing those super gorgeous photos, I could never ever tire of seeing any of your super dogs they are all just fab!

I do hope the linen trousers work again for her tonight!