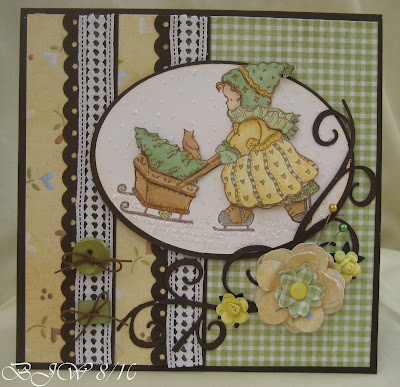 Good morning everyone, hope you all had a good weekend.A quick couple of shares today, just to prove I am still doing a bit of crafting.

Both are using the stamps from the new Penny Black Christmas 2010 releases.......the whole range is on the Penny Black website and also under the whats new section at Sir Stampalot......I am told they have now shipped from the States and should be arriving at 'Stampalot Central' any day now.

This one is Penny Black 40-027 Warmest Wishes which I have stamped three times with versafine sepia and embossed with detail clear, coloured with Copics and decoupaged, then added some snow using JudiKins snow white glitter. The DP is Nitwits and I added some borders punched with Fiskars threading water with lace overlaid. The large flowers is punched from the same DP, scrunched up and spritzed with Glimmer Mist dazzling diamonds, a couple of pre made flowers and swirls cut with a Sizzix die through the Big Shot, buttons, cord and pins to embellish.

This card is for the following challenges: 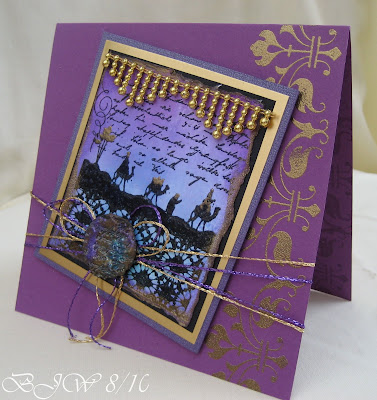 My second card used Penny Black 4112K To follow the star........I absolutely adore this one and have already used it ore that any of the other newbies and I think the trend will continue as it is so versatile.

I created a background using Big and Juicy hydrangea by placing the ink pad onto a craft mat, spritzing liberally with water then squidging a piece of cardstock into it. When dry I stamped the image with versafine back and embossed with detail clear, 'roughed up' the edges with scissors and embossed with detail gold. I also added a touch of gold embossing to the Kings using the same powder and an ink pen.

The edge of the card is stamped with Penny Black 3857H Footnote and again embossed with detail gold. Cord is tied across the card and a small disk made using several layers of UTEE and stamping into it with the script part of the main image stamp. Finally I laid a piece of beaded cord across the top of the image.

This card is for the following challenges:

Stamptacular Sunday - Two's better than one
Daring Cardmakers - Material Girl....take inspiration from a piece of clothing - the little cocktail number below courtesy of Monsoon - awful picture but it really is purple with gold and the jacket is gold as well beleive it or not, you would never know from the picture.

Such beautiful cards,I love the first,you've inspired me to hunt out my flourish die,It certainly makes a lovely card even more special. Hope you've had a lovely weekend,Julie.x

ooh , two fabulous Cards brenda , but i love the second.. its so rich and luxurious. love the jewel colours and the beaded cord - reminds me of a Yashmak
Lisa ;)

Gorgeous cards Brenda, I love the yellow and green with that cute Penny Black image. Your second card is just beautifultoo, so elegant. Thanks for joining us for our first challenge at Let's Ink it Up
Claire xx

Gorgeous cards, I do like Penny Black stamps and you have coloured this one beautifully, lovely DP too. Thanks for playing along for our very first challenge at Let's Ink It Up, good luck hope to see you again soon.

Gorgeous cards. wow the first one is so shabby romantic.
The second is just misterios travel in the desert.

Two fabulous cards love them both. Thank you for joining in Lets Ink It Up challenge. Annette x

Both these are so lovely, but the second one has to be my favourite, I love the richness of the colour scheme.

hi Brenda, these are a couple of beauties, love them both, but the bottom one is so different, I love anything different. hugs chris xx

Soo cute the first one with the little girl, the buttons and tiny pins...!!
The second makes me get a feel of dessert night by the fire!!
Love the way you find inspiration!!!
Lots of hugs lina

Gorgeous cards Brenda. Love the little cutie in the first but the second has blown me away. I want to try that now!! Hope you are improving daily.
Pinky

What a cute image and a great layout and colour scheme. Thanks for playing along at Let's Ink It Up.
Hugs
Sam xx

Adorable cards! Pefect colors and embellies! Thanks for joining us at Let's Ink It up! Hugzzzzzz

Two beautiful cards Brenda but my favourite is the second. It's a gorgeous stamp and I think it will be very versatile. May need to get one!!

Wow Brenda your cards are fabulous. Thank you for playing at Let's Ink It Up.

Two fabulous cards Brenda - love the soft cream and green on the first one, and the colours on the Three Kings card are absolutely stunning.
Love, Sylvia x

Hi Brenda, Gorgeous cards! I love the sweet image and fab colour combo on the first one and the the colours on the second card are stunning!

OMG, Your Card is stunning. I love the image, and colours.
Great Job!!!

Thank you for playing with us on the LET'S INK IT UP challenge. Good Luck!

These are beautiful Brenda love the deep and rich colours on the purple one - thanks for joining in with us at Daring Cardmakers too.

The black swirls look great against the yellow! Thanks for playing in our very first challenge at Let's Ink It Up!

Both are beautiful Brenda but I LOVE LOVE LOVE your second one, real Arabian nights. Those colours are so rich!

What wonderful cards Brenda. I really love the first image and the fabulous colours you have chosen - just gorgeous! Cheers Claire x

Both gorgoeus. Love the colours you have used on both. That purple is so beautiful, and I love the embellie made with UTEE. As usual I am inspired! I must give Janice a ring...

Gorgeous cards Brenda. I love the second one - the colours are fab and I love the image.

I love that image and flourishes on the first!!!

That second is great in purple and silhouette!

2 gorgeous cards, the first oh so cute , I could see on my blog yesterday but would not link to your blog....strange. janex

Oh wonderful cards Brenda, my fave is the first one, love the colours.
luv
Debby

Wow, how did I manage to get so far behind with my visits? I have been away for a couple of days but I must try harder, Lol! Mainly because I can see I've missed some fabulous cards.

Didn't miss these though and they are both gorgeous. I love the colours on the first card and the way you've decoupaged the image (stamped images are the only acceptable decoupage I think, Lol). The second one is suitable regal in that lovely rich purple and I love the beaded trim across the top.

Hi Brenda, wow love that image those PB ones are so cute and so loveable. Your done a brilliant job on your card the decoupage is gorgeous.
With love and hugs Shirleyxxxx

Brenda, your card are so very pretty...Love the sweet image and the colors...

Hi Brenda. I'm just catching up with all that you've been up to while I've been on my hols. You came home on the day I left!!!
All your cards are stunning as always, although what's this about Christmas!! I know the weather is yuckky but I think it's still Summer!! Yes I know we have to be prepared!!
How are the new arrivals settling in? Well I hope.
Hugs Lisax

Beautiful cards!!
Thanks so much for joining us this week at Stamptacular Sunday ♥ Good luck on our "2 is better than 1" challenge!
Don't forget to check out our Design Team Call!!
Dee (Spryte)
Sprytebyrds Spot

so gorgeous!!! Love the gingham on your cute card!!! Hugs Juls

Hi Brenda, yes its me, im finally back like a bad penny! i love you purple elegance its really lush. Mel X

Beautiful card! I love the layout.

Brenda, this is gorgeous.It is perfect for our 2 is better than one challenge. I love the colors, and the image siloetted is gorgeous. Thanks for sharing such a fabulous card with us at SSC.
Hugs xx
Carolyn

Well, it’s amazing. The miracle has been done. Well done.
Hat’s off. Well done, as we know that “hard work always pays off”, after a long struggle with sincere effort it’s done
===============
seo projects