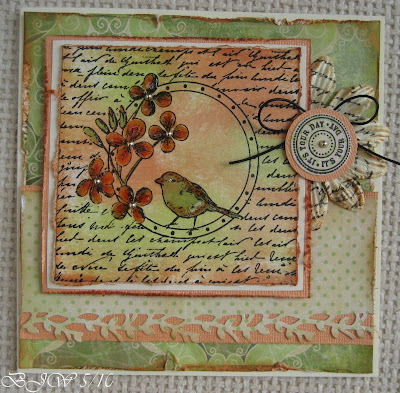 Hello everyone, Friday and only just getting round to posting what I planned to do yesterday and tell you about a bonus day at Stampalot yesterday.
Wednesday just as we were off to hospital my beloved MX5 went AWAL on me, no power, no nothing, so we used hubby's car and it was evening before I could call the RAC. But the good news is they could find nothing sinister in the tests and what they did find can be dealt with OK (won't go into gories). So a huge, huge relief, it's seemed forever waiting.
Mr RAC could not fathom the problem with my car so ended up having to take it to the main dealer yesterday. Apparently the battery was not holding a charge so they replaced it........I only had it new at Christmas, so what that's all about I have no idea. I just hope it's fixed because we are taking it to France......really fancy the journey across France with the top down.
So what did I do whilst it was in the garage, well Sir Andy Stampalot was a gem and collected me and I idled the day away at the shop and just by chance Chris and the gang (Mel and Judith) were in so we took over the classroom and did a bit of crafting.......well that's a fib really, I talked mostly and played with the new Sizzix Pro and dies, it's a wowser piece of equipment.
In full wedding plan mode this weekend, the bride and groom left for France last evening to arrange all the final bits and pieces, we go early Tuesday and the rest of the family follow in dribs and drabs during the week. The missing dress never showed so that one's still a bit in the air and the Matron of Honor might end up as a guest because matching a suitable dress is proving almost impossible, leaving only white, but that's not a real option with the bride in that colour. So the chief bridesmaid might be our girl on crutches.....who said my family did anything by the book ?
A quick card, not for anything specific, just a share of a Stampalot sample. A bit tardy of me but hope you will forgive all the details other than Hero Arts CG181 bird in a circle, Tim Holt rusty hinge and bundled sage, Martha Stewart woodland branch around the page and Basic Grey DP.
Posted by brenda at Friday, May 21, 2010

Sounds like the wedding will be a lot of fun! Shame for the Matron of Honour though :-(
As for the card well I think the colours are lovely and the cut order is really nice!

Gorgeous card and as the car malfunction wasn't too serious I have to ask this.... was it planned just so you could get a day's play in at Sir Stampalot??? I wonder if i could try it haha!!

What a beautiful card...really great!!!

Hi Brenda - glad the car was fixable .. it will be wonderful driving through france with the top down !( of the car i mean lol)
great card .. even with the bird lol
Have a great weekend
Lisa ;)

Hello Brenda,
Firstly, thank goodness nothing sinister was found in the tests.
I hope the wedding goes smoothly and everyone has a fantastic time.
Another fabulous card!
Hugs, Clare x

Just gorgeous card Brenda and I really love that stamp so might have to do a shop soon.
Glad to hear all went OK with your hospital visit which must be a great relief.
Sorry to hear about your car, it's such a nuisance when they go wrong.
If I don't get a chance to say before you're off hope you and yours have a lovely time at the wedding.
xx

I envy you the thought of driving in France with the top down (as long as I wasn't the one driving, lol) Hope the wedding goes ok, do let us see some pics.

love the card here it is amazing. I think I am going to treat myself to a Big Shot....!!

Brenda your card is flawless as allways!!! Don´t swet not writing all of the steps you did with the card...you allways spoil us with that( very glad) and some times you need a break and just post a picture of your gorgeous work!!
I hope the wedding is a huge sucess for all involved and I´ll be thinking of you goys over in France!!
Have a happy trip there!!!

oh glad you got your card fixed hun,and as for this card wow hun this is just incredicable,love it super detail and a pleasure to look at hugs cheryl xxxx

That IS a pretty stamp Brenda and a great card. Good news about your test results too - I can imagine the relief. Just go and enjoy the wedding now and lets hope there's no more hitches!!

Hi Brenda! Wow--you're busy! So glad your tests went well at the hospital....then your car! Why do things always seem to happen at once?! Sounds like a wonderful wedding weekend--enjoy! Oh--and your card is beautiful! Take care!

Gorgeous card Brenda, love the little birdie and the MS punch. Have fun at the wedding xx

Nearly time 'cause the car will be fine the trip easy and the wedding WOW.

Card its that stamp again love it and the colours yum.

Hi Brenda, sorry to hear that the car let you down, but glad to hear it wasnt anything to drastic and that the hospital visit wasnt as bad as you feared.
I do hope that the dress does turn up but it does sound a bit of a mystery, anyway love hope the wedding goes beautifully and no more hiccups.
I envy your trip to Sir Stampalot it does sound as though you had lots of fun, and your card is stunning. With love and hugs Shirleyxxx

Hi Brenda
and what a great day we has too, lots of nattering nibbling and crafting what more could a girl want!!
card is so so fab, I defineately think you should keep doing the circles.
hugs chris xx

Beautiful card, Brenda! Love the circles on this one - that stamp is wonderful! Good to hear your appointment went well, and I hope the car is feeling better too. Hope the weather stays fine for your drive across France x

Hi Brenda - this card is fabulous. I love that stamp and the colours are gorgeous.
Hope all goes well for you all during the coming week. Have a good time.
Beryl xx

Fabulous card Brenda - so many lovely details and wonderful colour! Thanks for poping by on our Birthday blog hop at C.R.A.F.T. Cheers Claire x

Lovley card. You are so lucky to have a day of crafting and playing with new bits and pieces. They are good at Sir Stampalot. Bet your glad the wedding is nearly here now. See you soon Nicky xx