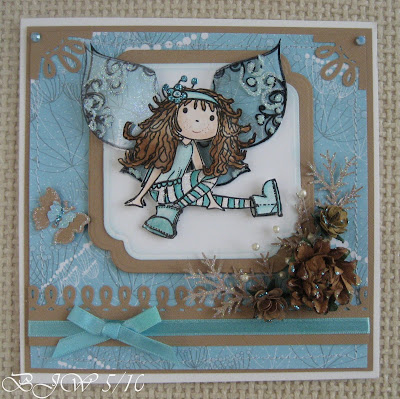 A scheduled post and all going to plan we are in France and tomorrow is the wedding........our second eldest son and his French fiancee are getting married in the beautiful surroundings of the French coastal fishing village of Saint-Gilles Croix-de-Vie.
Although she had lived in the UK for many years, her Mother still lives in the French village, her Father in Paris, so it was decided they would return there for the wedding. I think the fact that the surf is good on that part of the coast might have played just a tiny part in our boys decision to suggest that as the venue. I have visions of him arriving at the Church still in his wetsuit and board under his arm. And of course the honeymoon venue of Barbados is also well known for it's good surf, so you decide what swayed the decisions ! More about it all in my post tomorrow.
Today is Polkadoodle day and for this weeks challenge Lou has set us the theme of "Sew & Sew". Not my hot point, but I did managed a line of stitching round the edge of my backing paper which is from the new All Around CD. The fairy is Grace, one of the Fairy Flutterfy stamps, which I coloured with Copics and decoupaged. Her winds are stamped onto the same paper then again on acetate and glittered. Martha Steward double loop border and Magnolia flower plus a couple of others and some glittered leaves.
Posted by brenda at Friday, May 28, 2010

Beautiful card, very funky indeed. hope your having a marvellous time in France!

Beautiful card and hope it all goes well. Anesha

Beautiful card - love the little fairy's wings!
Will be thinking of you all tomorrow,i am sure it will be a wonderful day
Lisa;)

Gorgeous card and what an adorable fairy. I hope you all have a wonderful day tomorrow
claire xx

Gorgeaus card, I love your use of the MS punch. Have a lovely time in France xx

What a beautiful card Brenda. Lovely image (dig her boots) and I love how you've done her wings too.

Oooh, I bet you're having such a wonderful time. My very best wishes to your son and his bride. I hope you're going to share some piccies when you get back!

This is a brill card, love the effect you have achieved with the wings, have a great time in France.

A gorgeous card Brenda. I do love that colour combination and the fairy is so sweet. I hope all the well laid plans go off without a hitch for all of you.
Beryl xx

What a fantastic card. Congrats to your son and new daughter in law. I hope the day is a great one.

I just love this little cutie!!!! Really great colours and everything else too!!! Hope all goes well for the wedding, Jo x

Gorgeous card Brenda - lovely colours and image and another beautiful flower spray. Enjoy the wedding and hope the weather's going to be better there than it is here!

Gorgeous card Brenda.
Hope you all have a lovely day tomorrow.
Rosie x

Hi Brenda
hope your having a good time, will be thinking of you tomorrow.
your image looks a bit of a so and so!!
hugs chris xx

Very funky fairy and I love the colour combo.
Hope the wedding goes well as I'm sure it will.
Pat xx

Beautiful card and colours Brenda. I really hope you have a great time at the wedding. It sounds wonderful.x