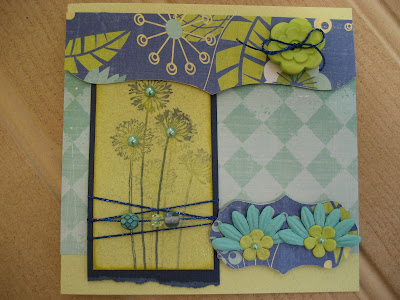 Before I move on to my card, thought I'd better update you on my second opinion this morning as lots of you have kindly asked. Whilst nothing is certain at this moment, they have agreed the previous guy's proposals were rather radical ........ I'll say, removing all my front teeth. Lots of xrays which they are going to assess with a view to starting remedial treatment next Thursday. To be honest I haven't asked too many questions, prefer not to know exactly what they are going to do, sufficient for me at this point to know they are going to try and repair the damage to save my teeth, rather than take what they called "the easy option" suggested last week. So I am more than pleased that I pressed for this second opinion.

On to my card which is following another super sketch on ICS this week, a bit different and lovely to work with. I worked a bit in reverse with this one as I had decided I wanted to use a DP from Fancy Pants ........ two weeks stroking is enough I think ? I cut the top band and bottom tab using Cricut storybook, then laid a piece of the reverse across the middle of my base card which is a nice limey green which picks out the buds on the DP.

The image is Stampendous N152 stamped with Brilliance med blue and olive, I then inked the whole piece, which was an offcut from my main card, with versamark and embossed with detail clear giving a nice sheen to the image. All finished of with some blue cord, flowers, buttons and gems. All in all quite a quick simple card.
Posted by brenda at Thursday, July 09, 2009

Love your pretty card Brenda and the stamp is just gorgeous! xx

This is gorgeous! Love those flowers and the colors are fantastic. Yikes, dentists are scary....good luck!
-Ann

So glad your second opinion worked out Brenda. I know it's still not very pleasant but try and keep cheerful if you can. Our thoughts are with you.
Your card is as beautiful as ever. I love that Agapanthus stamp.
Take care

lovely card and I love the colours especially!
Dazie
x

The second opinion definitely sounds more inviting Brenda, hope they sort you out soon. Love the card, never ever stamp in any other colour than black! Must give it a go. You always make your cards look easy.
pinky

Hi Brenda, I sincerely hope you manage to get your teeth sorted out, dont let them take them out if they dont have to, as you carnt have them put back afterwards.
Your card is gorgeous and I love the way youve stamped the image, it really makes it look misty. The papers and details are stunning. With love and hugs Shirleyxxxx

Good news from the second opinion. Don't blame you for not wanting to know what they will do - "ignorance is bliss".

Your card is beautiful. Such gorgeous colours and I love how you have used those beads.

Cute card! I love these colors together! And the beads on the string is really unusual but lovely! It really is a nice touch. I will keep that in mind for future cards!

Love the elegant design Brenda. Just stunning.
Thanks for joining in at ICS, always a pleasure to see what you create with the sketch.
Dx

This is just beautiful

Your card is `beautiful` Thanks for joining in with ICS this week:) x

Wow Brenda, I've not had time to check the blogs I follow this week and what a lot I've missed on yours.

They're all fabulous but I especially like todays and the one with the little girl. I love the colour comos you have put together.

Christine (All She Crafts) said...

Love the colours, love distressed harlequins, love the stamp (thought about using that one last night on a thank you card for someone), love beaded wraps, love torn cs mats.. Brilliant! :o)

OH it's turned out beautifully Brenda! Love these FP papers and you did a very lovely job with the sketch. Thanks for joining us! :)
♥Dawn♥

This is so pretty! i love the soft color pallet you chose. Thanks for joining us this week at ICS!

beautiful card! thanks for playing along at ICS. so glad your second opinion worked out! good luck!

Beautiful colour combo and wonderful use of ICS #24!

Good Luck with everything!

I love the colors! I also enjoyed how you used so many flowers