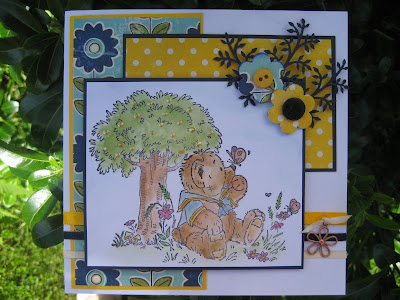 Good morning everyone, an early start after a super days teaching at Stampalot yesterday and a yummy new punch I am going to share with you shortly (and they still have some in stock if you 'need' one). We had a fun day and the girls created some fabulous work - one of two were reluctant when I said we were going a bit messy, but persuade them all to partake in a bit of inky stuff with Tim Holtz distress inks, watercolour card and lots and lots of water. Think some of them will be trying it out again today at home.

Still trying to catch up on absent posting of new work, so starting with this weeks Penny Black challenge which has a recipe "3 ribbons, 2 flowers and a charm/pin. This was easy to tie in with yet another great sketch over at Friday Sketchers and Stamping for the Weekend which asks you to use masking on your card.
So, where do I start, the masking I think which is using the tree and teddy stamp from Penny Black 30-304. Teddy and the flowers were masked then the tree added and both stamped with versafine black and embossed with detail clear. I coloured in with Marvy pens, was going Promparkers but I'm still finding it slow going with them and need to take time and wanted to get this one done and posted. My DP is a really pretty double sided one from October Afternoon and I also punched my two flowers from that. Now the leaves, these are cut from the lovely new punch Andy at Stampalot acquired for me, it's from L-em.com and is so like the MS one I have been hankering after for months but which doesn't seem to be available in the UK.
Finally added the three ribbons in graduating widths, some buttons those punched leaves oh and yes, the charm.
Posted by brenda at Saturday, July 25, 2009

wow brenda...up with the birdies this morning and such a gorgeous card....love this cute ted..thanks for joining in the fun again this week at PBSC...Hugs kath xxxx

Awe what a cute teddy, he looks so cute sat there under his tree, love the flowers and other details you've used on this one.
Thanks for joing us this week on SFTW.
Hugs
Sheila xx

Absolutely beautiful! Love the yellow and navy colour scheme and your image is adorable.
Sharon xx

Oh this is so cute!! I haven't used this stamp set yet, but you make me want to break it out! Great card :D
- Ann

Wow - first past the post for you today then!!! I take it you are feeling much better now?

Love you PB entry. Great colour choice and that bear is just so gorgeous!!

I found your butterfly!!!

Have a great weekend.

Beautiful card, Brenda! I love the cute bear and the scene you created with him. Fabulous paper and flowers with the buttons in the centre.
Thank you for joining us SFTW this week and good luck! :)

Wonderful card, Branda:O) Love the gorgeous papers and flowers. You have done a great job on the masking, lovely image!
Thank you for joining us again at SFTW. Good luck!
Nancy;O)

A beautiful card Brenda and I love the teddy under the tree, so cute. Great papers and the flowers look lovely. Thanks for taking part in this weeks SFTW
Clairex

This is adorable, love the image and the cheery colours. Your colouring is great and your flowers are cute cute cute!!
Stephanne

oh gosh Brenda what a beautiful scenery you have created, wonderful masking and coloured to perfection a truly beautiful card altogether. Thank you for joining in with this weeks masking challenge over at SFTW, good luck xx vicki xx

What a fabulous scene, the image is so cute, and you have coloured to perfection. I love the flowers and layout.

Beautiful card and I really like the layout. Really cute bear stamp, and to have him sitting under the tree is perfect! Your papers are fab, nice and bright!

Thank you for joining us this week at "Stampin' for the Weekend", We hope you had fun making your card and hope to see you in the future for many more challenges! Good Luck!

Fabulous card Brenda, love the little ted and tree, I've got those stamps and have yet to use them, but your card makes me want too. I also love the papers you've used and your flowers and leaves. I didn't realize that punch was so hard to get when I got mine......glad I got it when I did then.
Thank you for participating in the "Stampin' for the Weekend" challenge again this week.. Good luck and we hope you'll continue to join in on the challenges on a weekly basis. Have a great day.
Donna xx

What a brilliant card Brenda. I love the DPs and that image is just sooo cute.

Oh wow hun this is gorgeous, love this adorable Ted and a fabulous card you have created with him.. thanks for joining in the fun this week at PBSC
hugs
Tracie :)x