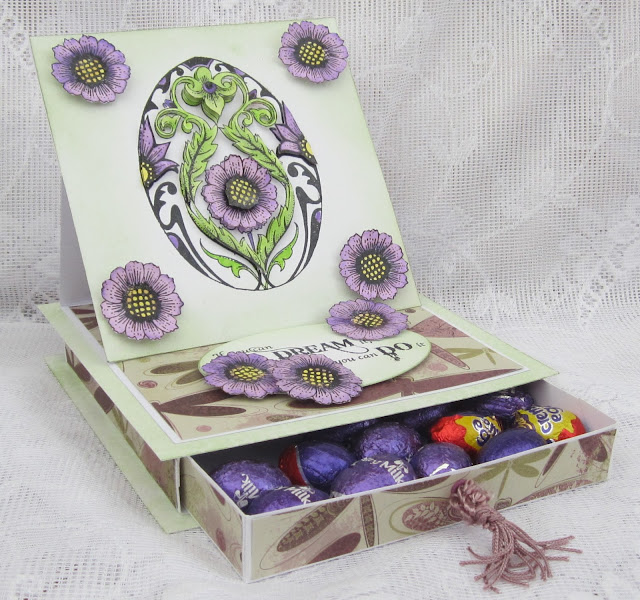 I decided to make an easel drawer card and fill it with some mini chocolate eggs, it's ages since I made one of these and was more than a little shocked to see how long ago it was when I did the tutorial for it here (should you fancy making one)..............where on earth did those seven years go ? 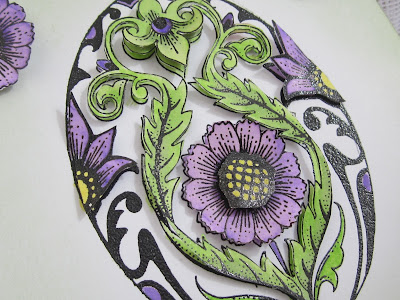 I digress, as usual you will find all the details form making this one over at the CB DT blog along with the link to the gorgeous Russian Floral Egg which I used. 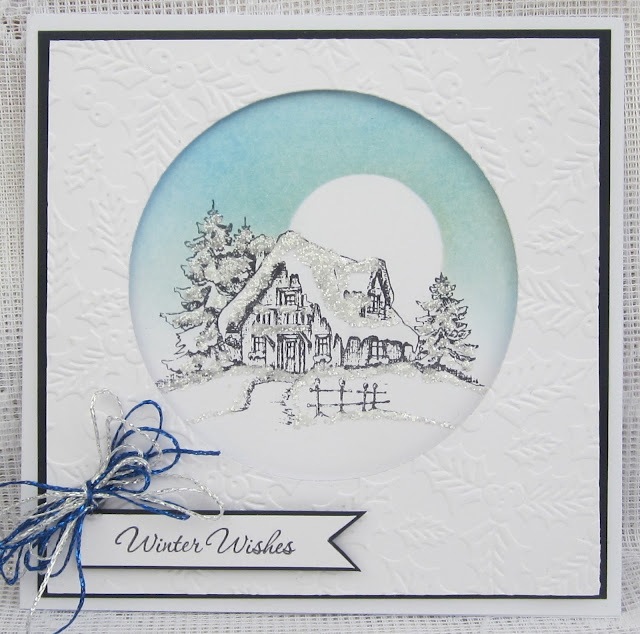 The April Rudolph Day's kicked off yesterday over at Mo's blog and again I am all prepared. Mind you I may not be quite as keen on making Christmas cards in another month or so as the time has come to start preparing samples for the Christmas TV shows, every year they seem to start selling Christmas products a bit earlier than the previous year.

It's a pretty quick and simple card using an Inkylicios image stamped in black archival, some Pan Pastels for a little colour and snow glitter, then an aperture cut into a top panel which I embossed with a holly folder, a stamped sentiment and some cord and finished. 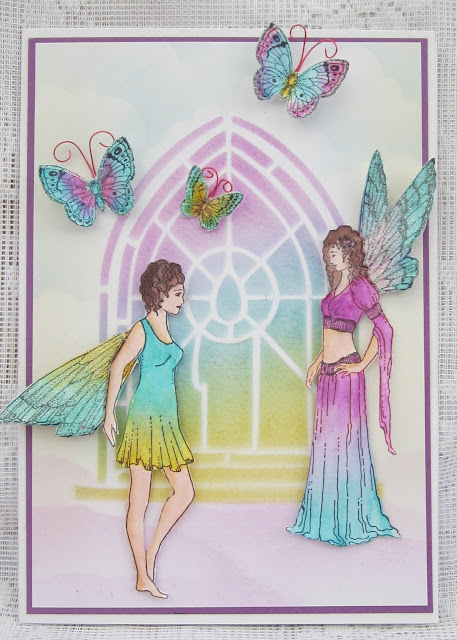 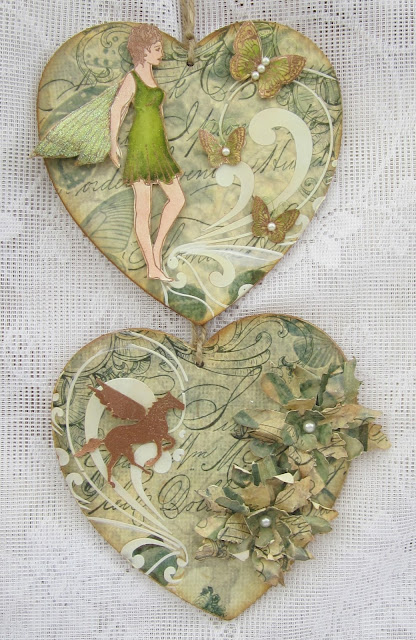 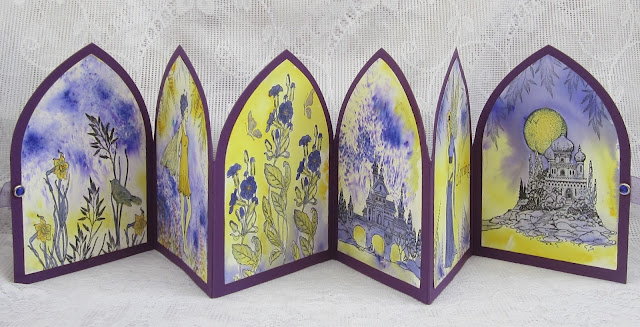 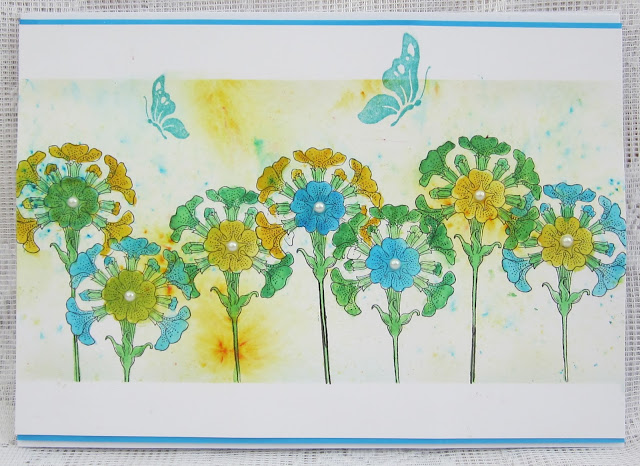 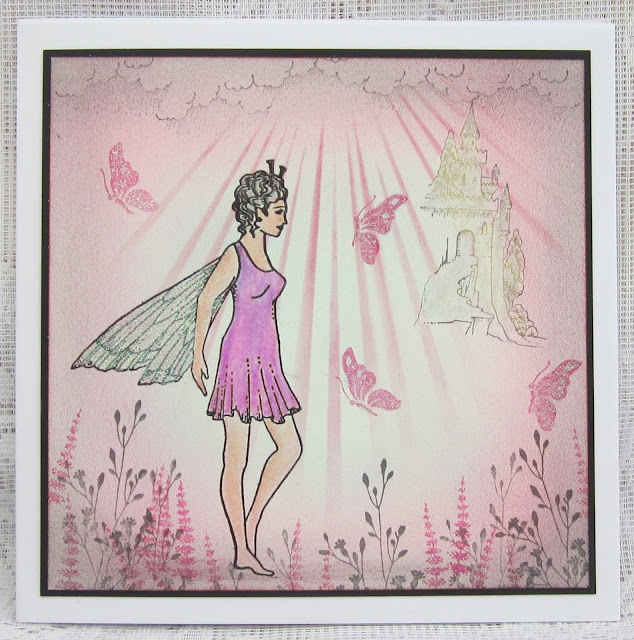 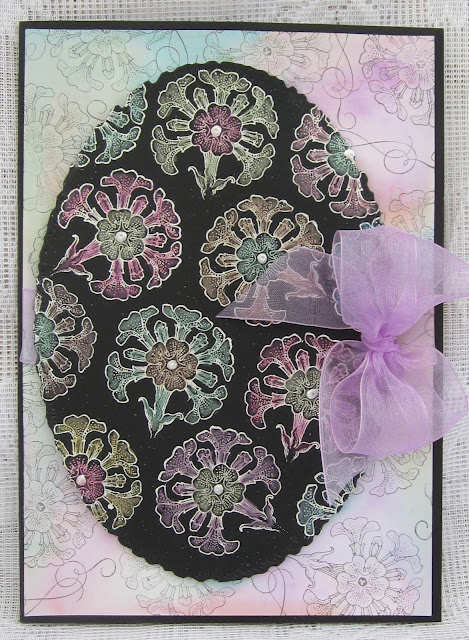 My thanks as always for popping by today.

wow stunning projects and gorgeous cards you have made Brenda.
what a work you did love it.
Gr Karin

have been very remiss in my visiting lately. love the box, especially. Take care,hope things are ok with you. xx

Beautiful creations and awesome eye candy once again Brenda. Adore the choccie gift box.
This will also be perfect for one entry as an anything goes creation for our challenge below.
Hugs
Desíre
{ATG with a CREATE WITH TLC Element}
{Doing Life – my personal blog}

Right try again my internet is on and off and keeps saying error when I post comment-love all the beautiful cards,and quite a few years since I made an easel drawer card too,love the delicately coloured Fairies and gorgeous hearts-I saw them in the background on the programme and kept hoping they would show a closer view
Carol x

Fabulous creations Brends. Your easel card with those yummy eggs is wonderful and I love your christmas card. As for your fairy samples, they are so beautiful but I especially those gorgeous hearts xx

Lovely cards today Brenda, I especially like the fairy ones

wowser these are amazing , you have been a busy crafty lady Brenda . Trying not to look at the chocolate eggs , I'm on a diet . I love every thing you have made , the Christmas card is so lovely .jane x

Wow all CB-beauties! Had a chance to see the shows oon my PC and think the samples are so great! Your GDT piece is such a beautiful way to use the egg! A real treat this post! Hugs, Gerrina

Ohhhh what a beautiful cards Brenda! I love it!

Wow you've been busy again! What a fab idea for Easter treats! Gorgeous design!
Fab wintery card love the little scene and twine bow! And all your fairy makes are so enchanting and gorgeous!
Lucy x

I'm just blow away by this beautiful selection of absolute gorgeousness! That box is amazing.

A fantastic collection of cards and projects here Brenda. I love the top one with the lovely cream eggs (my type of gift) and the beautiful winter scene.

Beautiful cards, love that concertina card - purple. Those fairies are beautiful. You have been a busy lady.

Fabulous cards. Love them all, but specially love the card with winter scene.
Valerija xx

Wow! you have been busy and what stunning makes! I especially like your Christmas card! The soft palette and pretty scene and I have to say Chocolate baroque are stunning too.

Oh wow!!! Thank you so much for sharing all these beauties, Brenda!! You always stunning me with your fabulous works! I'm just in love with the elegant and impressive easel drawer card, it's just amazing! Thanks for the tutorial! Love all the fairies makes, (and I always love fairies!), expecially the vintage heart plaques! Fab concertina card, love that shape and your use is so inspiring! Really pretty all the cards, you used CB stamps in a really amazing way!
Hugs

You're an amazing crafter, Brenda--love seeing what you come up with! The treat box blows me away & the Christmas card is elegant & stunning!

So many gorgeous creations! The elegance you put into these are so wonderful! I really love the box for the chocolate eggs...they are a weakness of mine at Easter time. Hugs and prayers, Robin

Amazing creations, Brenda! Thanks for the link to the easel drawer card - I'll have to give a try. Gorgeous Christmas card, such a beautiful scene and I love the embossed frame.
Visiting your blog today with my Rudolph Days Guest Designer's hat on. Thanks for joining in the challenge - Good Luck! xx

Look at you on a roll and what a feast for the eyes! I watched Chocolate Baroque on catch up today and saw so many of your gorgeous cards. The ones on this post are so beautiful with amazing colours. Your Rudolf card is lovely, with such subtle colouring and I love the ones with the fairies on. The box with the eggs in is fantastic and your colouring on all of the is superb. You've really spoiled us all with this post and I couldn't choose a favourite if my life depended on it. Crafty hugs, Sandra x

Stunning creations Brenda, all so different.

Well go to the Top of he class, what a fantastic array of wonderful creations. Great images, fabulous colours, super designs and gorgeous backgrounds.

stunning work!
love it all!
hugs

wow, such an array of beautiful creations brenda! i love the embossing on your rudolph day card; it really makes the image pop and i love the colours and layout too. so glad you could share it with us at the rudolph days challenge!

all are stunning projects brenda,your colouring is amazing

Beautiful creative work B, love them all. The Baptism was just lovely and Baby Sofia Maria was a darling....too cute in fact.xx ♥[aNNie]

Oh these Re lovely. Have to admit my fave is the Christmas card, simply perfect

Wow you spoil us with your amazing work These are all stunning and that Christmas card is very classy a beautiful special desin I love it. Love and hugs Carole x

More fabulous makes. Especially like the colours of the last one. Hugs Mrs A.

OMG Brenda, you have out done yourself with these samples, wow, I don't know how you find the time and they all look just so perfect, - stunners all of them!!

Stunning makes, Breda, each and every one!
I am so in love with that blue and yellow one that folds open like the many pages of a book.
Your creativity always amazes me!

The Rudolph entry is beautiful. I can see the sparkle of the glittery snow, and love the sky you created behind the image. setting it under the aperture really showcases this gorgeous stamped image.

Thanks for taking part in the April Rudolph Days Challenge.

Oh what gorgeous cards Brenda, love the easel drawer card with the beautiful coloured egg. The Christmas card has a fabulous stamped image (think I need to get this stamp!) and the first of your fairy cards has fantastic colours. Love them all.

You have been busy again Brenda, such a lovely selection of cards and projects. I love your little drawer set the stamps are just stunning xx

Oh my, Brenda! These are amazing! I love all the different styles and techniques, and the way you make one card so different from all the others. Your winter themed card is so peacefully and serenely unique with the soft sky line and elegant whites. Your Easter goodie drawer is FABULOUS with the intense colors of the season. Gorgeous cards, my friend. I love it seeing how creative you are... xo

WOW Brenda your creativity knows no limits...not only is the easel a mindblowingly beautiful creation but the hearts project, the colorful fairies are nothing short of mesmerizing!!
Thank you so much for joining us at the Rudolph Days Challenge!
Rudolph Days Challenge DT
Dr Sonia

WOW Brenda! I first saw your lovely set of cards in the post above this. THEN I saw your stunning chocolate box! Love that! Thank you so much for your lovely comment on my Blog too. I know how difficult it is for you, and do appreciate it. I hope your weekend has been a happy one. Judy x