Magnolias, another trip to Russia and more garden blooms 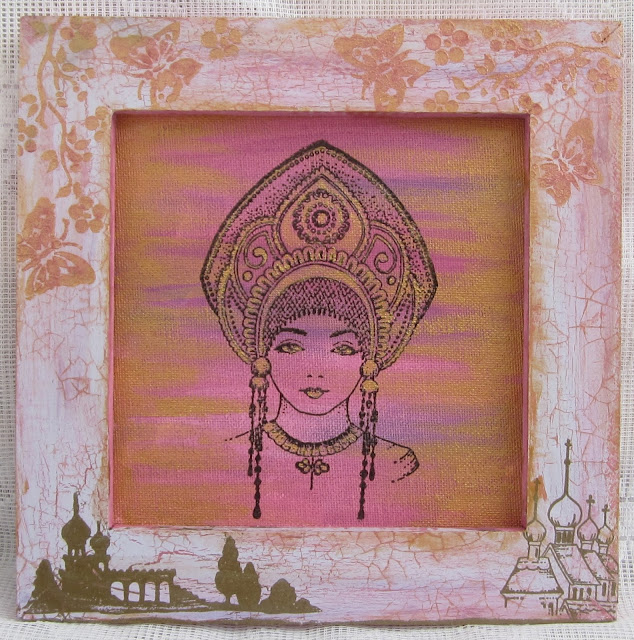 Morning Peeps, I am back with another Guest Design creation which you can also find over at the Chocolate Baroque DT blog and as all of the information and links to the stamps I used are on the DT blog, I won't bore you with all the details again.

I also have my Penny Black mid month creation which I should have posted yesterday but somehow I got my dates totally muddled........it doesn't take a lot !! And further down a few more photos from the garden as things come into bloom.

These stamps featured in the Hochanda shows at the end of March and all have a strong Russian influence which having visited Russia a few years ago had a very special appeal. All of the new stamps are beautiful and as always were a joy to work with so today's post gave me the perfect opportunity to get some of them inked up again.

My framed canvas features the lovely Katya, Russian Palaces and crackle background (which I added to increase the crackle pain effect).

Moving onto my Penny Black share I have used old time favourite Dance, Sing, Love along with one of the new releases Magnolia Rhapsody. It's a pretty simple make, stamping first the sentiment with black archival and then using distress markers to ink the stamp and spritzing with water before repeat stamping. Matted and layers and finito. As the pink matting layer has been gutted I think it should fit into the current Snippets Playground. 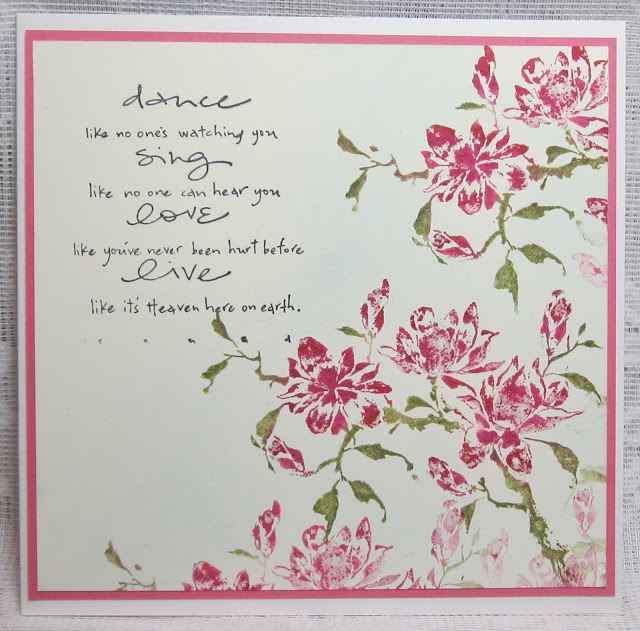 And as promised more blossoms from the garden, it is never my intention to capture a Lab or at least part of one in almost every photo I take, there just always seems to be one very close by. 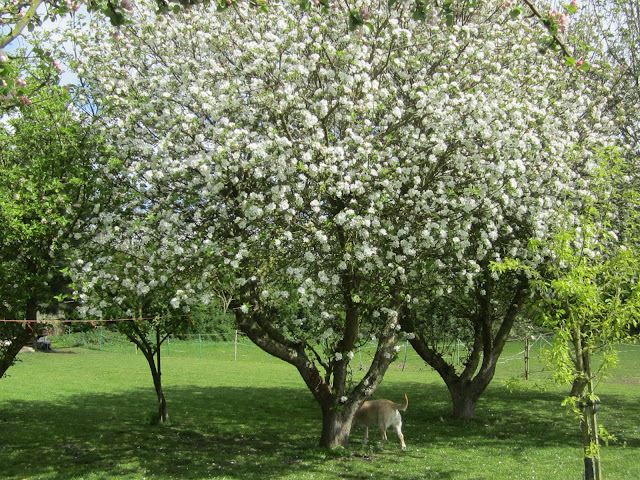 There is an absolute profusion of blossom on this apple tree (as well as Daisy underneath), I just hope we don't get the Fen Blows in the near future.......being so flat here in the Fens when there's been a dry spell it doesn't take much wind to whip up the soil and along with it newly seeded fields, young forming fruit and so on and is known as the Fen Blows 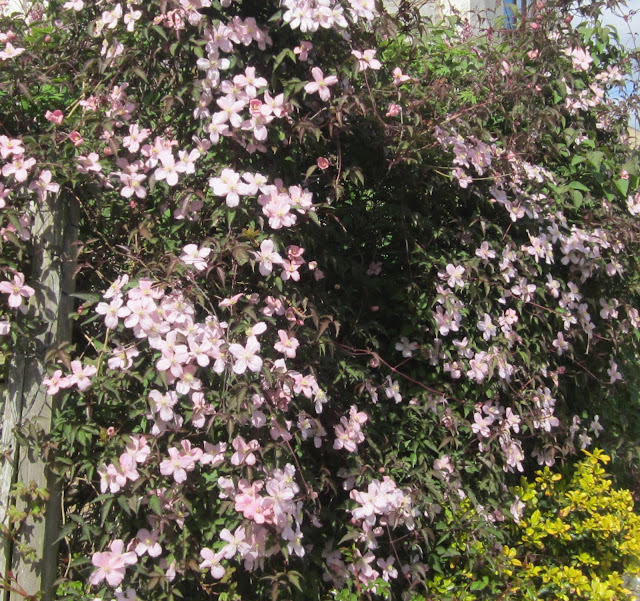 Clematis Montana, this is the first of several to come into full bloom although I don't think the blooms are quite as prolific as last year 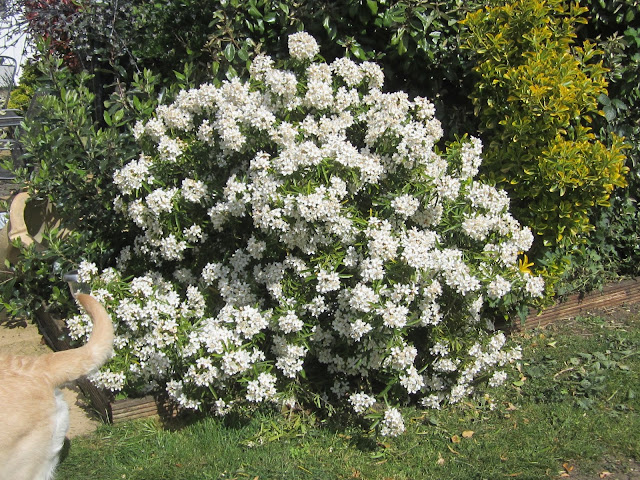 Choisya Dewitteana Aztec Pearl and the perfume is glorious.......there goes another Lab 'bum' 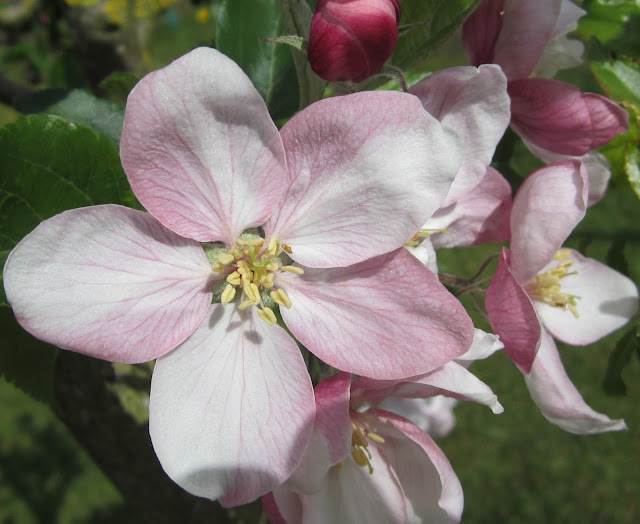 Apple blossom but no idea of the variety of this one, it's been in many years 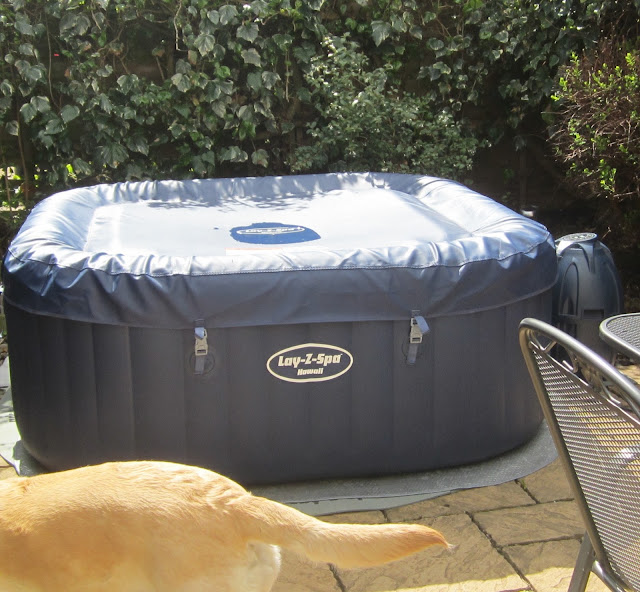 Yet another Lab in the scene.......and this is what the Easter Bunny delivered - aka daughter, it's been at a very acceptable 38/40 deg since it was installed. The decking surround still has to be put in place but it's a welcome addition to the secret garden. It's supposed to be for six people but I think that would be a tad cosy, but works nicely with four

Thank you so much for popping in today.

Adorable post. Love your wonderful projects and beautiful blooms photos. The sentiment on your card is just great.
Have a lovely day.
Valerija xx

Love your projects. Your garden is looking stunning. Have a great week.

Beautiful makes, love that sentiment. Stunning blossom. Our montanas are just coming into flower but like yours not as many flowers as last year

beautiful card and project Brenda and a fab hot tub enjoy it.

I love your beautiful frame and Katya and also the gorgeous card too. Fabulous photos of your garden, I have a Montana Clematis in the garden too and it does look great when it's in bloom. The Easter bunny was generous when he called at yours this year.

Love the frame and beautiful image,great sentiment and beautiful distress inked image love the sbrubs and trees,you have a beautiful large garden and a good harvest of lab bums lol
Carol x

Beautiful projects! I've enjoyed reading your post and seeing all of your photos! What a lovely garden--I can see where you get your inspiration! I wanted to take a minute to thank you for your visits to my blog as a DT member; I enter so many of the challenges you design for! I appreciate ALL of the comments you leave!

Beautiful card and lovely framed image. Gorgeous photo's it's so nice now all the blossoms are coming out.

Amazing canvas with the beautiful Katia, and love the crackled background! I have already admired your sweet card on Penny Black challenge, it's so lovely and spring like with these colours and the technique you used!
Thanks for sharing all these fab photos of your magical garden, it's just amazing with all the sweet flowers and how many blossoms on the trees! LOVE it! You are so lucky to have this paradise! Hope that you have a lot of fruits this summer and enjoy your new addiction in the garden, your daughter have had a really good idea! :D
Big hugs!

Gorgeous pics B.
Loved both of these makes too - can't pick a fave - one of these days I am going to come and raid your stamp collection!! xx

Wonderful cards B - love the way you inked up the snippets card so perfectly! Love your photos (including labs bums - smile) - and our clematis Montans is just blooming here - along with the Choisya. But we're lacking a hot tub - I'll be over with me woolly cossie at the weekend! :)

oh my goodness Brenda, those beautiful photo's of your trees in blossom, the Clematis, flowering shrubs and doggy woofs, - a beautiful garden - aren't the simpler things in life the best? - I almost forgot about your artwork - superb as always!!!. Enjoy the sunshine we are having, xxxxxx

What a sweet Easter Bunny came to your house--enjoy! The first card is so artistic & the PB card is gorgeous! Always love seeing your pictures of the garden & the lab bums! Our Gravenstein apple tree is now in full bloom & the row of cherry blossoms our neighbors have are just stunning! Happy Spring, Brenda

Lovely cards and your garden is bloomin' beautiful (geddit!?) LOL!

I like the look of your new addition too!

What lovely creations Brenda, love them both! Great pics of your garden and the labs (or parts of) add the human touch! Enjoy your spa days!

Sigh, your spa looks very inviting! We just put the solar panels back into action for our pool, last week. Hopefully in another two weeks it will be warm enough for me to stretch in. Your creations are wonderful, Miss Brenda! So colorful and interesting, and truly artistic! The blooms around your home are magnificent - it must smell so good outside! The smoke has shifted direction with the wind here, and now I can smell the magnolias and gardenias from up the hill! Your labs look happy and are lucky to lounge in a yard like yours. Please take care and thanks for sharing your homestead! love, de

Beautiful cards as always Brenda, love that new Penny Black stamp!
What a nice and thoughtful Easter gift! And loving your blooming trees!

Gorgeous creations and lovely photo's. I wouldn't share my jacuzzi with anyone other than my hubby...lol people think me strange......

Beautiful cards! I am loving that new Penny Black stamp! Those flowers are gorgeous and that sentiment is always perfect! Hugs, Robin

Two wonderful card, both with great colours and images. The trees look very majestic and to be honest I hate it when these tree's blossom as I know it is going to get windy and they don't last very long and true enough it happened again this year, I feel so sorry that they can't live out their splendour for very long.
What a great Easter present, hope you make great use of it.

Gorgeous cards Brenda, love the crackle effect on Katya. Lovely snaps of your garden coming to life.the scent of Choisya takes me back to being a girl, Mum and Dad had a couple in the garden. What a fab Easter egg...no calories and will last for ages!! xx

Great way to use Katherina like this; it will be a great inspiration every time you see her! And the blossem on your PB-card looks just as light and soft as the blossem I see here in our street; it is beautiful! Hugs, Gerrina

your cards are so nice!
and photos are great!
thnkks for sharing wit us.
I love your labradors
hugs

Both wonderful creations Brenda. Stunning design for your frame and I love the sentiment on your card.
Fabulous photos of your garden and I'm sure you'll all have some very happy relaxing hours in your super new spa xx

Keep It Sweet and Simple said...

Another stunning Russian card and the lovely subtle and elegant PB one. Great addition to your garden - how fab x

Fabulous garden pictures. Now is my favourite time in the garden. Hugs Mrs ?A.

A beautiful card Brenda. I can see where the inspiration came from with the beautiful on your trees.
Have you tried your Spa yet. I'm sure it will help to ease an assortment of aches and pains and I am very jealous.