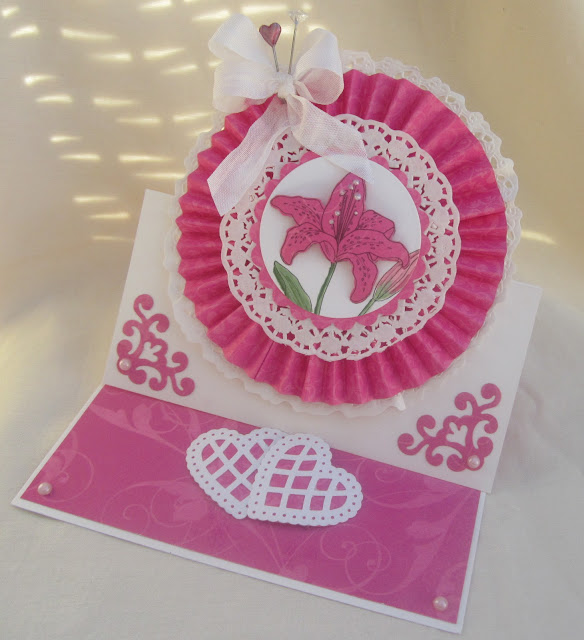 Hello peeps, two post on consecutive days is a bit of a rarity for me nowadays, but the sun was shining and I got some decent photos of a batch of cards I've been waiting to take photos of for days, so thought I would share one.
I have used Ruth's A Passion for Stamps Stargazer Lily..............when I first went on her DT she asked if there were any flowers I particularly like, well I love all  flowers as you know, but lilies have to be one of my favourites and a few days later Ruth had drawn this lovely image.
I had lilies for my wedding bouquet much to the horror of my elderly aunts......... in those days you most definitely did not have them for weddings. As we married in October they had to be sourced from France as they were out of season, now they are available year round as standard and our daughter had  them for her bouquet when she married on the same Saturday in October as us.......not 'the' same Saturday of course, twenty odd years later.
I used a sheet of Bo Bunny DP to create the pleated rosette, which I mounted onto a doily, then used another smaller one to mat the flower onto.......these pretty little ones are available from Sarah at Pretty Little Ribbons, as are the pins and seam binding. I printed the lily out a second time onto the same DP, cut out and decoupaged. Two hearts using an MS punch and corners using Spellbinder Fleur de Lis.
Now this bit really is more than a rarity, I am going to enter my card into a challenge, it's almost a year since I did so as these dodgy eyes of mine have great difficulty dealing with all the links, but as I seem to have used several of Sarah's products I am going to give it a try and enter it for:
Be My Valentine theme at Pretty Little Ribbons challenge
Have a good day everyone and as always, thank you so much for popping in, I really do appreciate your visits and kind words.

I love the rosette ruff its gorgeous, the wee doily effect topped onto it and the hearts which carry the theme along. Really beautiful card Brenda, hugs Heidi x

Wow Brenda that is truly beautiful I love your image in the centre and the rosette around it is gorgeous. hugs Shirleyxxx

Brenda, this is a stunning card!! I'm taking a mental picture of it to make one just like it!!! Thank you for inspiration!!!

this is just gorgeous!! Loving the hot pink! Hugs Juls

Gorgeous gard and cheery!!!
Good luck in the challenge!!!
Paula

Wow!! I feel proud of this and I didn't even make it!! You've certainly made a lot of cards with that lily since I drew it!!It's a stunning card! Ruth x

this is stunning Brenda.
Do you enter challenges? This one fits Hotshot Crafts challenge, ....easel cards

oh this is pretty, i love the rosette topper
Lisa x

so beautiful...love all the detail on this card..

Stunning Brenda...such a pretty flower and I love the colour choice too hun :o)

have a great evening...hugs Vicky xx

O wow Brenda, this is absolutely stunning, love the flower stamp and the rosette on your card .. so very elegant xx

Really lovely card Brenda! I had dried flowers as my bouquet well sort of they were made from skeleton leaves and bark and things, I loved them to bits and hoped they would last forever...alas they fell appart long ago - just aswell we are not all the same eh! I hope 2012 is a good year for you especially healthwise - take care. Cheers Claire x

a gorgeous card. I love the image (lilies and irises are my favourite flowers)and the rosette is wonderful.
nikki x

It's beautiful, Brenda! I love it. I had lilies and orchids in my bouquet, but not pink ones. they were rusty orange! Sounds a bit garish, but they were mixed with peach roses and looked pretty good with the jade green bridesmaid dresses

Stunning card Brenda ! I LOVE this ,, so pretty and delicate ,,beautiful :-)

ooh I love this lacey creation, great doilies with the hot pink and the cool medallion behind the image, too fun!

wow dear... this is simply gorgeous!! very chic and smart... and with my favourite color combo! =)
Hugs
Sadi

What a beautiful card and colours. I must say that lilies are near the top of my list of favourite flowers :o)
Jackie xx

Beautiful card Brenda. That lily is just gorgeous and the doileys and rosette are a lovely finishing touch.

This card is so beautiful Brenda, I love the stunning image. Lee x

Hi Terminator,
I love this card it is soooooo cute, I love the rosette and the colours as always you rock.
It would be great to see you on TV but I know what you mean about stress though, I was asked a couple of years ago to film a piece for a work conference , and the night before I couldn't sleep and when they put the camera in front of me for the first time ever I was speechless who'd thought lol
Hugs
Mandy

Gorgeous card Brenda! The pink & the white look stunning together!

Oh Brenda this is just so beautiful!! The lily looks fabulous and I love the way you have used the doilies!
Thanks for joining us at the Pretty Little Ribbon Shop challenge.

Superb with the rosette & your doily layering. That pink is a terrific match for the lily too - that colour just associates itself in my head with the lily that's so often included in bouquets.
Paula (PEP)

This is so pretty, love the pink and white colour combo and those hearts look lovely
Lindsay xx

Hi Brenda, just wanted to say thanks so much for stopping by my blog today. I love the pink and white combination on this card, and I like the doily on top of the rosette.

Wow, this is such a pretty card!

Love the colours of this card, it's so pretty.