Lady's Day at Ascot (my card - not the motley crew) 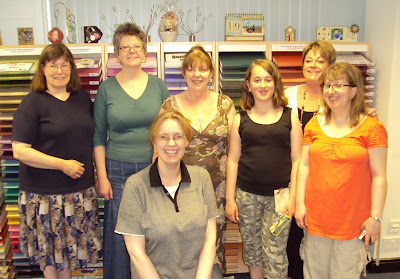 Good afternoon peeps, hope you all had a good weekend. Mine seems to have gone by all too quickly, but I did have a wonderful day Saturday at Sir Stampalot and above is a picture of myself with some of the girls who joined Chris and I for a day of crafting.......it might be fairer to say a bit of crafting, a lot of talking, some yummy food and a glass of French bubbles as well.........it had to be done.

Unfortunately some girls had left before the cameras came out, it would have been lovely to have everyone included, but another time and judging by the messages I have received it's likely to be repeated. I want to say a huge thanks to all of you, several of you travelled quite a distance to join us and it really was lovely to spend time with you all. 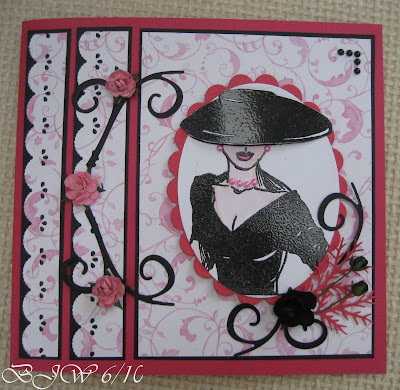 I also have two cards to share with you today. The first using a new stamp that just happened to fall my way at Stampalot at the weekend and when I saw the theme of "Summer" at Stamping for the Weekend I immediately though Ladies Day at Ascot, the highlight of the Summer race calendar which also fits Our Creative Corner which is "Summer Inspiration". I used the sketch from this weeks Secret Crafter plus it is also my entry for Daring Cardmakers, a new one for me, but when I saw on Lyda's blog that the theme was the birthstone for June of "Pearls", I had to enter as I am a June girl.

The image on this card is called Sophia which I stamped with versamark black and embossed with detail clear, added a little watercolour, decoupaged her hat and gave her a pearl necklace and earrings. The PD is Papermania punched with Martha Stewart embossed scallop, some Sizzix swirls and roses and leaves to embellish. My second card is for this weeks Penny Black challenge which would like to see "Swirls" and also Cupcake challenge which has the theme "Dazzle Us". The main image is Penny Black 4042K daisy fields inked with Tim Holtz barn door and Marvy pens and spritzed with water before stamping. The circle is cut through the Big Shot with a Marianne stencil and the swirls are from the same set. The gorgeous glittered sparkly DP is My Minds Eye, the flower is Magnolia, some pearls, punched leaves and butterflies and gems added to the thorax. The sentiment is from an unmounted set I won and have no idea of the make.
Posted by brenda at Monday, June 07, 2010

wow fab pic.. i was really jealous when i read all about your day. i don't have anyone to craft with , but it sounds like so much fun.
2 great cards. my favourite is the second as i love the olive green colour
Lisa ;)

Hi Brenda
such beauties, all of the 3 items posted!!!
great day I for 1 loved it.
hugs chris xx

I'm so glad you enjoyed Saturday too, Brenda, as we had a fantastic time thanks to all your hard work. I don't know how you've had the time or energy to make two cards since then, but they are both beautiful! xx

Oh Wow Brenda two stunning and beautiful cards, I love your lady and your flowers are fabulous. I can see you had a wonderful day by the look of the smiles on your faces. With love and hugs Shirleyxxxx

Great cards, love the floral image on the second one. Anesha

Glad you all had a great day!! Love both your cards. The first one is so sophisticated and stylish, and oozing gorgeousness!!!...and I love the pretty flowers and swirls of your 2nd one! Hugs Juls

You cards are allways so beautiful Brenda...I came to think of you when I sav the lady in the hat!!!The second one is so pretty with the cirkle, butterflies and flowers!!
Seems like you had a great crafting day at Sir Stampalot...If i only lived closer by....dreaming......

Have a great evening
Got the heads up from Janice today...py parcel is on the go!!!!! Ohhhiiii

Welcome to The Daring Cardmakers - now you've found us, I hope you'll show us lots more of your lovely crations

Just gorgeous cards Brenda and I love what you did with the hat-it looks almost real!!!
Glad to hear you had a good day and as I said to Sally earlier, I'm a bit green as I would love to come but I'm not good with driving long distances, particularly those involving the M25!!!
x

beautiful cards brenda I really love the second one I got quite excited when I realised I knew what you were talking about with the barn door and the spritzing :) Would def be up for another day nearer christmas maybe :) big cheesy grin

Hi Brenda, lovely cards as usual. I especially like the second one - colours are gorgeous. Thanks for a lovely day on Saturday, I really enjoyed it and hope we can do it again sometime. Linda x

I love the Sohpia stamp and have it myself but find I have trouble getting even ink coverage. Perhaps you could give me a tip on that one. You've made a gorgeous card with her - very elegant. Your second card is gorgeous - lovely stamped image and fab colours.
Beryl xx

I love them both Brenda and as they both have pearls you can have double points! So glad you joined in with us at DCM this week.

oh wow hun brilliant pictures,oh you looked as though you had so much fun,he he,and as for your cards,they are just stunning,as always,such detail and inspiration,have some candy on my blog hun if you would like to enter,hugs cheryl xxxxx

I really love both these creations, the designs and overall looks are striking.
Happy crafting
Tracy x

Both of these are lovely!
R/

I have just come across your blog and I have been enjoying looking through it for the last hour! Just loved reading about the French wedding and the different formalities over there. So very different to Aussie weddings and that is why it made such interesting reading. Everyone looked beautiful and happy!
Love your cards too - oh I know how I got here! I was searching for Sarah Kay stamps! I will become a follower now so I don't miss seeing more of your lovely creations!

Wow these cards are stunning, I haven't blog hopped you for ages, I will make more of an effort now!

Gorgeous, beautiful card Brenda, my fave has to be the ladies at ascot one.
luv
Debby

Hi Brenda, what a gorgeous card. Love the image and the colour scheme is stunning. Thanks for joining in with my "dazzling" challenge over at cupcake craft challenge this week. Hugs, Denise x

Two gorgeous cards but my fave has to be the first one with the stunning stamp, so elegant layout and colour scheme!
Hugs
Annika

Wow Brenda, what fabulous posts since I went away last week. It would take me too long to comment on all of them but every single make is gorgeous and I loved all the details of the Wedding. Thank you so much for sharing all that with us.

I wish I could have been on your workshop last Saturday with my blogging pals, Jules, Sally and Lynne. I can tell you all had such a fab time. Maybe next time!

Gorgeous cards Brenda! I was never entirely sure about the Marianne stencils, but I think you've just swayed me to add it to my crafty wish list!
And I enjoyed reading all about your French wedding, sounds like you all had a fab time!

two stunning cards I love the detail, thanks for joining us at penny black saturday

Thank you for your kind words regards Mitzi - she seems to be recovering well at the moment.

Looks like 'the motley crew' had a fab day.

Your cards are glorious as ever.

TFS the ipc Brenda...NICe...and I love your cards muchly... Your work is always beautiful...Thanks for all the great inspirations...HUGS and happy day wirh sunshine!

Oh how I wish I was there too.. n Im sure everyone enjoyed it...

Both cards are lovely, Ascot isnt too far away from me, I think it fits the bill perfectly..

Wow, two totally amazing cards. I LOVE both of them! Your Ladies' Day card is ultra sophisticated with the red and black and that wonderful image, which looks terrific embossed in black. Love the black flower too.

Your second card is just stunning too. The colors are fabulous and I love all the texture, embossing, stenciling - just everything.

Terrific job on the summer challenge. So happy you could have some fun with Our Creative Corner this week!

Thanks for joining us on SCSC :)

Beautiful cards!
Thanks for joining us at the SCSC!
Helen x

Gorgeous work, thanks for joining us at CCC.