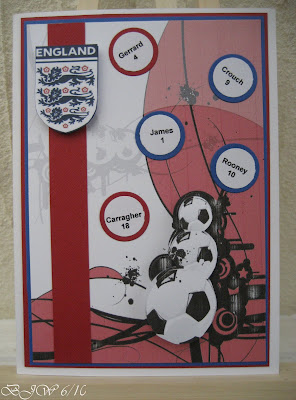 Well I eventually got my blog sorted, bit of a nightmare, but got there in the end and a new look as well.
No post since Monday and I've been a rather bad blogger this week as well, but I have been up to my ears in DT work, a new Polkadoodle CD is being released on Create and Craft TV on 27th June, Stamp Addicts have a new programme coming shortly and some exciting happenings at Sir Stampalot this Sunday as well:
They are having a very special Demo Day from 10am through 4pm when you will be able to meet Molly and George, a very special range of stamps. This will be the debut Summer collection with the artist herself, Clare Rowlands. You can read more here.
So a really quick post to share for this weeks Polkadoodle challenge where my teamie Dee has chosen the theme of a Male or Fathers Day card. Well I could not resist this one using the Just for Men CD although when I made it I did not know we would be playing our second match today. I decoupaged the footballs, printed out an England emblem, some computer generated players and squad numbers and finito.
Not sure about the goalie, but even if I had a direct line to Fabio, I would probably be none the wiser or know if Robert Green is going to get a second chance, I really do hope he does though. But our boy Stevie is there and wearing the armband with pride and with Carra and Johnson in as well it's a team I'm liking the look of, it's a long while since we had three Liverpool players in the England squad. There will certainly be some tense living rooms this evening evening.
Posted by brenda at Friday, June 18, 2010

Your "new look" blog is awesome. Love it to pieces.

Well done on being able to sort everything and get it working.

As regards the football .. .. well we just have to win or it isn't going to be worth watching for days and days!!!

Loving the new look, it is great to change the decor now and again LOL!

Lovely card too by the way, hope it brings them luck! Hope the boys win tonight as otherwise my kids will be sulking for days on end LOL!

A fab card. The match is on at 4am over here, so I doubt I will be up watching it live, but I do hope they win.
I love the new look - very elegant.

Hi Brenda,
I love your new look blog!
Your card is fab - very topical. I am avoiding the football as much as I can!
Have a great weekend.
Clare x

With you all the way! Come on England indeed. Latest gossip on the website is that David James may play in goal, we'll see!
Great fun card. The new blog look is lovely.

Love the new look blog Brenda very nice design. Very topical card and it's fabulous.
I'm looking forward to the match and hoping that the boys do us proud, I'm sure they will.
Enjoy the game.
xx

Love the new layout. Fab card - not rally a footie fan but you just can't escape it
Lisa ;)

love your new look,hun and as for your card,brilliant,i am such a footie fan,come on england,please,Germany are loosing at the moment,and just missed a penatly too he he opps,sorry any germany fans,hugs cheryl xxxxxxx

Hi dear
you sound to be very busy... The new look of your blog is really pretty: I love it!! :)
a big hug
sadia

Hi Brenda, A fantasic card, so clever, n waving the flag for England too. I had to make a footy card too, which I found difficult, cause I dont follow any football. So there will be no tension in my living room tonight.. But Im sure whoever recieves your card will just love it.

Hi Brenda,
What a pretty card! Very topical and clever! Love the layout and the colours!
Hugs,
Silvie from France

Hi Brenda
didnt now you were a footy fan, you even no all the names, I think I'm impressed!!!
Your card is great, pleased to see your getting into the spirit.
hugs chris xx

ps meant to say I am very impressed with your new face lift, if only it was that easy in real life.

Glad you got your blog sorted, love the new look, super footy card

You remembered the names of the players better than I would have done!! Great card Brenda.x

Really great card Brenda. Not one I'd do for Fathers Day either as it's only my nephews that are footie fans. Great inspiration for the next birthday I have to do too.
xx

Love the new look Blog, Brenda. Glad you got things sorted out.
Those new stamps look lovely and your cards have really shown them off to perfection.
I don't have a clue what the players names are but I know what I think of how they played-Mmmmm need we say more!!!!
Have a great weekend.
Hugs Lisax

Hi Brenda Totally fab footie card! Such a shame we are doing pants in the world cup At least your card is a winner! LOL xx

Great looking blog and great looking footie creation too. Glad you got your blog sorted, now I think someone needs to get Mr Blogger sorted out!!!!
Happy crafting
Tracy x

Hi Brenda!
Hope the England football team to be better than the French one!
And I like your cards. Hope to see you in August if I am able to come.
Nath, the crazy french maid of honour LOL

Hi,Brenda !
Tks for leaving a message in my blog ! Now it's my turn to visit you !
Hugs, Yone

This card is so cool im gonna have to copy it for the football males in my family ! melx