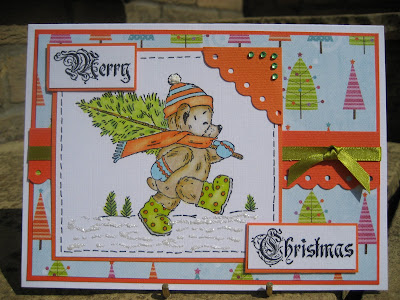 After a mare of a day crafting yesterday, today can only be an improvement. Yesterday was one of those days where everything I made went wrong.......like adding diamond glaze then standing my card upright......know what I mean ?......and so my day continued.....typical when I so desperately wanted to play with the new release Penny Black stamps and get samples made for Sir Stampalots Christmas Launch next weekend.

So this morning I buckled down and am making headway and have even made one that will fit nicely with this weeks Penny Black challenge where some form of stitching or faux stitching is required. I gave my sewing machine away to one of my son's girlfriends last year when my eyes reached the stage where I machined a finger.......decided it was an omen. So my 'stitching' was created by one of those little pink runners that make holes in your cardstock.......what they are called I have absolutely no idea and a confession it's not even mine.......sorry, keep forgetting to return it........then I joined up the dots with a black pen......who remembers those books where you could make pictures like that ?
My image is such a cute teddy Penny Black 4015K......I know I don't do cutsie often and even Janice was surprised when I chose this one, but I could already see his shiny boots in the snow.......such an example was the cause of the bodged diamond glaze yesterday. I've made several with him now and love him. I stamped him with versafine black, embossed with details clear and coloured with Promarkers. I also stamped his hat again to decoupage and add a fluffy bobble with Liquid Applique. The DP is one of the new Christmas range from My Minds Eye, they are all bright colours and make a lovely change from the traditional......mind you, number one critic - hubby - doesn't share my enthusiasm, he's very much a traditional when it comes to Christmas colours. Can't please them all.
The border strip and corners were cut with Fiskars threading water punch and the greeting is another new one from PB 3995F (cut in the middle to make two words) . I absolutely love this one, super script which lends itself to both modern and traditional. To finish I added 'snow' with JudiKins snow glitter, diamond glaze to his boots, ribbon and gems.
Posted by brenda at Saturday, August 22, 2009

Your card is gorgeous Brenda. This is a lovely image - he's a "proper" teddy bear! The sentiment is brilliant - so ornate and Christmassy. Fabulous layout too.
Clare x

What a lovely bright and cheery christmas card. That bear is so cute and I love your colouring on it. I love glazing the shoes and boots on my tildas but I usually lean on it or something like that and it ends up with a finger print in it Lol!
Happy crafting
Tracy x

This is a fresh, happy and lovely Christmas-card! I LOVE it!!

Great card Brenda, such lovely colourss and such a cute image
Pat xx

Love the colors you used. You did amazing on coloring the image too!

Hey, this is great, love the image and the snow looks wonderful! Well done! Hugs Nilla

Aww.. Brenda he is beautiful - I love him!

I think you have done a great job with this. Lovely to see new images - especially Penny Black ones!!!

And yes .. .. I remember the "dot to dot" books as a child. I also remember "magic painting books" where you sat with an egg cup full of water and a paint brush and painted images that had what must have been "dried paint" already applied. We always used to guess what colour each segment would be before we wet it. (The books always ended up a big crumpled mess once the water dried - but it was fun).

Oh yes I do remember the dot to dot and magic painting books. I just loved them.

What a cutie. Love the snow, papers and your corners.

Hi Brenda - love your Christmas card with the new release - rambling ted is just so cute isn't he?? And love the modern funky colorus - gives the card a real zing. Thanks for joining in this week's PBSC :-)
Pauline x

wow Brenda....super cute or what...love these new MME papers and your adorable ted...and yes I too remember those books...great stitching with your pink thingamybob.......thanks for joining in the fun this week at PBSC....hugs kath xxxxx

Oh I love it! I love these papers but am too scared to cut mine up - so strange! The stamp is adorable! Gorgeous stitching detail too! Thanks for joining in with the PB challenge this week!

Great job -- you have used such happy colors to make a delightful card.