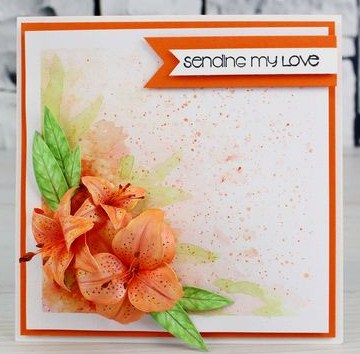 One of the cards Nancy had on the launch show of the fabulous new Floral Layers products. There is a clever spray called Terial Magic which changes the composition of fabric so it can be run through the printer, the beautiful flowers printed onto it which in turn can be cut with the coordinating dies. If you have not watched one of the shows then you really need to as this is something very different.

Good evening Peeps, it's a rather rushed post as I am a tad late with some of these samples and by the same token might be a bit early with others, truth is it's been a rather hectic week or two with the Tattered Lace 3rd Anniversary celebrations.

So it's going to be a few photos........and I've had to pinch a couple of those from TL as I didn't get as far as taking photos of some before they had to go off for the shows. Do you get the impression I'm losing the plot......you may well be right as I am still struggling with flu and it's knocked me for six as per usual and my head is anywhere but on my shoulders. 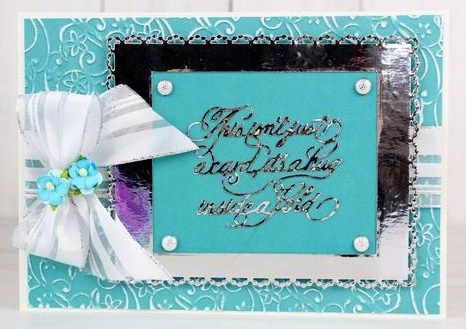 This one is for tonight's show when the new foiling system is being launched, aptly named ' The Midas Touch', the silver foil was laid onto one of the adhesive sheets and then cut with one of the pearl dot frames. The rest of the card is pretty straightforward. 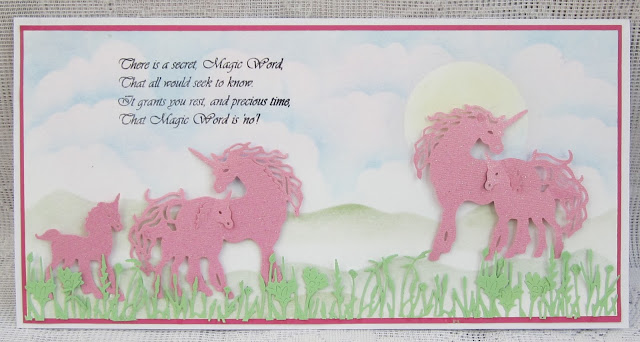 The Unicorns which are also making an appearance this week and of course a background of Pan Pastels. 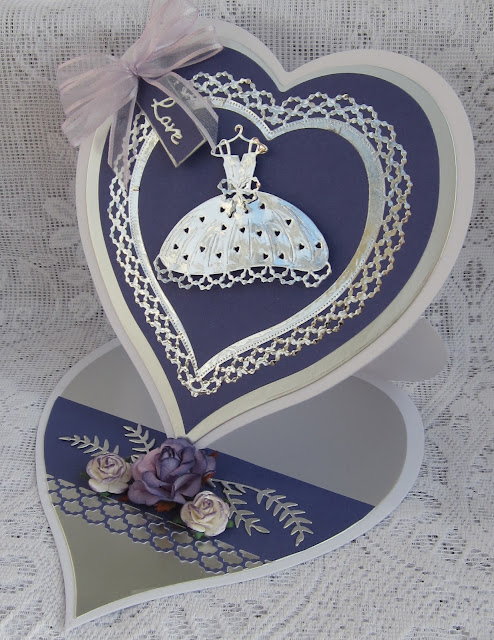 The silver foiling again on both the little die cut tress and the ornate pin dot heart, I did remember to photograph this one but it was a real pain getting a decent shot with the shine from the silver.


Many thanks for popping by and enjoy the rest of the week, I will be missing from blogland for a couple of days as I have a hot date with the NHS !

WOW those flowers are soooo beautiful Brenda and so sorry to hear you are not feeling your normal self!

Love the flowers, such a vibrant colour, cut unicrons and the easel is fab. Hope you feel better soon x

Love all the samples, but the first one is really outstanding!
Good luck with your 'hot date'

Those flowers look amazing, Brenda.
Your own cards look very pretty as well. I love how the pan pastel background creates just the perfect scene for your unicorns and your easel card is really elegant.
Sorry to hear you are having more health issues again. It must be hard to remain positive all the time if there never seems to be a quiet spell to catch your breath. It seems that Imhave missed a few posts. I will have a browse when things settle down at my end. DH was operated yesterday. He is doing fine, although his wound is causing much pain (he is not one to complain, so it must be really hurting). They wanted to keep him for one more night but he should be allowed to come home tomorrow.
Sending positive thoughts your way!
Marianne x

WOW! These are just gorgeous! I love how the flowers on the top came out and those unicorns are so cute. Hugs, Robin

Such beautiful cards Brenda. I like the sound of that spray, how interesting. I hope you date goes OK for you, sending you healing hugs to get over the flu too, poor you xx

An absolutely stunning collection of cards Brenda and all so different. I think the last is probably my favourite and I'm really impressed with your photography skills. So sorry to hear you have the dreaded flu and hope you'll be feeling much better soon. Barbxx

Sorry to hear you are still under the weather. These flu virus really like to hang around don't they? I do hope you feel better soon and everything else health wise gets sorted out.
Once again your cards are beautiful. I was able to watch a couple of the TL shows featuring the fabric spray - it was fascinating to watch and the flowers look so realistic.
Take care
Lesley

Such a gorgeous selection of cards Brenda.
Thank you so much for your kind wishes.
Take care, Sue xx

Beautiful cards Brenda!! The lily printed on cloth is awesome!! I have not heard of that spray!! But the result looks gorgeous!! The silver foil sheets are very beautiful!! Hope you feel better soon!!
-Berina
Moxie Craftie

evening Brenda - wow - and wow again - your samples are amazing! Sorry I've been missing - too poorly but getting there now! Hope things go well for you at the hospital. Big hugs rachel x

These are all wonderful Brenda but that first one really took my breath away with those beautiful flowers. I'm taken with those unicorns as well and they look fabulous against the pan pastel background.
So sorry to hear you're struggling with the 'flu and I hope things go okay with your date with the NHS. Take care xx

Beautiful selection of cards as usual Brenda all designed so lovingly but I must admit that the first one is WOW, that flower looks so real a stunning make.
hugs
lorraine x

the flowers are amazing and you have done such a fabulous job with all the samples, I'm not at all surprised you feel in a tizzy with having the flu as well. I hope you get on ok at the hospital and wish you well.
Lorraine

A fabulous selection of cards, I totally love the first one, great flowers and a fabulous choice of colours but if you really don't mind me saying, have no idea what the die sentiment says, no idea on the first line and I think the second line says - a card it's a hug and no idea what the last line says.
Hope your date goes well in the next couple of days

Wow, fantastic cards I especially like the first one the flower is stunning.

My goodness, Brenda. This post is a treaure trove of gorgeous cards. Impossible to pick a fave!

Each has a beauty of their own and lots of different looks.

Brenda, after all you have gone through the past several months, and now you have the flu? Nice people like you should not suffer so much. But your very deep appreciation for Life and Love is demonstrated beautifully in these incredible cards. (In all your artwork). Feel better soon, Miss B. Hugs, de

All so beautiful, Brenda! I've been under the weather for several days but trying to catch up on what I missed. Those little unicorns are precious!

Another great selection Brenda! I must say though photographs with silver and I do not get on! I find them so hard to do. I think you have done a grand job. Judy x

Gorgeous cards! And the flower on the first card is fabulous! Wishing you a good health & hope you feel better soon! :)

Love this gorgeous set of cards, beautiful everything, the colours and design....just fabulous.xx
{aNNie}

Oh Brenda what Amazing and beautiful cards, the unicorns will be very popular with the little ones.. I do hope you feel better soon take care
Hugs Babs x

Those flowers look so real! A beautiful and my favo card! The PanPastel scene looks great as ever and I love the dress on your last card! Hope you soon feel better and the flu is out the door for a long time... Hugs, Gerrina

Gorgeous! Those orange flowers and background are STUNNING! I'm in awe of this gorgeous inspiration, Brenda. Do hope you are feeling better these days too...

Great selection of cards and the first card definitely caught my eyes! The lilies look so reeeal! Sorry, to hear that you are under the!Do post some photos with your date if you have the opportunity - have fun!

Beautiful cards, the flowers are gorgeous (lilies I think) they look so real. I have seen a couple of the shows looks like a good buy if you like making flowers. Hope you are soon feeling much better.

The printed flowers are gorgeous! Must investigate... it would be awesome to make those for all sorts of décor projects.
Hope the NHS will take great care of you and return you to us promptly! xx

A gorgeous selection of cards Brenda. The flowers on the top one look beautiful.
Hope you are feeling better soon.
Lorraine x

Just beautiful Brenda! I love the lily card in particular, such awesome dimension. Take care sweetie, I hope you don't feel too bad after your date Karen xx

So sorry to hear you have the dreaded flu and hope you'll be feeling much better soon. GSD I have lost it behind.
Your works are stunning like always, but the first blow me away --- looks such realistic
CU hellerlittle

Beautiful heart shapes on this card ,It all blends so smoothly together jeni

Hope you're better soon--no fun to be sick! I'm in awe of the first card--just stunning! Wonderful work, as always, Brenda!

All amazing cards, but the first and last are really amazing! All so different and all beautiful makes Brenda, love them! Hope you're feeling a bit better after another sleep, Jx

Utterly amazing Brenda. I am intrigued about the spray which changes the composition of fabric, will have to look into that.

Wonderful selection and I see the dress features!

Fab creations Brenda, you inspire me so much regardless of your health problems, you've got to have some posititvity to get through! Take care, Ruby x

Great cards from you to see. Beautiful and elegant.
I like with the horses!! awesome.
Kind regards

I adore your orange card...and that lovely flowers look so realistic!

Such elegant card. Love the design and dies.

Fantastic selection! Those flowers on the first one look so real. Creative Blessings, Tracy x