All is calm in the treehouse - or is it ? 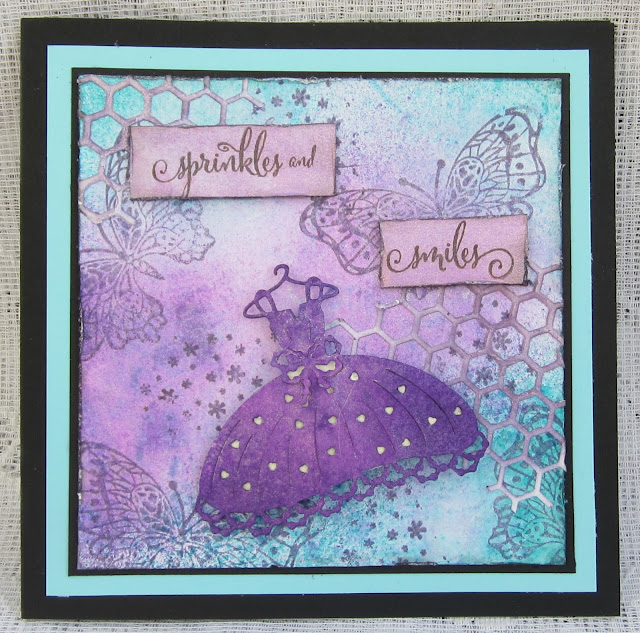 Morning Peeps, just popping in with a few Tattered Lace shares using some of the new dies and embossing folders coming up on Create and Craft TV this week.

Also got my Snippets Playground make for this week, last week was a bit riotous over there and Pancake Day was something else. But seems I didn't totally blot my copy book as Sarn has placed Viv and I in charge of the Treehouse for the week as Miss Di is have a break........clearly the events of last Tuesday gave her a bad fit of the vapours and Parsnip has not been sighted since eating his fifth brandy infused cherry pancake.

I am under strict orders not to go dishing out any hooch this week.............as if................for fear of any of the gang ending up legless.................whatever you heard about last Tuesday is nothing but vicious rumors and I promise you that Kath did make it home unaided. Mind you, nobody said a word about the odd bottle of Prosecco so I reckon it's fair game to keep some stashed under the bench. 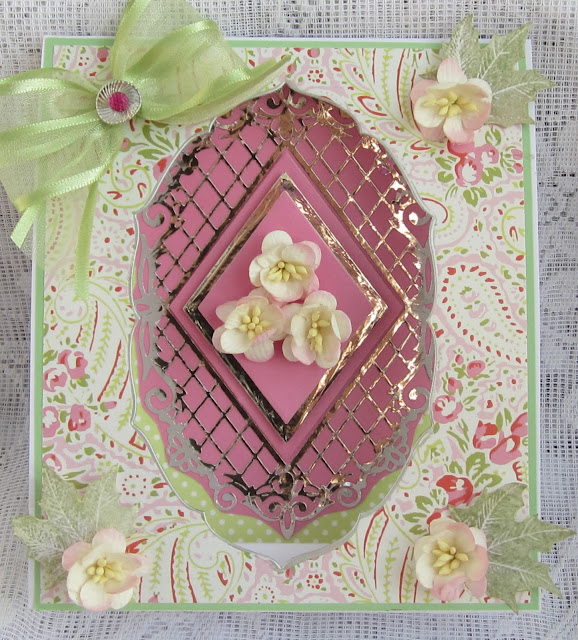 A short explanation on the cards, the one at the top has several Tattered Lace stamps used on the Dylusion background, the honeycomb pieces are ripped from a larger sheet cut with TH hexagon panel die, the dress is another new TL die being released this week and I placed it over a scrap of glitter card to give it some depth.

The pink and green card has a focal element using the new silver foil and adhesive sheets and TL diamond trellis die, you can see how intricate it is but it cut perfectly in one run through the e.bosser. 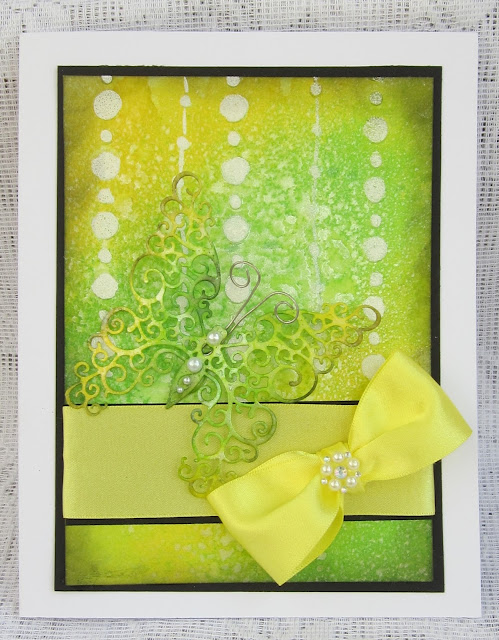 More dylusions on the above card, the spotty lines are one of the new border dies, I inked the folder with Versamark and embossed with detail clear before spraying the dylusions so I got a resist finish. The lovely Butterfly is another newish release from TL and some satin ribbon and a prearl embellie to finish. 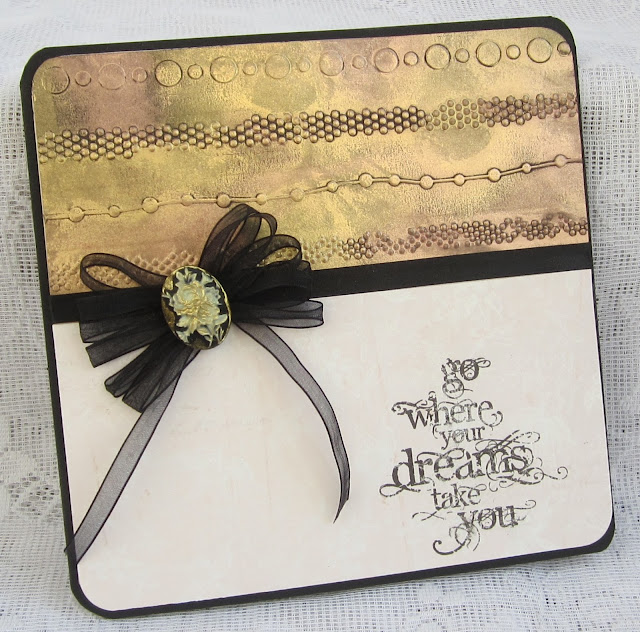 More of the border dies and lots of gilding wax, a Visible Image sentiment, ribbons and a cameo to which I also added gilding wax to carry the gold colours.

Have a good week all and as always many thanks for your kind visits and comments.

Gorgeous cards Brenda, you don't surprise us with just one but many and I love it...love the green card.xx{aNNie}

Gorgeous selection, loving the top one the best

Morning Brenda, lovely assortment of lush colours, fabulous use of dies,embossing folders and stencil work an absolutely beautiful selection of cards..
Hope you Have a good week
Hugs Babs x

A fabulous selection of cards! My favourite is the first one, just love the colours you've used. xx


My word, Brenda - all of these creations are
gorgeous.

These are all fabulous cards, but the first one is my favourite as I love the colours you've used.
Kath x

Beautiful selection of cards, I adore the dress one, have a similar stamp to the dress so may have to try this.

Gosh you have been busy. A lovely collection of cards and they are all so different. Barbxx

Some lovely cards Brenda, you have been busy
Jackie x

A fabulous collection of inspiration Brenda, the last one is my favourite though...so grown up, unlike the Playground antics of last week!! I must pay a visit, I've not been to play for ages!! xx

Wow, wow and, er WOWSERS . . . what a wonderful array of lusciousness there is to feast the eyes on in this post Brenda. I think I may have card envy! May have to visit the SNIPPETS PLAYGROUND tree house for some of that Prosecco later in the week. Right now, I'm stuck in the cubby hole doing paperwork! Miss Di left LOADS of it for me! Have fun in the lofty heights - don't worry, I'll be turning a blind eye to any shenanigans . . . unless Kath's other half makes a complaint of course!

All these cards are lovely but I have taken a liking to that top one. The floral design paper is gorgeous.
Did you menshun Prosecco? Which bench is it under cos I can't keep bending down to check which one it is!!
Hugs Mrs A.

Oh wow these are stunning as always! The first card looks magical! So creative! And love the gorgeous floral on the second!
Lucy x

Wow Brenda so many beautiful cards all so different but equally stunning..

Have a great monday!
Hugs
Sussie

Gorgeous cards, Brenda! Particularly like the top 2 & love the background paper used in the pink & green card.....well, I'm guessing it's a DP? Any idea what make it is?
Loving all your samples,

Ha, we never thought of getting into the sauce on our pancake day!
Wonderful cards!
Hope you're well!

OH my what dangerous pancakes... GORGEOUS cards as always Brenda, what a dose of inspiration!

Ormai riconosco i tuoi lavori dalle miniature in blogger.... Appena ho visto le meravigliose sfumature ho pensato "questa è di Brenda"... e sì... era la tua meravigliosa card :D
I recognize your enchanted makes seeing only the thumbnail in the blogger... I seen these wonderful tones of colours and I tought "this is from Brenda"... and yes :D it was your amazing card! LOVE so much the shaded purple and blue of the dreaming first card with the dress!!!
Great works also with the others cards, this in green is just fabulous and love the gilding wax on the cameo!

These are all gorgeous cards, B! The dies are so delicate and I must get out my stash of cuts that came in some very welcome happy mail last year. Eek! I'm sure the playground is in safe hands with you two! Grin
Hugs,
Em x

Wow all of your cards are gorgeous, love them all :) Have a great week, Shirleyxx

They are all beautiful Brenda but the top one is my favourite. I just love the colours that you've used, it looks so soft, dreamy and romantic, although I think it would be just perfect for a prom card. Wishing you a happy crafting week X

All totally gorgeous but if I was to pick a fave it would be the citrus lemon and lime creation. Hope all is well with you my friend.

Such an uplifting, beautiful assortment of cards, Brenda. It must have been enjoyable creating them so their magical beauty would not only flow from your finger tips, but into our hearts. I like the butterfly background especially, mixed with a dress - so feminine and girly. those border dies and techniques in your final card really touch my heart - especially with the sentiment! beautiful! hugs, de

Your blog post is so funny! This is such a fun group! Your cards are gorgeous! Well I tried to pick a favourite but it's impossible - I love them all! All so different!

What a wonderful assortment of cards Brenda, especially love the last two.

While Miss Di and Sarn are busy I think we should redecorate the treehouse... I'm sure there'll be a lot of volunteers especially as I heard someone mention a bottle or two of Prosecco xx

A delightful array of cards Brenda, lovely colour combos and spectacular designs. Sounds like you've had a fun week judging by your post, hope you continue to do so.
Lorraine

Amazing creations again Brenda, using these wonderful dies! And loving how your dylusions background turn out.

Gorgeous cards again Brenda, I love the third and fourth ones - must get out my dylusions again!!

You've obviously been kept in high spirits since last week and it doesn't seem to affect your crafty output! My favourite are the last 2, with the variegated gilding wax colours having the most pull, so beautiful, elegant CAS but striking all at the same time.
Have a great week, xx

You've been very busy, these are wonderful creations.

Totally stunning range of cards here, the colours are wonderful and some fabulous images and dies and I am going to mention the fabulous bows.
Was just wondering if by any chance last Tuesday I did my Elvis impression, the Doctor seems to think my back problem is muscular but my Sister (no she is not a Doctor) thinks it maybe my pelvis, so as I was in total agony last Wednesday morning, it was just thought.

A fabulous collection of cards Brenda but my favourite has to be the top one. Colours and background are stunning
Avril xx

Stunning array of cards Brenda, love the gilded one, the colours are so unusual, Cathy x

You keep leaving clues round blogland for me to find but I'm getting desperate. Which bench?
hugs Mrs AA.

These are all beautiful Brenda, too hard to pick a favourite. i love all your techniques.

Beautiful work, Brenda! I totally love the first one with the gorgeous background & the gilding wax looks amazing!

Such amazing backgrounds and such beautiful cards Brenda, another great collection, Jx
PS pens are here and I'll get the card on Fri, then all I need is the stamp...Rome wasn't built in a day was it!!!

Oh wauw all of these cards are so gorgeous Brenda!! You have made lovely backgrounds and used lovely dies too. If I had to choose a favourite it would be the last one, so very elegant! hugs, Marlies

More fabulous cards Brenda, you never cease to amaze me with your creativity, I'm not really a die cut fan but I adore that dress on the first card.

Each of these fabulous beauties took my breath away, as each scrolled into view. I'm gonna go out on a limb, though, and say #2 - awesome. I think it's the gleam of that gold! Loving each of these...terrific work, textures, designs & I love it! TFS

So many cards again! Love the purple dress and her super background! The resist on the butterflycard is gorgeos, just as all the gilding wax on your last! Maybe that one is my favo, or the first...seems I like them both equaly... Have a sunny day! Hugs, Gerrina

Just read about your robot today B....I managed to get 52 approx comments made and it's now bugging me....not only having to pick two flowers they have increased the pick the images.....give us a go hey..xx

Gorgeous cards as always Brenda, love the dress on the first.

Hi Brenda I am in awe of your creativity, the cards you make are always so beautiful and detailed, I wish I had just an ounce of your talent.
hugs
lorraine x

All are gorgeous cards but I am droolomg over the last one. The gilding wax has a beautiful effect here.

So many great card creations,wow! The yellow one with the beautiful butterfly catched my eye.The (last?) card creation with the special of gold and the border looks pretty much too.
Take care,hugs Sylvie