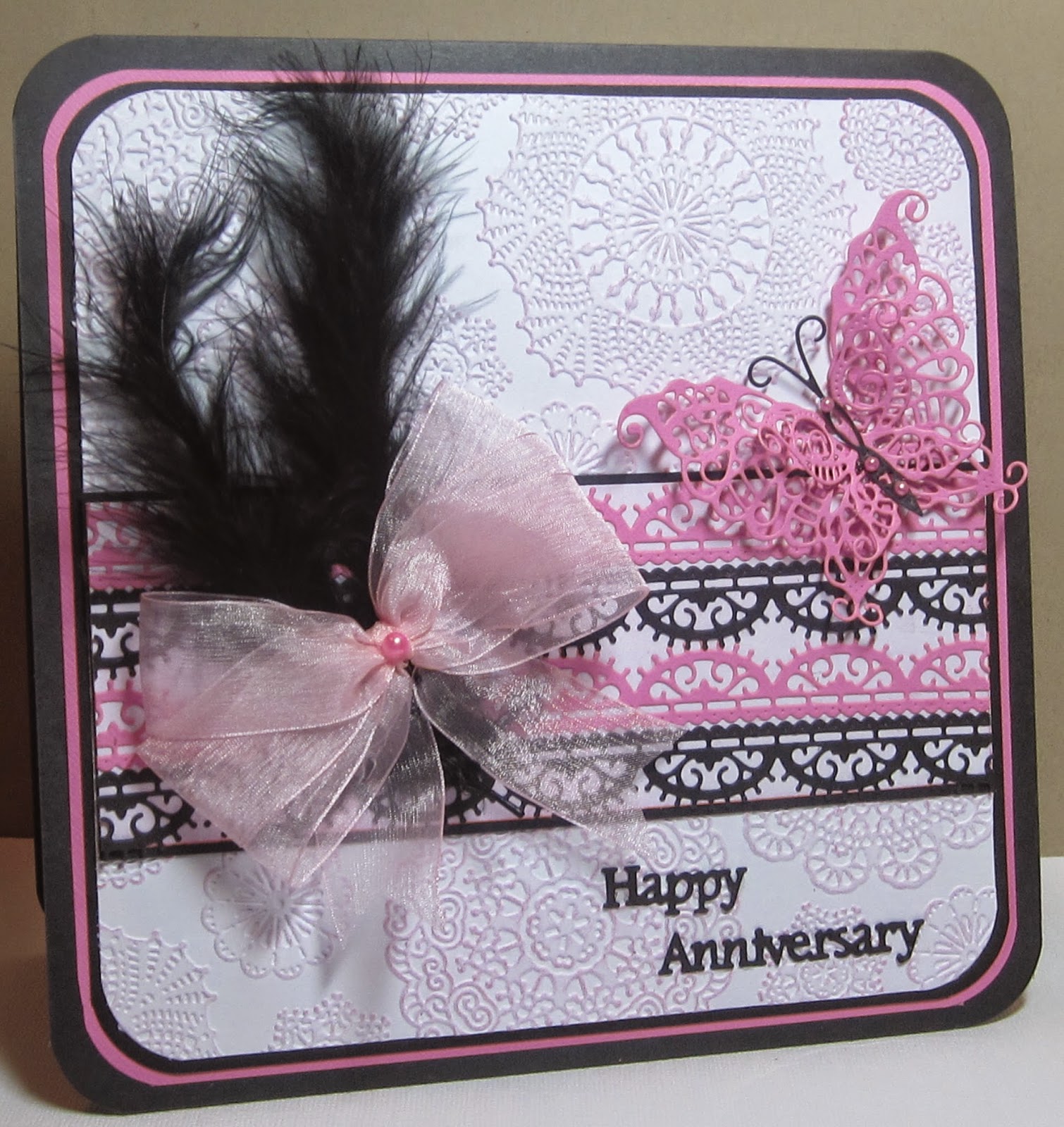 It's Saturday morning which means a new challenge at Allsorts and this week Tracy is challenging us to 'Anything but a Birthday'.

I promised earlier in the week that I would show some more of the Tattered Lace cards using the new Royal Lace collection which launched yesterday on Create and Craft TV to celebrate the 2nd Anniversary of Tattered Lace......................and goodness me, a whole week's worth sold out in record time. I used the large 190 square Lace Medallion embossing folder as the base of my card and after embossing dusted lightly with distress ink which really makes the pretty pattern pop. I cut six of the Royal Lace borders and  stuck to white card and placed across the embossed panel, then added a couple of black feathers, an organza bow, a TL Butterfly, some pearls and TL sentiment.

I thought I would also share this card with you and shock horror as it's another baby card, three in a month is a record for me as I usually avoid them like the plague, but I have to confess that since I went onto the Tattered Lace DT I have seen baby cards in a totally different light.

The sweet Little Monsters characters are adorable and although they have a cute element to them there is that touch of sophistication that Stephanie always manages to bring to her designs, I mean just look at those pretty ears ! Our youngest granddaughter absolutely adores elephants and has done since a toddler and has already put in her order for her Birthday card this year. I won't bore you with all the details of how I made my card as I wrote up the details earlier in the week here.

Gorgeous cards Brenda - I love feathers and always forget about mine - i'll have to hunt them out! have a great weekend hugs judith x

The TL embossing folder is so pretty especially when you dusted it with some distress ink - it really pops up! The addition of the butterflies, and feather with the black and pink theme reminded me so much of the Venetian carnival!
As for the baby card, have not seen an elephant with such intricate cutting on it and you've beautifully brought out all the details, Brenda!

Your Anniversary card is beautiful, those dies look fab and I love the way you have designed your card to work with the dies. Yes those baby dies do look quite sophisticated, and I love what your doing with them.
Gorgeous cards
Happy crafting
Tracy x

Beautiful, both of them and geat use of those fab dies!!

Two beautiful cards Brenda. The Tattered Lace dies are so pretty and the embossing folder you have used is gorgeous. I really like the little elephant on the baby card - he is so cute.
Have a lovely weekend.
Lesley

Goegeous make with the Tattered Lace dies. Those elephants are cute...

Two lovely cards Brenda. (Could do with 2 from the strikers as well! LOL) xx

{The Journey is the Start – my personal blog}

Both of these are adorable.

Gorgeous cards, the top one looks like actual lace vs embossing in the background, the lacy butterfly is so pretty. Love the baby card as well. Have a great weekend, Shirleyxx

Gorgeous Brenda!! Such a pretty little baby card, those elephants are darling! The anniversary card is so beautiful, wow! Love those feathers and that stunning layered butterfly, holy moses!! Breathtaking! hugs :)

The embossing folder used on the first card is beautiful!
Love the elephant ears!
Have a great weekend Brenda, hope you're well!

Wow Brenda that lacy EF is just gorgeous and the dies are so intricate, I really must treat myself. I'm not surprised to see another card featuring those adorable elephants they are too cute to hide away for long!! xx

Wow, these are gorgeous, Brenda!

Two fabulous cards Brenda and the cute elephant is so sweet.
Lorraine

Such gorgeous cards Brenda. The new dies really are so beautiful and your designed showcase them perfectly. I especially love those elephants.
Sue xx

I'm not surprised all the stock sold out, after they saw all your stunning designs & these are another pair of stunners too, luv Sam x

Lovely cards Brenda, the elephant is so cute with his 'fancy' ears

WoW Brenda, what a fantastic cards you made! I like the first one ... the colour a briljant and the lace are so cute :-))
Have a lovelly weekend :-))
Hugs, Andreja

WOW these are so beautiful Brenda, both are designed to perfection I especially love that first one.
hugs
lorraine x

Gorgeous colours on the first card and a little 50's style to me, too young to know really.
Love the elephant dies and the fancy bunting, my Niece is due a baby on the 10th of March and these dies would make a fab Baby card BUT apparently it is going to be a really big Baby so I wouldn't dare use the elephant incase she took it the wrong way, lol.

wow Brenda - these are stunning - my mum told me that everything sold out really quickly - I didn't even get chance to look! Love those elephants! Big Hugs rachel xx

Love both them. The second one is so cute, love the ears of the elephants, they are very pretty, and the buntings give movement to the card!
The first one is simply marvelous!! Love the matching borders on the embossed background, so much beautiful!!

Hi Brenda. Tattered Lace are fab aren't they? Thanks so much for stopping by my blog :) xx

Such beautiful cards Brenda.. Loving your choice of colors on each! I think my favorite of these cards is the first one, because I absolutely love the lace medallion embossing and the gorgeous butterfly.
Of course the elephant is just darling too, love his ears!!

AWE-SOME! Love these TL dies, and your hot colors really showed off the lace borders in such a stunning way. Brilliant to combine the colors with the design reversed as you have done it. The feathers & butterfly looked amazing against that fabulous lace embossing too. This one is definitely a show stopper. Can easily see why the new dies were sold out quickly. #2 is as darling as can be, with the sweet little peachy elephant and his lacey ears. Love that tiny eyelet banner border and the train of elephants trimming the bottom. Two super cards. TFS &Hugs

Wow this is stunning. Just love the design and details on this beauty. Thank you for your visit and sweet luv.
Hugs
Berni

Both lovely cards Brenda, but I especially love the baby one - very cute, Jx

A fun babycard and wow what a beautiful and extreem elegant first card! Hope your weekend was a good one! Hugs, Gerrina

two stunning creations, Brenda! I love them both! I LOVE the elephant! Such a fabulous die!

wow! the embossing folder on that first one is so detailed, I love it and the card you made.
Lynn x

Two beauties, Brenda - love them both :)

These both just make me say awwww.... Love the use of feathers in that first card and that doily butterfly is genius! But that elephant... that ellie just makes me grin and want to hold something baby-like, pronto!

I love both of your cards. The elephant is adorable.