Pick of the Bunch 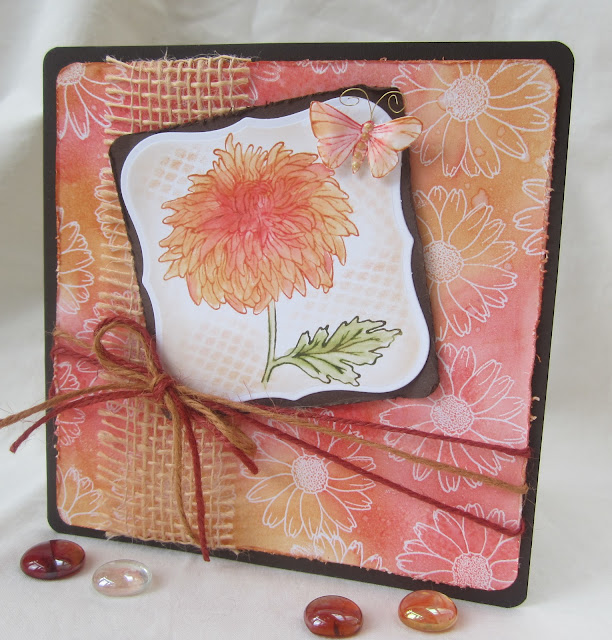 Background and main image form Pick of the Bunch Crysanthemum stamp sheet, butterfly from the Rudbeckia set
Saturday morning means it must be time for a new challenge at Allsorts and the lovely Nicola has a bit of a recipe for us this week '3 flowers, 2 stamps and one DP'.
Now I know I have been a dreadful blogger this week, time has really got the better of me, but I have been deep in craft mode with a magazine article which needed to be off my desk this week.................I'm told I also have something in the new edition of Papercraft Inspirations, but not checked that out as yet............then samples for Stamp Addicts C&C programme next week and Tonic Studios programme tomorrow with Ruth's stamps........you can also see the stamps and top card at Tonic Studios website here, more about them and some shares in a moment. Then there's the huuuuuuge pull of the Olympics, have they been great so far or what ? So apologies if I've not got round to you this week, but I promise I am going to try and rectify that in the coming days. 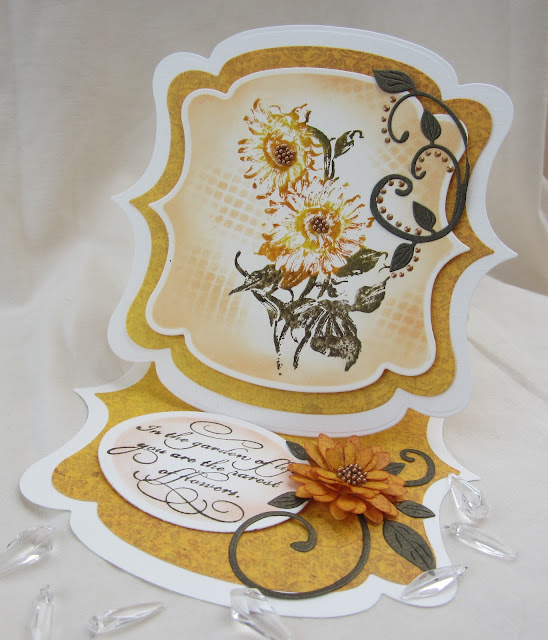 For my Allsorts DT piece, the easel card above, I have gone for a Penny Black sunfolwer stamp which I inked with distress markers and spritzed with water before stamping onto a piece of Fabriano watercolour card. I inked the edges whilst the piece was still in the die and also inked through some sequin waste to add a bit of interest. The DP is BoBunny, the sentiment another Penny Black stamp, the swirl is Cheery Lynn and the flower made with punches.
Next it's time to share some of the cards I have been making using Ruth's (A Passion for Stamps) wonderful new stamp sets, there are six of them distributed by Tonic Studios and they are called 'Pick of the Bunch', the first four sets Rose, Fuchsia, Lilies and Peony premiered on Create and Craft a couple of weeks ago and tomorrow at 5pm (Tonic Studios show) the Rudbeckia and Chrysanthemum sets will be released. 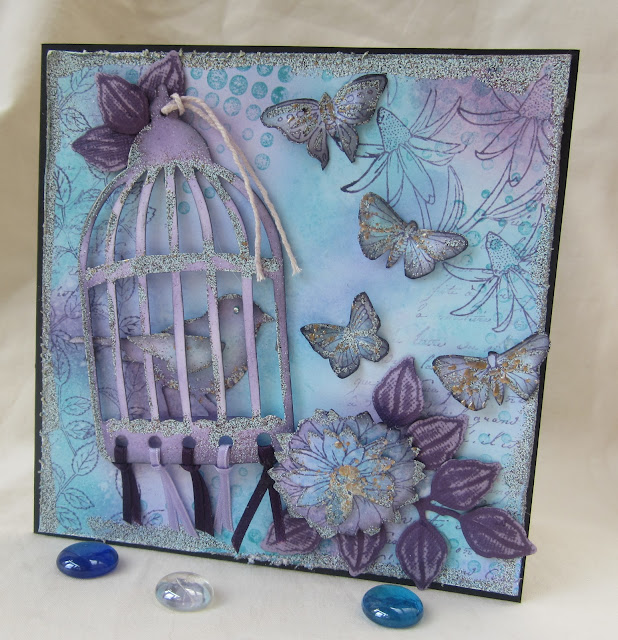 Background has images from the Rudbeckia and Rose set, flower from Crysanthemum set, butterflies from the Peony, Rudbeckia and Fuschia
I believe they were pretty much a sell out last time round, but I can tell you that I spoke with Colemans Craft Warehouse this week and they are going to stock them along with the matching dies also designed by Ruth that are due out very shortly, will tell you a bit more about that in due course as it might be a week or so before they arrive in store, so meantime you can get them right away from C & C. 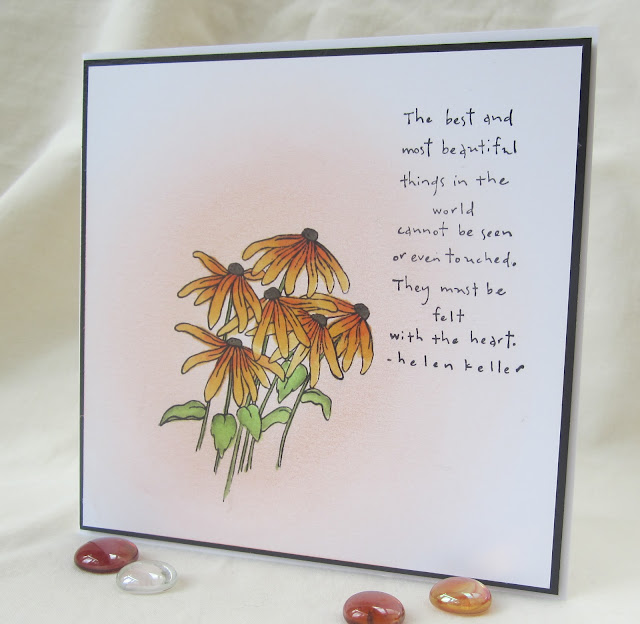 A simple approach using the Rudbeckia set
I have lots more samples in the pipeline.................well you know me and flowers and butterflies and I will be sharing some more with you next week.
Have a lovely weekend and thanks as always for dropping in.

oh hun what can i say these are all just stunning adore those flowers,and oh love that bird cage has to be my favourite but then it would be hehe,the colours are simply stunning,and the detail on all of them is just sheer class,hugs Cherylxxxxxx

OMW they are all so gorgeous and I will be tuning in too hun..:o)

What an absolutely stunning set of cards, they are all so beautiful :o)
Jackie xx

These samples are fabulous Brenda lots if colours and lively textures

Oh Brenda, I soooo admire your work.. Your cards are always stunning.
I especially love the easle card at the top.. The colours are wonderful with an amazing layout.. I love sunflowers too..

I have no words for it Brenda what a stunning work.Such a beautiful cards all of them. Love it. So different and so very beautiful.
have a nice weekend and my lovely greet
Marja

Have a great weekend

What a bunch of great cards! And all flowers; you really let the sun come in! Love the backgrounds on the first three cards, but the last card is one that inspires me to mabey work a little different next time... Have a good weekend! Hugs, Gerrina

This post took so long to read as I got side tracked to Ruth's blog and then Tonic Studios!The stamps are lovely and the cards you have made with them are beautiful. I love the Penny Black sunflower one too.
Looks like I'll be having a go at something similar soon - Tim Holtz Compendium arrived yesterday and a set of Distress Markers arrived a few minutes ago. Woo hoo - I'm gonna have a play today.
Beryl xx

Absolutely beautiful & no apologies at all needed - you give much with your blog & the encouragement through seeing your samples. The last is a real treat with the Rudbeckia & so effective with your gentle shading & the black matting. The first is my other favourite (but it's hard to choose from these) - the background & the lovely graduated Chrysanthemum shading is gorgeously acented with the tied fibres & I love the way the mesh is picked up by your sponged patterning background for the flower.
Take care
Paula (PEP)

These are all gorgeous Brenda, I love the colours and textures on the first one and the third one with the butterflies is absolutely stunning, I hope you are well
Lindsay xx

WOW!! All of your cards are stunning Brenda. I adore floral cards and yours are always so beautifully design, thanks for sharing

I hope you have a fab weekend
Hugs Sue

Wowzers Brenda, you have been creating! Love them all but the first one's my absolute favourite. You know, my kinda colour, and I love the way the paper matches the flower. Hugs, Frea

wow some fabulous cards Brenda .. i love that top one - the colours are fabulous -
Lisa x

I love 'em all but mmm think the last two are just the best ;0) xx

My word you have been a busy bee Brenda. These are all beautiful cards, so stunning. Lee x

Absolutely beautiful & stunning cards Brenda, I particularly love the orange one & blue one & the Helen Keller quote, your blog is an inspiration to view & read.
Much love
Jane xx

Gorgeous cards, Brenda - I love them all :) Elizabeth x

Wow, these are beautifl. I love all the flowers and especially the butterflies.

Wow Brenda, inspiration is just flooding over with all these beautiful cards. I am really loving these stamps - well done to Ruth for asking you to do some samples for her - she will not be disappointed with these! I too am loving the Olympics, catching bits here and there. We Brits now how to put a show on don't we!
Have a lovely weekend,
Jo xx

All stunning as always Brenda.
Love the colours of the first one and the flutterbys are beautiful.
Enjoy the weekend.
Take care
Debs xx

Your work is always an endless source of inspiration! Have a beautiful day!

The easel card is my personal favourite but they are all lovely! I have never made an easel card and always drool over the intricacy of one.

Stunning cards Brenda. I love the colours in the first one and the third one, the lovely shape of the second one and the simplicity of the last one. In fact I love them all! These new stamps look really yummy. Must go and record that programme.

Thank you so much for my prize for the poppy card. You're very generous. I love these gorgeous papers and beautiful satin ribbons.

Have a lovely weekend,

Wow Brenda an amazing selection of cards each and everyone of them are so beautiful and so very different, I love the images, colours and designs superb work.
hugs
Lorraine x

Wow, Brenda! All totally stunning! I love them all. currently wading through piles of washing. Will be in touch soon x

How beautiful! Yup, have to say that the Olympics are a big draw away from the crafty studio! Good thing they only happen every 2 or 4 years.
R/

Some real beauties here! Good luck with all your commitments!

floral-riffic cards Brenda, I adore how realistic you make them look, so much depth!

Wowee Brenda you have been busy! These are all AMAZING - as always! I love the warm colours and butterflies on the first, the layout and lovely sentiment on the second, the ethereal fairylike colours and shimmers on the third (that one's my favourite! Purple is the best!) and the CAS style of the last is so elegant - that sentiment is also very inspiring :) Your talent never fails to amaze me!

Oh wow...you are just pumping out the most amazing cards Brenda. Love all of these.