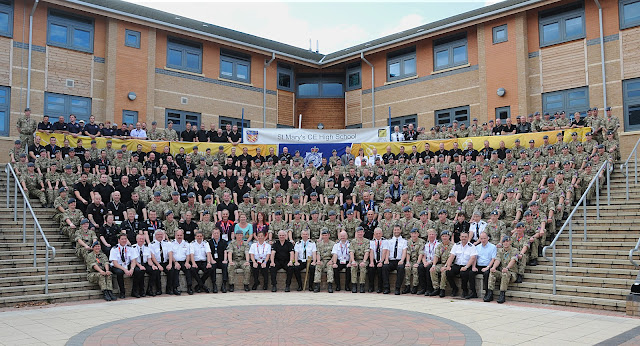 Here is our eldest, front row centre stage with his colleagues and army support staff who he says have been magnificent throughout, all part of the Olympic security personnel. Note: don't be fooled by the dignified look and grey hair (family trait), he's much, much younger than he looks and very senior for his age.
Good afternoon peeps, I have some rather special photos to share with you today which make me a very, very proud Mum.
As lots of you know our eldest son is a Chief Superintendent in the Police Force. He has been involved in the Olympics right from the torch procession through to the security elements of the Games themselves and although he is not in the Met, has been based in London the last few weeks.
Our youngest is also involved in a different way after putting his name forward as a volunteer and was assigned to the Tai Quan Do event........the fact he was the UK junior champion when he was at Nottingham Uni probably helped a good deal and that event kicks off today. Not sure if he will let me share a photo, will have to wait on that, he can be a tad shy at times.
Our eldest is pretty modest as well, given the huge responsibilities on his shoulders, but he has given me his blessing to share the ones in this post. 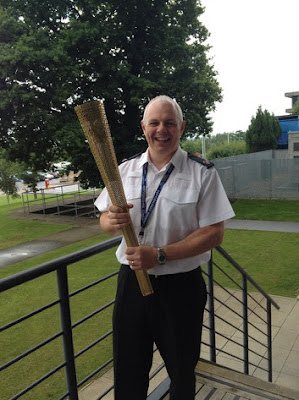 This one was before the Games when he took over command of the torch, I so wanted to share earlier but had to wait for the OK, you know security and all that. He looks just like his Dad here. 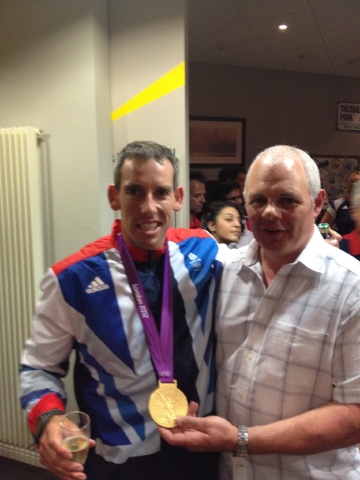 Here he is at one of the receptions for the Olympic rowing team, he said all of the athletes are fabulous guys and openly expressed how totally overwhelmed they are by the warmth and support shown by everyone, from Police, security staff, officials and volunteers right through to the loyal public attending the events in their thousands. He said they were happily inviting guests at the event to join in photo shoots with them. 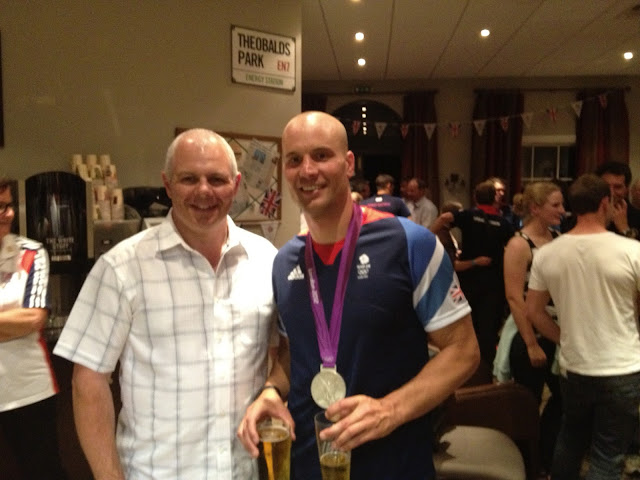 And finally, back to the torch procession (I think). 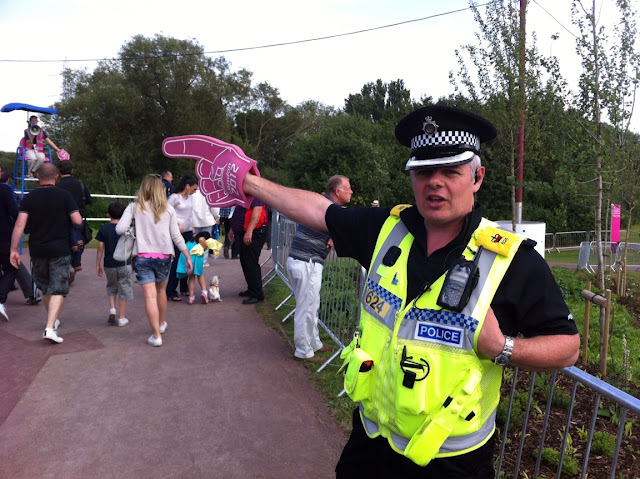 He said he thinks he needs to see a doctor about that swollen hand !

Wow Brenda.. Those are fab photos...
You must be so so proud of your boys..

Ohhhh that swollen hand looks.......hilarious, teehee. Wow, you and your hubby must be extremely proud Brenda. These are fabulous photos. Lee x

What fantastic photo's Brenda, definitely sons to be proud of. I have been watching the Men's Triathlon this morning gosh what stamina they have makes me out of breath just watching them. Have a good day.

It's only right that you are a proud mum xx

And so you should, such a lovely feeling when they do us proud, Brenda, Lovely piccies. Carolxx

Wow, what a fabby memento and how proud you must be, Luv Sam x

I accidently hit next blog at the top of my blog and it brought me to your blog. Very nice blog.... now I am headed to check out some of your tutorials.

Amazing photos Brenda you must be so proud!

Fantastic pictures and such precious memories to keep. I'm not surprised you are very proud.
Denise xx

fantastic pictures, I'm sure you're proud =)

Fabuolous photos Brenda ! and what memories they will have :)
Von ♥

Great photos, bet you are a proud mum.

You & your husband must be very proud indeed - Congratulations. How delightful that you were able to share the photos too.
Paula (PEP)

Congratulations and how proud you must be of the family!! Great photos.

oh wow these are fabulous pics.. i don't blame you for being so proud .. and what a fabulous job they have done
Lisa x

Oh wow, you must be so, so proud of your children being involved in the Olympics in such a big way, well done to them x

What great pictures. Thanks for sharing.

Thanks for sharing these great photos with us Brenda

Fab photos Brenda you are rightly very proud. Great to see these. I loved seeing the torch relay and today we have just got back from a day at the Olympic Park...what a day. As your son says the atmosphere is just so positive. I am so proud to be British.Please thank your son for helping to keep us all safe and sound too, they do an amazing job.
Jane x

Thanks for showing us your super photos Brenda. What a nice looking young man you have! How proud you and your husband must be and rightly so. Michelle x

Great pics Brenda. Sounds like both of your sons are doing a good job. Thanks for sharing your photos.

wow - what fab pics Brenda - you must be so proud. They would look good on a layout....
Lynn x

What fantastic pictures Brenda and you have every right to be proud of your children - they look and sound (the shy one) a credit to you Mrs!
Fab cards still on here too - I will be back to normal commenting soon!
Hugs Laurie xx

Wonderful photo's Brenda You must be so proud of both of your boys and rightly so, it is nice to see some of those working so hard to make it such a success for everyone.
Kevin xx

What a proud moma you should be! Great pictures my friend!

You Must be so proud Brenda of your son's..What fabulous pics.. I feel a scrapbook layout coming on..I am so glad you got permission too share these with us.. A wee message for your two wonderful son's from me.. You do a fantastic job you both are sooooo appreciated for the everything you both do in the workplace I also am so proud of you both Hugs May x x x

How wonderful for your son to have been involved in this historic event and you certainly have a lot to be proud of with both your son's being involved. Thank you for sharing these great photos.
Beryl xx

What a wonderful tribute to the Olympics. We are also keenly following the Olympics here in South Africa.
Hop on over to Doing Life - for a chance to win some lovely digi stamps to value of 20$.
Hugs
Desíre
Doing Life
Digistamps4Joy DT Member
Tammy’s Scrapin Corner DT Member

Great memories from an Olympic event!

Wonderful photos Brenda, and Congratulations to your boys on their involvement. I said when the torch came to Nottingham that it was lovely to see the police getting cheers as well as the torch bearers x

Hi Brenda you are so right to feel proud. Thank you for sharing the fabulous photos with us.Well done your boys!! xx

Love the photos Brenda, how lucky they were to be involved and what great keepsakes these will make. My hubby was grey at 19 lol but like your son still looks very young with it.

Great photos Brenda - you must be so proud of your children :)

Don't know how I got here from WOYWW but I did and so glad to see this post. How lovely to read all of this and see the photos.
Thanks for sharing - Hugs, Neet xx #36

You must be soooo proud of your sons, Brenda! So happy that they got to involve in such an important event! My DH was already greying at the age of 35 but still young at heart! TFS!

What a terrific experience for you son . Two sons to be very proud of. So glad they both let your share the photos it is nice to see up and close to the background of the Olympics.