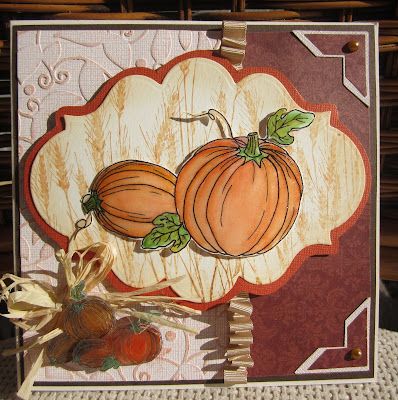 Nature never fails to amaze me, here we are into October, leaves are changing colour by the day, yet my roses continue to flourish as though it were June. In fact the floribunda in the picture below...........and that's only part of the bush.......was a present on my birthday last year, so has has only been in a year, yet has flowered constantly like a mature bush since May. 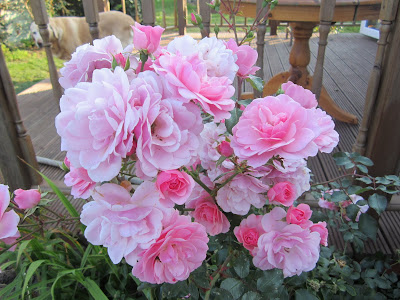 Note a lab lurking in the background
My Autumn card up top is using Ruth's new pumpkin image at A Passion for Stamps which I have coloured with Aquamarkers and covered with Glossy Accents, although that's not to clear in my picture. The corn on the nestie mat is Hero Arts S5316 Silhouette Grass. And the embossed panel is coredinations and new Sizzix folder, sanded down to reveal the core colour.
I also had a little play to see if it was possible to print digi images onto shrink plastic and it seems it is. I had been wondering about it for ages, but despite reading through the packaging on every make in the shop at Stampalot, none suggest it's an option. So I decided the worse case scenario was I wasted a sheet of shrinky. It would not feed through my printer at first as it was too slippery, so I sanded the leading edge both sides and it went through a treat. I blotted the images a couple of times to get rid of the excess ink, then coloured with Aquamarkers and shrunk it down to gets some tiny pumpkins. 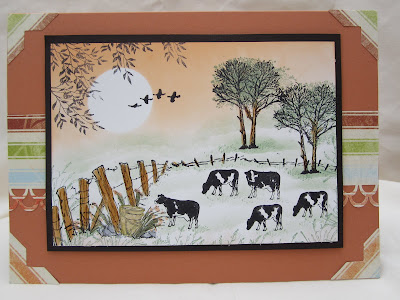 And this one a bit more playing with the Speedball brayer, Adirondack dye inks and as assortment of Art Impression stamps. The fence against the cows is a a bit out of context size wise, but hey ho, it's all fantasy.

PS* I have some candy up for grabs at Creations LaDiva :) Hope to see you there !

Stunning roses! long may they continue flowering. The cards aren't bad either, lol!

Hi just catching up on your posts so many tips and amazing projects love them all so inspired just need more time !! Kitty :D

I love the colours on the pumpkin card :)

loved the pumpkin card such lovely colors and fab image!!!

gorgeous cards Brenda!
and oH mY wOrD your roses are stunning, can only image how beautiful they are IRL!!!
take care
hugs

card with pumpkin is wonderful

Beautiful cards and flowers.
I had a red strawberry at the cottage garden plot;-))m

2 fab cards! Love how you did the shrink plastic pumpkins. Will have to give that a try. I bought the kids a pack on shrink plastic the other week so will have to pinch some from them.
Your roses are gorgeous too!
Lora x

These are gorgeous rich colours and I might just have to try shrink plastic now...
Love your roses too! Ruth x

What a beautiful card. Nice colors.

Two beauties, Brenda! I am sure I have seen some shrink plastic specifically for printing on at a show. If I see some more I will get you some x

Beautiful cards. I follow your blog because its fantastic. Kisses!!

Thanks for your lovely visit over my way Brenda. Your first card is so terrific with all the different layers. I must dig out my shrink plastic ang give it a try. Do you know I didn't notice the size comparison with the cows and fence until you mentioned it. :-) I just saw a lovely scene.

We're having a right old mix of weather aren't we, some of my shrubs are still flowering and some are changing to there lovely rich Autumn colors.

I love, love, love the way you have stamped the corn as a background to the pumpkins. The shrinky pumpkins are a fab idea and clever you for working out how to get it through your printer.

I adore your scene and the colours are so lovely.

Oh my word, your roses are absolutely stunning Brenda. Wow, cant believe how well they are doing for this time of year. Your cards are so beautiful as always. You make brayering look so easy but it is an incredible skill to have. Not sure I would ever get the hang of it. Lee x

Your roses are amazing & I had to chuckle at the "lurking" canine. I do like that second card & your idea of fantasy land - Lilliput springs to mind. The corn background of the first card is so effective & I love the shape of that matting panel. As for your shrink plastic adventures - ingenious.
Paula (PEP)

Love that background stamp to your pumpkin, off to look it up. I wonder if I could get shrink plastic through my printer? Always wondered, but scared to try...hey if you could do it...Your rose is incredible! I've got some still blooming but not that profusely! Amazing, you've obviously got a green thumb and not from ink!
R/

Great! that was lovely..

Magnifique cards!I love all natural colores and details! And flowers are beautiful!

Beautiful cards, really love the pumpkin one. The roses are amazing too. I was in Cambridge and Yeovil last week and the weather was amazing!

Stunning! the cards and the flowers!
Blessings Bernie

That Rose is amazing Brenda - so beautiful. I love a bit of fantasy - your cows are brill! Cheers Claire x

Love your beautiful roses, Brenda - ours have definitely stopped blooming now but we did have some late blooms which were lovely. Your cards are gorgeous, as usual, and that is a great tip for putting shrink plast through the printer - must try it out some time. Is there such a thing as miniature cows, like you get miniature horses and goats - if so, your fence could well be in proportion ... more fantasy, perhaps :) Elizabeth x

Gorgeous cards Brenda! That top one takes my breath away. Love the shrink plastic pumpkins - you are a genius :)

I love those pumpkins!