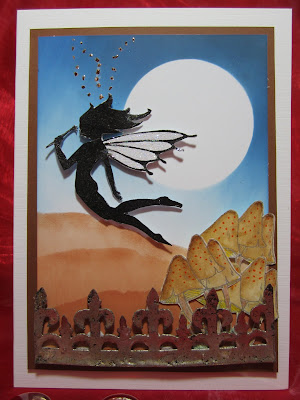 Good Monring peeps, a really quick share of some brayering I did the other day.
No sooner had I mentioned toadstools to my friend Ruth of A Passion for Stamps, than the image was making it's way to my computer. I did a couple with them last week, but wanted to try one with a fairy........the two sort of go together in my fantasy world.
So I brayered a background with Adirondack dye inks........the colours do look a bit intense in the picture, but are not that bad in the flesh. I stamped and heat embossed a fairy, cut her out and glittered her wings then mounted her in the sky. I printed out the toadstools three times, coloured with Aquamrkers and placed behind a fence cut out with a TH die and embossed with some yummy new Frantage embossing powder from Stampandous............it's a sort of a cross between normal powder and UTEE. 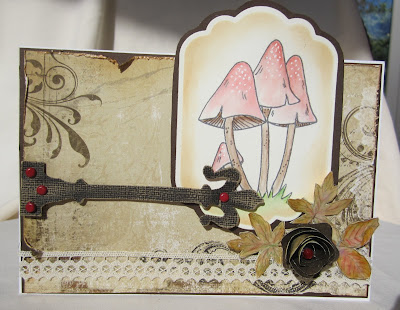 My second share is using the same toadstools, but printed out larger, again coloured with Aquamarkers, some Bo Bunny DP, a TH hinge and a Marianne die rose. The leaves are also Ruth's images, coloured with the same medium and covered with Glossy Accents.
Thanks for dropping by and hope you have a good day.

ooh i love the toadstools .. i agree they are so magical..
Lisa x

beautifully misterious, the first one!
i love the mushrooms! bravissima!

oh just love these hun,love the fairy and just adore that toodstool,love them hugs cherylxx

Brenda these are gorgeous. The first one is so magical and beautiful, also the background. The second is very elegant and beautiful.
lovely greet Marja

Glad you liked the toadstools - and I love what you've created with them! Your fantasy card with the brayering is so imaginative and I see you've managed to incorporate two of my other images (Beech nut and Maple Leaf) into the 2nd one!! Thanks! Ruth x

this is awesome! that's something I have yet to try, is using a brayer.

Two lovely cards Brenda and I just love the toadstools too....

Awsome cards, really like the one with the fairy!!!
Paula

Brenda these are incredible. I really love visiting your blog. You do amazing work. These are works of art. Lee xx

how gorgeous Brenda, I love them both x

Lovely cards Brenda. Really must try brayering but only so much time available.
Mags
x

Hi Brenda, I love the shape of all fungi and the colouring, and your cards are stunning, love the nympth to. hugs Shirleyxxxxxxx

Gorgeous card Brenda, I love what you do with inks x

These are lovely cards! I need to post some I've done with the circle mask. It always amazes me how easy they are, yete they look so complicated!

Like both cards Brenda! Looks like fun if I could spent a little time in your fantasyworld! Greetz, Gerrina

Love these magical makes Brenda, that fair is amazing, and love the toadstools!!!

Hi Brenda, I tried to comment on this post the other day but blogger wouldn't let me..ggrrr.
Love both cards! The top one has to be my favourite I think, love the brayering and that fairy looks stunning.
Lora x

gorgeous cards! luv the brayering and the toadstools :)

Wow the second card fits me perfect, Love it :O)

These are both gorgeous - I love the colours you've achieved. I've really got to try brayering some time :)

Amazing! Love the what you've done with these two cards! x

These are just beautiful!

What a lovely set of cards and great brayering. Its been ages since I got my brayer out. Must play tomorrow! My blog/little craft business is called Toadstool Curio as I love toadstools. I love the image you have used. Where is it from?

How utterly different those toadstools look in your two cards. The dimension of that embossing powder on the fencing in the first card is incredible & i love the ruggedness of it against the smooth black silhoutte of your fairy. The brayered hills & sky look very effective. With the second it feels far more non fantasy world - it could be a woodland scenario with that bracket reminding me of a gate or iron railings. all very suggestive of the rugged outside of the outdoors.
Paula (PEP)

Oh you have used these images to perfection......great cards and lovely colouring.

Oooo the first one is MAGICAL! I Love them both but I really love how you placed the fairy on that fabulous background!
Blessings Bernie