Hues of green and purple 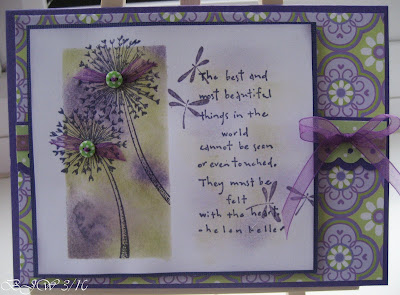 Good Aftrenoon peeps, hope everyone is having a good day. Not a lot of sunshine today, rather dull but at least not as cold. Could Spring be here ? My hubby was reading something on the tinernet this morning which said most spring bulbs and flowers were four weeks behind this time last year. Judging by those in our gardens that sounds about right, most are very reluctant still.

I have a cold - woke up with the sneezes and by mid morning it was in full swing, guess I am in the fashion as lots of peeps have them. It's my bloggaversary at the end of the month and was planning getting some candy thank yous up today, but not that organised so hope to get it up here later this week.
So, just one quick card, don't really feel in the mood with this cold and it's for Everybody Art Challenges which this week has a recipe "Two flowers, two DP's and two buttons".
Good old Penny Black 4040K Sparklers again.........can see this one becoming a real favourite.........could it be anything to do with the fact it's not unlike Stampendous P107 I wonder ? And the card is a similar take on one I did at the weekend using masking, this time with Tim Holtz distress inks dusky concord and shabby shutters, spritzed with Glimmer Mist pearl to blend the colours and stamped the image with Versafine imperial purple. The sentiment is Penny Black 2905H The Best stamped with the same ink, then I very lightly dabbed the same two TH inks with a sponge to give a shadow effect around the writing. I also stamped some dragonflies with Penny Black 3395D.
The background DP is from stash so no idea of the make and the green spotty one punched with Fiskars threading water is from the new Polkadoodle Paper Boutique CD. Two buttons and ribbon added to the centre of the two flower heads to embellish.
Posted by brenda at Tuesday, March 09, 2010

Hello Brenda. You always manage to come up with something very special and totally beautiful . Such pretty colours, lovely image and I just love the verse next to those flowers. Very classy.
I hope you feel better very soon Brenda.
With love, Sandra xx

Very beautiful Brenda. I love the inked panel and the gorgeous colours. The stamp is gorgeous too!
Clare x

This is such a beautiful card Brenda,
the colours are so perfect.

WOW B gorgeous card!! I really love the softness with the colours it's spot on lovey

Evening Brenda. Sorry to hear you're feeling under the weather. Hopefully it won't last too long.
Spring certainly seems to have arrived although I agree that the bulbs are a few weeks behind, it's lovely to see the sunshine though isn't it.
I love your card, I can understand why this stamp is going to become a favourite, it's gorgeous, as are the colours you've used.

thanks for your hard work Brenda. you done good!

You've done it again Brenda! Another fabulous card and I absolutely love that green/mauve combo.

Hi, Brenda, hope you feel better soon. The card is fabulous - colour, stamps, the lot. I really realy love that stamp - and the Stampendous one you mentioned too.
When I was at Kew Gardens on Saturday, all the bulbs are late (later than the last few years anyway) - the daffs are only just coming into bud now.

Sorry you are not feeling to well, colds are so miserable but pass quickly I hope. Beautiful card makes me think of heather and honey, which by the way is good for colds warm honey and lemon. Yeah St Patrick had me stumped but needs must and all that, thanks for your kind comment.

Morning Brenda, I hope you are able to shake this cold quickly. What beautiful card...love the colours and the buttons and bows in the centre of the flowers.

Sorry to hear your under the weather Brenda, hope you feel better soon...
Love the card...those stamps are gorgeous...love the colours you worked with...really lovely design
love the buttons too, great idea...
x
Vicky

This is really gorgeous Brenda. Love the colours you've used.
Sorry to hear you have a cold and hope it goes really soon. I'm hoping to avoid one as my daughter has just gone down with a nasty one and is coughing as I type this!
Thanks for your comment on my canvas, I'm really loving doing something a bit more permanent.
xx

Its gorgeous, perfect colour combination. No wonder you have a cold mrs, you need to slow down, take a breather lol.
Pinky

Hi Brenda - I can't be;ieve hw much I've missed this last week or so - I really must try to get back into blog hopping. They are all great but I really really love the one with the MS trellis pinch down the side edge.
Hope you are keeping OK. I look forward to seeing the crew from Sir Stampalot at the NEC.
Beryl xx

So gorgeous, love the stamps you've used and the colours are wonderful.
Happy crafting
Tracy x

Hi Brenda, sorry to hear you've got a cold, hope you feel better soon. I love this card, the image and the colours you've used are just perfect! Linda x

Wow! Stunning card! I love it! Lovely colour combo - a bit like those kaisercraft DPs we bought. That stamp is lovely! Perhaps I should put my leaf flourish away and get out my Stampendous P107 whilst you are giving it a rest!!!
PS you aren't hyper, hun, just delightfully enthusiastic, and of course I can cope with you!

Hi Brenda, what a beautiful card. I love the colours and the paper.
Love Cherie

This is such a lovely card. The colors are great.

Oh this is gorgeous, such beautiful work.
luv
Debby

I adore those stamps and the colours are fabulous! Sun splitting the sky in Scotland today - not often we can say that! Hope you are feeling more like yourself soon - Take care Cheers Claire x

Hi Brenda, wow love that colour scheme its my favourite colour. And your card is stunning those Hero Art stamps are so beautiful, I really ought to dig mine out. With love and hugs Shirleyxx

Great colors on this one Brenda. I really like how you threaded the ribbon through the buttons ... that's a great detail! Hope you feel better soon, I'll be thinking of you.

a really gorgeous card Brenda, love the colours and button flower centers. I'm afraid the sun went in and I walked to walk in cloud. janex

me again hope your cold gets better Bob and I have had one for over a week, very chesty now. bring on the nice weather. janex

gorgeous!! Love all the sponging you have done and the buttons in the centre of the flowers! Hugs Juls

Oh how beautiful!!!! Love the colors and the sentiment is lovely!
Take care of that cold!!!! Hugs to you!!!

Love this card Brenda the colours are lush and
and the image is fab.
louise xx

Here is a link for the easter basket.
Hope, this helps...
http://www.splitcoaststampers.com/resources/tutorials/easterbasket/

what a beautiful card, hope your feeling better soon x

Fabulous card. Love the image which pops from the card and the fabulous sentiment. Just perfect.
Love, Pat xx

So beautiful. These colors and so yummy together.

Lovely card!!! Have you thought about entering this for the current colour challenge over at the Play Date Cafe, just hit the links on my blog for more details :o)