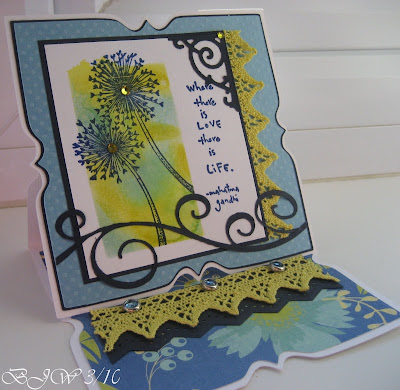 How's all you peeps today ? Hope you all had a good weekend, the weather was beautiful here, still hard frosts at night - minus eight last night again, but at least it's drying up a bit with the sunshine.

Before I launch into my cards, just to let you know I will be a bit late posting this weeks Stampalot candy winner because there is other news I need to share with you. So that post will go up later today, just as soon as I can get my rear into gear, but there is a new Hero Goody Bag on offer and all those who comment from this post onwards will be included in the next draw.

I have two cards to share, one for this weeks Penny Black challenge who are looking for "Easel cards" and it also fits this weeks Cupcake challenge who want "Flower Power", then Stamping for the Weekend are going "Monochromatic". I thought about combining them into one, but I have so many new goodies still to play with as well as needing to do samples for my upcoming demo day at Sir Stampalot decided on two...........whilst I am on that subject, dates for your diaries:
Saturday 13th March - Chris and Lou will be strutting their stuff
and
Saturday 20th March - yours truly will be getting messy with inks and Penny Black.
The first card an easel one which I cut our on the Cricut. I started by creating a background for my main image by masking a piece of cardstock and inking an oblong with Tim Holtz distress inks mustard and broken china and spritzing with Glimmer Mist pearl to make the colours bleed. The main image is Penny Black 4040K Sparklers stamped with versafine blue. The DP is an old piece from my stash and the swirl a Sizzix die run through the Big Shot. Lace and brads added to finish. 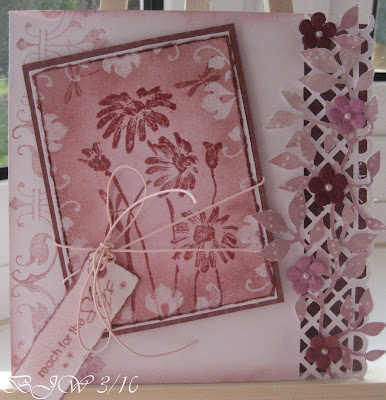 The second card has a resist background created with stamping Penny Black 3857H Footnote with versamark and embossing with detail clear then distressing with Tim Holts Victorian Velvet.......have you guess I rather like this new one ? I then stamped the main image Penny Black Daisy Fields stamped with the same ink and embossing powder. I overstamped here and there with Penny Black 3395D.

The border is Martha Stewart garden trellis with some Sizzix leaves cut from some of the new Magnolia DP's threaded through and flowers added. I stamped down the edge of the card with the same stamp used for the background and the sentiment is a section of Penny Black 4075F.
Posted by brenda at Monday, March 08, 2010

wow..these are so so gorgeous!! Love the colours the lace and the fab black swirl of your first card..love the gorgeous pretty pink one too, especially the vine of flowers coming up the side!

Morning Brenda, Both of these are excellent, n Im now wishing I lived nearer Sir Stampalot, so I could see you getting inky (lol) and learning a thing or 10...

breathtakingly beautiful Brenda..your work is astounding..your eye for design and attention to detail makes for the most wonderful creations...always memorable and exquisite

Both are beautiful but i prefer the TOP one I love the Masking so gain the retangle coloured piece on white very clever!

Hi Brenda,
I've just been for a good browse - looking at all of your lovely creations over the past couple of weeks and 'simply stunning' doesn't even do them justice.
I love your style and the diverse resources you use.
Full of inspiration.
Hope you're well.
Lesley x

Wow what a pretty pretty card just love it! Hope you are well

Brenda love that sizzix swirl do u know the name of it love to buy that pretty please?

Hello dear Brenda, both cards are so beautiful, I love the colors and I love your stil. Hugs and happy monday!

Brenda both of these cards are beautiful. Lots of detail on both.x

Afternoon, Brenda. Two more stunners! I love them both - the colours and the unusual shape of the first one, and the way you've woven the flowers into the trellis in the second. Gorgeous! x

Beautiful work again, the way you create the blackdrop to the flower stamps is just gorgeous. Love the soft feel to both these cards. Hugs
Pinky

Hi Brenda, wow what beautiful cards, you really are very talented and create such stunning effects with them.
The link to your Hero Arts blogcandy isnt working by the way. With love and hugs Shirleyx

Oh my goodness, your cards are so beautiful, I love them both, you are so creative x

2 stunning cards Brenda! My fav is the beautiful soft pink one, the colours are just so warm and lovely!

Both cards are beautiful. I really want to try one of those easel cards, I hope I get the chance to play this week since both kids are both feeling better.

More lovely cards, the trellis is beautiful, my friend in USA sent me a lot of punch outs very similar to this one, well done
Ann

Both of your cards are absolutely beautiful, Brenda! But then, your work always is! Hope you're having a beautiful day today!

Hi Brenda,
Where do you find your time! These projects are both stunning! I love the colour on the second one and the beautiful trellis with flowers growing up it.
Hubby has offered to take me to Sir Stampalot on 20th March. I have a fear of travelling so I will have to see if I can psych myself up to take him up on his offer.
Clare x

Oh girl,those are oh so gorgeous!!! When I grow up,I want to create just like you!!!

These are gorgeous, I especially love the colors in the first one. TFS!

Hi Brenda, first of all...can I say I would love to join you all...just wished we were closer...You,Chris and Lou have amazing blogs full of inspiration it would be lovely to meet you all...

But it seem's I have to make do with just drooling over your blog's...and boy am I glad I found you all...

Love, love ,love all your inspiration, I just don't know where you get your idea's from...you amaze me every time....and you have deffinitly given me the boost to be more creative and use lot's of different techniques...

Stunning card's...the first is my fav...just gorgeous colours and that image is beautiful...I love it...

Hi Brenda, so much going on lol! and all of it fab! The black on your first card really lifts all the other colours and I adore the background you've created for that beautiful stamp - its fabulous and the 2nd card is really pretty love the flower trellis effect and another gorgeous stamp. Slow down please.... you put us all to shame lol.

Love these beautiful cards, how gorgeous are those punched out swirls and corner.
Oh how i do wish there was somewhere round here that did classes
Hooray for blog land
Babs x

Both absolutely stunning! Love them!

Both of these are so beautiful Brenda I love them both and reading avidly on your techniques which always amazes me and the beauty you create is always ace.

Oh wow...both of these cards are stunning. I love the shape of your easel card and the flowers and lattice on the second card are amazing.

These are both absolutely wonderful Brenda. I can't choose a favourite they are both so lovely.

I love the unusual colours and shape of the first card and the trellis on the second card is such a brilliant idea.

Hi Brenda, loving the Sparklers card, have this one on my wish list and it looks awesome with the background you've created. Both cards are works of art and thanks for listing the details of how you made them.
Cheers
Cynthia

This is so beautiful Brenda. Love your style and attention to detail.
Hugs
Desire

stunning cards as always brenda and I love the colour combo on your PB...thanks for joining in the fun at PBSC this week..hugs kath xxxx

These are both lovely. the top one is so vibrant and the second one is so delicate with that trellis.
Linbyx

Love the both cards, which cricut cart did you use for the easel card? Love your style just had to become a follower..

Both cards are stunning! Love the easel card - such cheerful colors.

Wow, these are beautiful. Love them both. Great colors. Love the lace.
Thanks for joining us at SFTW.
Gunn :)

Incredibly pretty card, gorgeous choice of papers and colours and a fab image...thanks for joining us at Cupcake :) Donna x

Both gorgeous cards, Brenda. I love the stamps you've used.

Finally able to comment - the first card is great and beautiful, but the second one is a dream!

Hi there Brenda, I too love both cards, I couldnt choose between them though x Leigh x

2 beautiful cards brenda - i love the easel card ( they are my fave design at the moment) - especially the crochet border
Lisa ;)

Beautiful work. Thanks for joining us at CCC.