Passion for Promarkers and another Gray 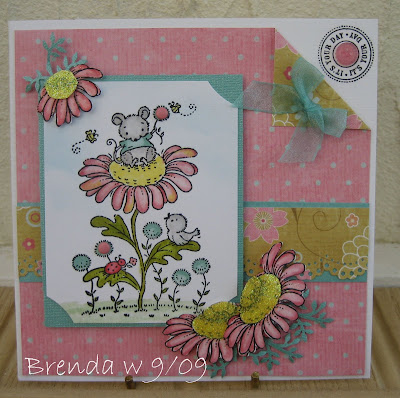 Don't shout too loud, but the sun's shining this morning, first time since Saturday in these parts, mind you the wind is oh so cold. The horses are non to impressed either and think it's time to move indoors full time for another winter of pampering. Do you know, if us humans spent a whole season doing little more than eating and drinking apart from the odd hack out, we would take on the appearance of sumo wrestlers.......so what's so special about a horses metabolism that they don't have the same problem ?

After all the activity of the weekend, buckling down to crafting is tough.......think Jules and I talked so much that out energy levels needed to replenish, but it was a fabulous day.......and a little secret, we have another one planned for the NEC. I have never been there before, so going on a strict regime of no spending until then - as if.
On to my card, Passions for Promarkers this week wants to see 'Polka Dots with an open colour combo'.......gives those of us lucky enough to have the new colours the chance to try them out.......one major nightmare here though, guess what I discovered...... there is another gray - gray green. I am also combining this card with the recipe from the Creative Card Crew which is '2 DP's, 3 flowers, 2 brads, 1 button and 1 ribbon'.
My image is from Stampevia WDS410, coloured with a mixture of Promarkers including Tulip Yellow, Pear Green, Salmon Pink, Antique Pink and Gray Green - all new colours, along with a few of the originals. I stamped and coloured the flower three more times and glittered the centre. The DP's are My Mids Eye, the border punched with Martha Stewart Doily Lace and the leaves are also punched. I cut down one of the flowers and reassembled in the top corner as I felt it was too large. The circle greeting is Hero Arts A4981 and finally a button , ribbon and two brads - centres of two of the small flowers on my image. Considering I don't do cute too often I actually quite like this one.
Posted by brenda at Wednesday, September 16, 2009

gorgeous card Brenda, great to see the new colours being used
thanks for joining us on PfP this week and good luck
have you tried the PfP blog hop to try and win the 56 new colours yet?
Debbi
xx

That image is absolutely gorgeous and the colours you have used are so pretty! Lovely card!
Dazie
x

Such a pretty card Brenda. Love the image you've used and the colours also. Thanks for joining us this week at PFP. Hugs Michele x

Love it when you post a card in time for me to see it during my lunch break - very considerate of you!!

I love this one. A real super-cute image. Are they all new proMarker colours?

I am so, so pleased to hear that there was a new grey in your latest delivery - there was definitely a gap in the market for another!! LOL!!

Can't wait for the NEC - but am not going to start counting how many "beds" or "sleeps" it is yet.

Beware though!!! If I sapped your energy on Sunday just wait until you experience a full day of me .. .. I wear everyone out eventually!

Beautiful card, love how you used the flowers as embellishments too. Great colouring as usual. You'd better be careful of that Jules one lol.
Pinky

This is beautiful Brenda, I do like these images and you have coloured this one beautifully. I think it's great how you've used part of the image for embellishments. I feel the need to buy some Promarkers coming on!!
Clare xx

Oh this is gorgeous, beautiful job with the image and great colours.
luv
Debby

I love this!! such a gorgeous image! I love the turned down corner and the sparkle on those flowers, gorgeous card!! Love it!!

Afternoon Brenda. You're right to be pleased with this, it's gorgeous. Not too cute, just right. I love those flower embellishments from the stamp, what a clever idea. I also love Mr Snowman from your last post, he's so jolly.
Glad you've got the sun today, there's no sign here and it's ch ch chilly!

Beautiful card, Brenda. I love everything about it - the image, colours and papers.

G-O-R-G-E-O-U-S! Love absolutely everything about this card - the image, colours, papers - its just perfect!

This is adorable Brenda. Love the super cute image and the folded corner just adds that extra finishing touch. Thanks for your kind comment over at Doing Life. Its my first visit here and I love it. Added you to my Google Reader and will be popping in here more often.
Hugs
Desire

Gorgeous card!! Love the colors and this image is so cute!! Every detail is just so pretty!! Love this card!!
Thanks so much for your lovely comment on my blog!! I am glad I stopped to see whom it was ~ your blog too is beautiful!
:)Kathy

Sweet image with great coloring technique! I'm amazed by your flowers -- my scissor work is never so neat. Fun touch with the folded down corner, too!

Hi Brenda, what a cute card. I love the sweet image and your colouring is fab. Great papers and love the layout. Thanks for joining us at PFP this week. Hugs, Denise x

I don't do cute - but this is beautiful! Cheers Claire x

Fabulous image, such a cute card

This is such a pretty card, thanks for joining us at PFP this week. x

You'll love the NEC. I went there for the first time in the Spring and I'm going again to the next one. Will you be bringing carrots? You know the wind comes straight across from Siberia there don't you. I don't miss that.Sophisticatd cute is how I'd describe your card.It's gorgeous. Just love those flowers.
Beryl xx

Beautiful card. I love the cute image, papers and colour scheme you have used, topped off with the wonderful 3D'd flowers. Thanks for taking part at CCC challenge this week.
Sam x

Wow, love this. What wonderful colors and I love that you've stamped the flowers again. Beautiful!

Oh,my..this is wonderful!The image is so sweet!Lovely colours and beautiful details:)
The colouring is stunning!
Have a great day:)

Oh I love this - all pinky and girly - super cute Brenda! xx

Beautiful card! Love the layout and the image is coloured beautifully. Thanks for joining in the CCC Challenge. Donna x

Branda, your card is so sweet and super cute... i love the papers and the colors...;-) the image is very pretty AWESOME! hugs and happy day. Silke

Brenda this is a beautiful card! Love the sweet image and your coloring is gorgeous. You have used the perfect papers and love the flowers you have used for the embellies!
Hugs,Connie

Hi Brenda,
no words to say how much I like your card... simply gorgeous!! Great colors, great details...
great!!!
Hug
Sadia

Brenda this is gorgeous love the image and papers. Thanks for joining us at PFP this week. Sue :o)

This is a lovely card Brenda - Beautiful colours!

brenda what a gorgeous card and beautiful colouring , i love it, thanks for joining us at pfp this week
hugs
helen x

What a stunning card! Your design is superb. Love the papers and embellishments and that's such a cute image too.You've used the recipe so well. Thanks for joining us at the Creative Card Crew Challenge.
Sharon xx