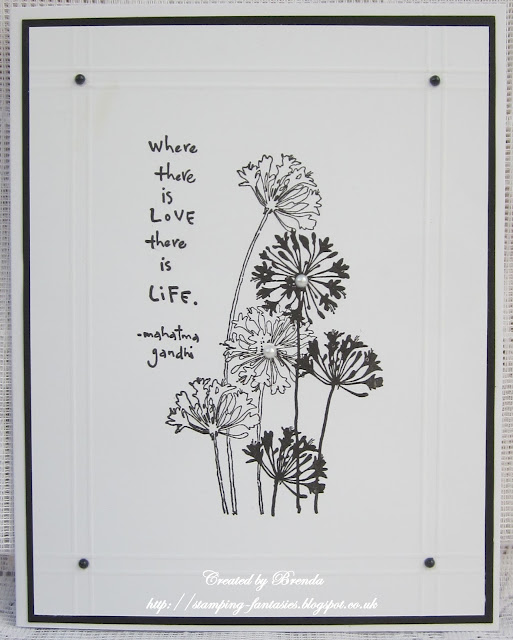 Morning Peeps, this weeks Allsorts theme is hosted by Wendy and she would like to see 'Black and White only. We have two stamps from Rare Earth, the stamping arm of Tattered Lace as a prize for one lucky winner.

Such kind messages from so many of you regarding my health after last weeks post, you are all soooooo kind. Nothing new to report at the moment, several appointments this week and all sorts of tests and will hopefully have some results Monday giving a clearer idea if the declining kidney impairment is permanent or due to some sort of blockage. The latter would be the better of the two options as it may be treatable.

The top card was a pretty simple one to create stamping my all time favourite stamp Stampendous P107 Agapanthus Cluster with Versafine black and the Penny Black sentiment. Using a score board I added a frame around the stamping and finally some pearls to the flower heads and corners. 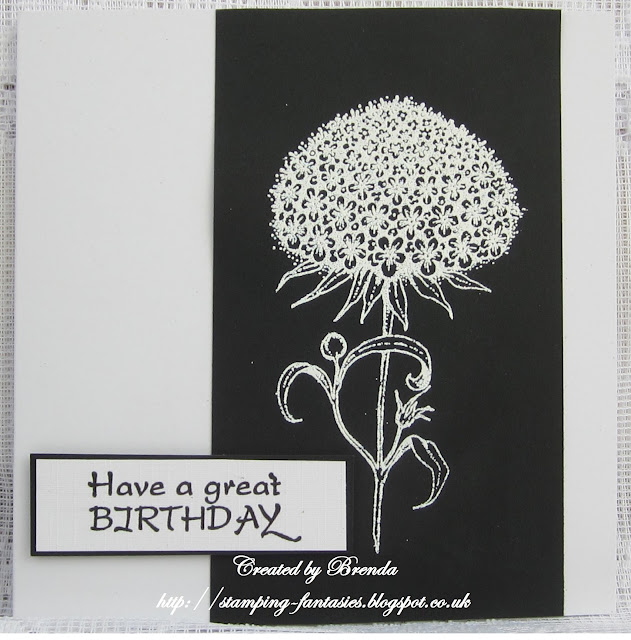 And here's a second one which I found lurking in my Chocolate Baroque folder un-blogged and it fits in rather well with this weeks theme so I thought I would use it. Very simply done, the image stamped onto back card stock with Versamark and heat embossed with detail white, the panel mounted onto the base card and a CB sentiment stamped in black.

both beautiful cards, Brenda! hope you get some good news next week xx

Two lovely monochromatic cards Brenda - makes a card so classy instantly. I do hope that you get some results this week and that you are going on ok at the moment Brenda - I send you my love as always xxxx

How much I love the quote in the first card, Brenda! :) Really a wonderful thought! Love the delicate feel of your first monochromatic card, and the second one - wow!- such great impact with that big white bloom on black!!
Send you my very best wishes for your health and fingers crossed for Monday results, my friend!!! God always blessing your way!
Heartfelt hugs!!

Both beautiful in black and white; sometimes that is just looking so good between all the bold colours... Sending some positive energy your way! Hugs, Gerrina

Two wonderful black + white cards Brenda, especially the one with your favourite agapanthus stamp. Fingers crossed all goes well for your tests and they will be able to treat it. Take care xx

Beautiful, Brenda - black and white is always so striking, but really does take a bit of skill - and you've done a great job! Just noticed the fairy beneath this post, too - you are incredibly versatile!
Cath x

Two very elegant cards, both beautiful.Fingers crossed all goes well for your tests and they will be able to treat it.
Giving some positive energy to your way!
warm Hugs from faraway hellerlittle

Both cards are beautiful with the gorgeous florals and wonderful design! Black and white make such elegant cards, really enjoyed Wendy's challenge this week!

Two beautiful cards Brenda, the first a lovely CAS design and the second has such a spectacular image. Hope all goes well with the tests.

Hi Brenda
I clicked on a pic on someone elses blog and ended up here.
Love your monochrome CAS card and the sentiment is great.
I also wanted to wish you well after reading about your kidney issues. I too was diagnosed with CKD last year which they graded at 3A which dropped quite quickly to 3B which is very low for my age and frightened the life out of me. They couldn't find why after a load of blood tests and I ended up having a kidney biopsy a few weeks ago, which still didn't reveal a cause but not as much damage as they nso they sent me for a Nuclear Medicine GFR test, which gives a accurate GFR rather than blood tests, which can be inaccurate.
The outcome of this is my true GFR is actually 23% higher than the blod tests were showing so, although I still have CKD, its currently stage 2.
This was such a relief. Sorry this is so long winded but I wanted t say, don't lose heart as hopefully things may be better than you anticipate.
If you haven't had a true GFR test done, ask for it in case the blood tests are wrong.
If you know all this already, apologies but I know what its like to be worried about this.

With all good wishes.
Ang x

I always love black and white - so elegant. Your cards are lovely Brenda

Gorgeous cards B and a wonderful theme for Allsorts. Off to find out what's bee going on - makes whining about this back which has flared up seem like I'm a real wimp!

I love these striking black and white cards Brenda, I am determined to play along this time. I have my fingers crossed for a positive outcome Brenda xx

Hello my mate. Two lovely creations (but then you already knew that...)
Hoping no more injuries next week and hoping your news is only good. x

Two really lovely cards Brenda, gorgeous CAS and lovely image. I have the second stamp and you have reminded me that It is time I gave an airing, looks fab the white on black.

Both beautiful cards Brenda, I especially like the second one. Good luck tomorrow x

Two amazing classy card design they are so beautiful I hope the tests go well and that they are able to treat you with success. Sending my love you take care of yourself Carole x

I'm happy you posted these two together. I love the black/white simplicity of these, and that Agapanthus stamp is one of my favorite flower stamps that unfortunately has been neglected. Thank you for your inspiration to get it out!. Sending good wishes for a positive result next week. Hugs!

Very beautiful and very striking cards Brenda. Crossing everything for you xx

Stunning cards Brenda - I always think black and white is a challenge but gives such great results.
I do pray your kidney results are the better option...
Blessings
Maxine

Gorgeous cards, love the addition of the pearls. I am keeping you in my thoughts and hope for the better option for your kidney results. Creative Blessings, Tracy x

Two fabulous cards, Brenda, so stylish in black and white.

Hope you get the results of your tests soon. xx

These are both such gorgeous cards, mono can be so effectve

I love B&W, but seldom seem to actually use it for a card! These are gorgeous, Brenda & I absolutely love the sentiment on the first card!

Both cards are beautiful and elegant
Happy crafting
Tracy x

Two lovely mono cards Brenda. So sorry to read about your health problem, hope you get things on an even keel soon and can enjoy your crafting. Really helps doesn't it with what life throws at us. Take care xx

So pretty and elegant as only you can do!!
Cheers
Dr Sonia