Flower Power and Crafting Live tickets to give away 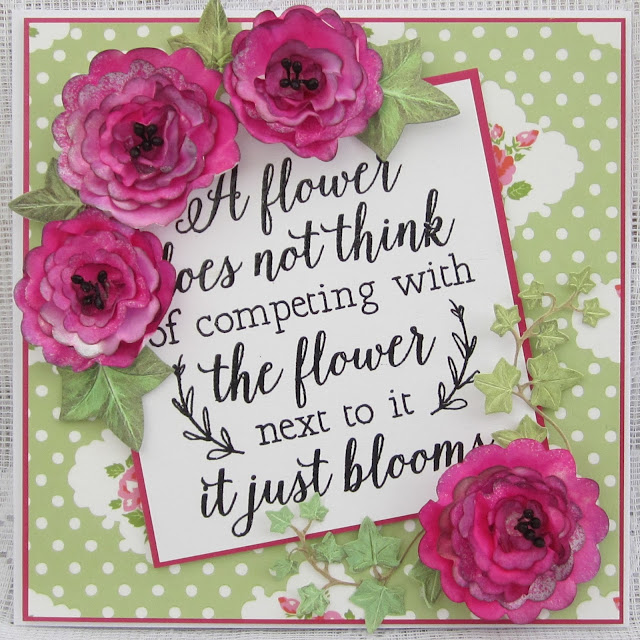 Morning Peeps, it's Saturday so that means it's time for our new challenge at Allsorts and this week Tracy has chosen the them of 'Flower Power', one I think we all enjoy. Our sponsor is Tattered Lace and there are three prizes to be won.

It's been a bit of an off  week here, too hot to craft, plus I've not felt too good and will be pleased to get my next surgery over and done with. And we have one very poorly Holly. When a lab doesn't eat you know something is wrong, a trip to the vet, bloods and scans and a diagnosis of a Pyometra and Panreatitis. She had a big operation on Tuesday and seems to be doing OK and is now eating again, but lost a whopping 1.1kg in that short time. Poop baby, so much to go wrong when she is only four.

Back to craft and I have some tickets to give away to Crafting Live in Doncaster on 15th/16th July. I realise distance means not everyone can get there but it you can and would like tickets please leave me a comment on this post, if there are several of you I will draw a name and be in touch. 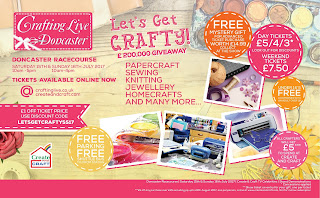 The card above is one of my samples for a recent Create and Craft TV show featuring a new release from TL's Fleurs Flower Forming range. The flowers were made from card coloured with Dylusions and Mica Spray and then cut and formed using the Fleurs system. The DP is from stash although I have no idea of the make, the sentiment is Rate Earth and I tucked some TL Ivy around the flowers.

Happy weekend all and do pop over to the challenge blog to see all the lovely flowers on display from my teamies.

Poor Holly, yes, B when a lab won't eat there is something wrong....hope all gets well for her and you so take it easy.
Beautiful flower card, just love this and I am hoping to enter the challenge, mainly to challenge myself with new foamiran flowers.xxx
Have a lovely weekend.♥
[aNNie]

Morning Brenda..what a lovely card and your flowers are beautiful...so sorry to hear Holly is poorly so awful when our pets get sick as they can't talk and tell us whats wrong...hope your next surgery goes well sending you a big HUG...
Anne x

Poor Holly,hope she is doing better. Must be such a worry for you. Hope you are feeling better and may the operation go smoothly for you. Sending hugs and healing prayers. Love the card, great flowers.

So sorry to hear about your Holly...prayers and wishes for a fast recovery for her. Give her a lot of doggy hugs from my side. Hope you feel well soon too Brenda. I have myself been feeling pretty blue and just today forced myself out of my stupor and visited my blogger friends. Such beautiful flowers on your card Brenda.
Cheers
Dr Sonia

Hello Brenda
Sorry to hear about your health and that of your dog. I, too having been feeling under the weather this week but am on the mend now especially since the temperature has dropped about 10 degrees. I haven't been crafting for what feels like ages but I did manage some colouring yesterday so I am definitely on the mend.
Your card is beautiful as always, the flowers are amazing and the sentiment is perfect.
Take care
Lesley

A really gorgeous floral card Brenda and love the colour combination which is a favourite of mine too.
So sorry to hear you have a poorly pooch and hope that Holly is back to her old self very soon.
Fliss xx

Look at those beautiful flowers Brenda, I also love that sentiment! I hope Holly continues to improve and yourself of course too. (Don't consider me for the Crafting Live tickets as I only get back from holiday on the 14th of July!) Have a lovely weekend - it's so much nicer being that bit cooler isn't it - my boys are far more comfortable at the moment. xxxxx

Oh such a gorgeous card Brenda, those flowers are fabulous and the card design is lovely. Sorry you haven't been feeling too good this week hope you are soon feeling much better and poor Holly hope she is soon better too. Hope you enjoy a cooler weekend.

What gorgeous flowers on this card Brenda, they are truly wonderful.
I hope Holly recovers well from her surgery, such a big op for a young dog. Well wishes for you too and your upcoming surgery, hope all is well.
Lorraine

Wonderful card. I hope both you and Holly recover soon.

Love your card, Brenda and what a fabulous sentiment! Hope Holly makes a speedy recovery.
(Please don't put my name in the draw for the tickets. Although I would love to go, unfortunately I live too far away.) xx

Hope you are feeling a bit better Brenda - hope Holly is too.
Gorgeous card - love the flower die they are so pretty. Too far for me to travel unfortunately.
x

Gorgeous flowers, they look really beautiful with all the layers. The pinks really complement the love greens too. Brilliant sentiment.
Guess who forgot to mention the tickets?

Such a pretty card! Your flowers are beautiful and I love that sentiment! Sorry to hear about your dog. I hate when my dogs get ill too. Hope she gets well soon. That sentiment is for you too. Is the surgery soon? Prayers and hugs, Robin

What a pretty card and wonderful sentiment! Love the ivy die cut!

Gorgeous flowers on you lovely card Brenda. Tickets not for me. Xx

So sorry to hear about Holly, hope she get well soon!Also hope you are feeling well, now!
Love your sweet card and the pink flowers look amazing!!
Don't put my name in the draw for the tikets please, I'm too much far from there :D

It never rains, Brenda... You have my best wishes and commiseration.
Your card is pretty and I love the dimension and colours of the flowers. Ans sadly, Doncaster is too far for me...

I hope all goes well for your surgery and Holly gets better soon.

Hope your surgery is soon over and you start to improve soon. Poor Holly hope she is better too. I don't like it so hot and it doesn't help when you feel poorly. Your card is beautiful, love the sentiment and those flowers are lush.

A beautiful card Brenda, I love the sentiment you've used on it. Hope that Holly is well over her surgery now and you don't have to wait too long for yours.

Oh no poor Holly! Hope she recovers quickly Brenda. I am loving those gorgeous flowers and the sentiment is so perfect. Need to get that one!!

Oh my Brenda, poor Holly, I hope she improves soon, I'm sure she will have loads of TLC.
I also hope that you too are recovering well.
I love your gorgeous floral card, and what a beautiful sentiment. take care and a hug for Holly, Kate x

Oh poor Holly! She's the same age as Fritz--just had his 4th BD this week. Can't imagine having to go through so much when she's young! Hoping she has a full recovery & is soon back to her old self! Those are some of the most beautiful flowers ever, Brenda--gorgeous card! Wish I was close enough to go to crafting event--would be so much fun & I haven't been to a stamp convention in years! Thinking of you & hoping things improve!

Beautiful flowers; look like you just piked them! And a great fresh card in these colours! Hope you had a good weekend! Hugs, Gerrina

Hi Brenda, the card is wonderful... great flowers. Oh menno, I could have shown with my card at Allsort. I need to link it to my sidebar.
All the best for your Operation and for Holly.
Hugs Carola

Beautiful card!
have a nice day!

Brenda dear, I hope you feel better. Please keep us updated. Such a beautiful card. I love the flowers. So pretty. I wish I was close to the crafting event.

Happy Birthday Brenda, hope you have a fabulous day and get spoilt rotten.
Such a lovely card with those super flowers and I love that sentiment. Sending a big get well fuss for Holly xx

So sorry to hear that both you Holly are unwell. I hope things soon get much better for you both Brenda.

Your card is beautiful and I really like the sentiment. Barbxx

Oh poor holly I hope she is on the mend and I that your op is soon and makes you feel a lot better. I love your fabulous card those flowers and that sentiment are just perfect Take care Love and hugs Carole x

Beautiful card and I love the sentiment. Sorry to hear Holly is unwell, it's such a worry when fur babies are ill. I hope your next lot of surgery makes things much better. Creative Blessings, Tracy x

Gorgeous card! I love the pink and greens together. Hope your dog (and you) are better now.

Have a wonderful friday!
Sussie

Gorgeous card B, and thanks for popping over,.. I was going t or link those cards to stamping sensations favourite stamp June challenge but was too late, missed one made other two, never quite sure when it ends.
Lovely card. Sorry you and Holly dear have been poorly, pray she's over her troubles with the op am doing pray for yours too, mm, think I might email you for the date so I can pray for the date not just genera. You asked.. so I'm well but very flat out .. family commitments.
Thanks for sharing your inspiration! Would love to attend the fair but guessing no flight tickets included ;)
Shaz in Oz.x