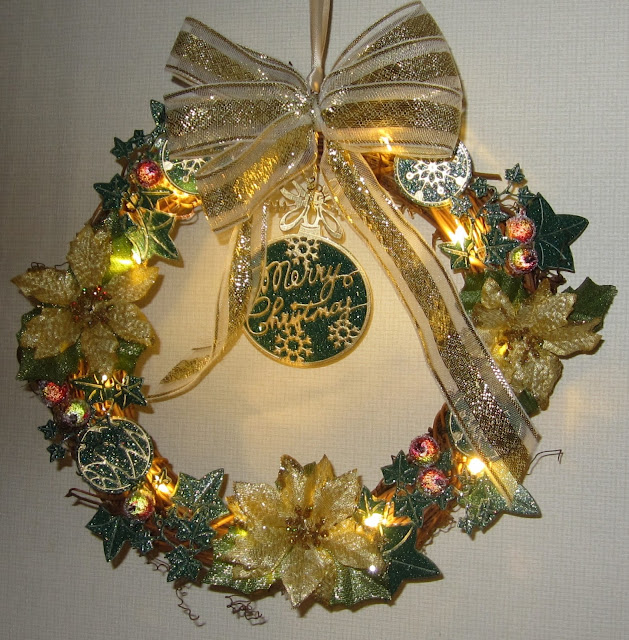 Morning Peeps, sharing some Tattered Lace makes from the last few weeks, but as I've not been able to do much crafting or typing as it's so painful with this latest MS flare up it means several of the new dies have already been featured on Create and Craft TV as have the new LED lights used on the Christmas wreath above. 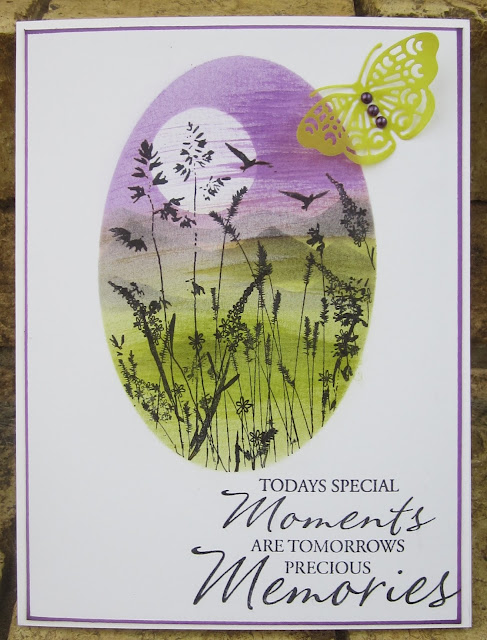 I also have a card for the current Butterfly Challenge which was one I made a few weeks back when I was having an inky session and I think it fits the current theme of Butterfly, oval and/or olive. Using an oval mask I sponged Adirondack purple and DI crushed olive, masking a sun. The grasses are Penny Black Natures Paintbrushes and Aspire and the sentiment Inkylicious. The Butterfly is Tattered Lace. I am also popping over to the Snippets Playground with this one (offcut of very old vellum for the Butterfly), should be fairy safe as I'm not up to creating too much mischief at the moment. 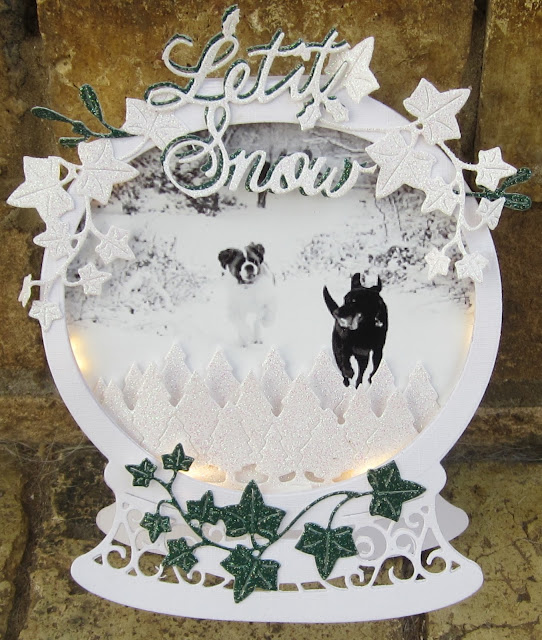 The Snow Globe 2016 and one of the sentiments from the set, LED lights, TL Ivy and a photo of George and Bernie in the snow a couple of years ago. Big as he was Bernie so loved to play and found the snow great fun 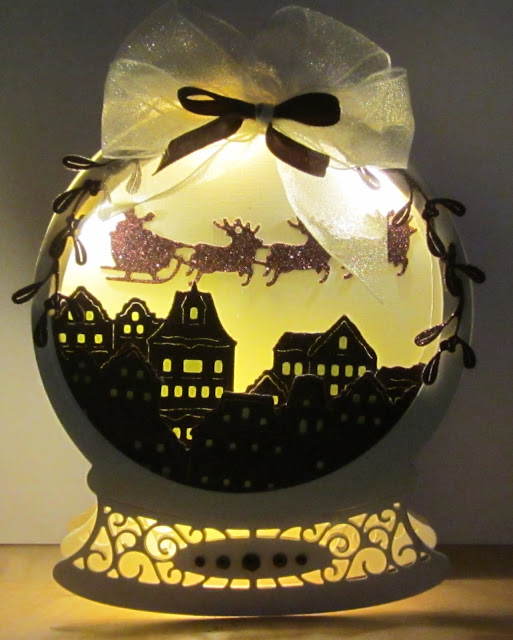 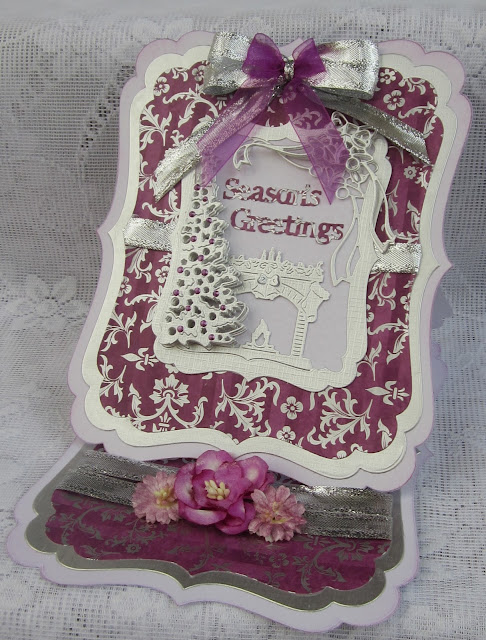 One of the new Melded dies 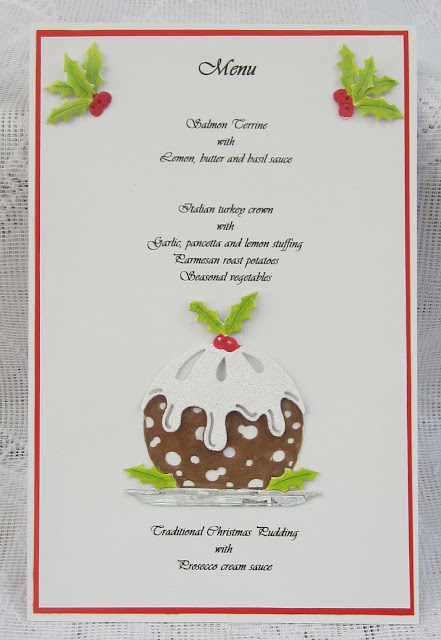 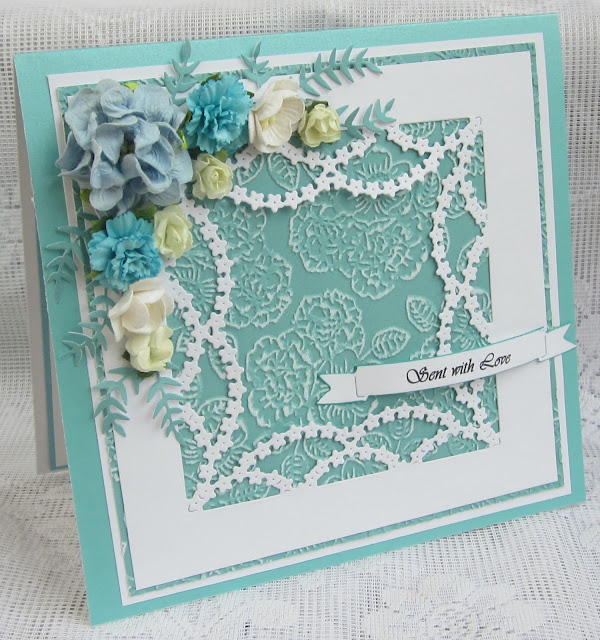 One of then new A Little Bit Ditsy frames

Many thanks for taking a peek.

You have been busy! I love all the designs shown today :)

I just deeply sigh when I see these beautiful work of artistic creations B, love TL, but over here they are so expensive so I just admire yours. Love the snow globe it is stunning, oh they are all stunning...take care and hope the meds kick in soon...sending hugs..xx

Oh Brenda I do hope you begin to feel much better soon and your MS symptoms are reduced.
Your lovely post today is full of gorgeous cards and projects and I always get lots of inspiration and ideas from visiting here, you are one very talented lady.
Lorraine

Such a variety of beautiful makes, Brenda. It's hard to pick a favourite. Love your pretty wreath and the depth you've created on your oval scene, but I also love your other Christmas makes and the pretty turquoise frame.
Sorry to hear your MS is playing up again, Brenda. I'm hoping things will settle down again soon. I suppose it won't be long now before you take your trip?
Marianne x

Wow Brenda! First of all, I hope this latest flare up settles down soon for you :( You're obviously a real trouper but I can tell how hard it is for you. Sending good wishes for better days ahead.

And what a stunning array of cards etc. here - and those LED lights are fabulous!! I adore your snippets card of course, perfection as always. I have that sentiment in the toy box I suspect as a future prize :) Wonderful background to that gorgeous scene!

Oh wow Brenda even when you are not well you create such amazing creations...love the snowglobe
Cheers
Dr Sonia

WOW, not sure what else to say after seeing all this gorgeous work!! Wow!

Oooooh, so many gorgeous creations, Brenda! I love all of them!

Oh Brenda, I'm blown away, what wonderful cards and your wreath is stunning, I wish I had your creativity,you talented lady you.
I do hope that your flare up settles down soon,Kate x

Wow what a fabulous selection. Love the lighted wreath and the snow couple are adorable.

Love them all!!!
Hugsss, Gaby

Such a lovely variety Brenda, I really like that frame die

Hoping for a hasty end to this episode for you Brenda. What a fantastic array of fabulous makes you are treating us with today. I spotted the lights on C&C last night and thought they were wonderful...seeing your brilliant makes have confirmed it! The menu looks fantastic too but the star here has to be your gorgeous dogs xx

Hoping for a hasty end to this episode for you Brenda. What a fantastic array of fabulous makes you are treating us with today. I spotted the lights on C&C last night and thought they were wonderful...seeing your brilliant makes have confirmed it! The menu looks fantastic too but the star here has to be your gorgeous dogs xx

Wow!! So many beautiful creations!! The wreath is stunning!! The cards are gorgeous!!
-Berina
Moxie Craftie

A gorgeous selection of projects Brenda, The Christmas projects with the lights look fantastic, and the final card in turquoise with all the pretty dies and flowers is just gorgeous.
Hope you are feeling better soon
Lorraine x

Hey, you are a little star.
Some fantastic cards here Brenda, certainly can not pick a favourite, each one has a special item.

Hi Brenda,
what a very lovely card.
I love all your wonderful inking scene in that lovely oval shape.
Thank you for joining the Butterfly Challenge with this.
Lots of crafty love. Jenny L. GD

Your Tattered Lace designs are so very super and brilliantly created also.

oh my Brenda - you have been so busy and each piece is of the most beautiful design and quality - I am in complete awe of your talent! Take care lovely lady xx

Hi Brenda
This is such a wonderful early Christmas in July celebration with all your stunning crafti goodness right here. Loving your fur babies having fun in the snow. Hope you are feeling better today.
Healing hugs Desíre {Doing Life}

Very nice crafts! They are all amazing.

The snow globe and flowercard on the bottum look great, but since I'm waiting for summerweather and don't want to think of cold and rain (as it rains here for two weeks now...) the scene is my favorite!
Sending some positive energy; it looks like you can use a lot! Hugs, Gerrina

Wow Brenda, all of these are just amazing, those snow globes took my breath away, and the cards of course are stunning, all of them, but specially that easel.

A brilliant set of cards once again. The wreath is especially fabulous and would look amazing on a door at Christmas time. I hope your MS begins to calm down soon.
Crafty hugs
Lesley

All fabulous projects. Hope you feel better soon. Sent an SMS prayer for you.

Love the one layer scene. Superb colour mix. Indeed perfect for my butterfly challenge. Thankyou for fluttering by. Your card will be entered twice. Hugs Mrs A.
I love your wreath.

I'm so sorry to hear that you're still not up to par. These are such wonderful creations. Thanks so much for sharing each of them.

Such a beautiful selection of cards. Hope you feeling better soon.

stunning , beautiful makes , I loved the Christmas set on C&C for tattered lace but it was soo pricey . Sorry your hands are sore , I have bad arthritis in mine and have pain and stiffness all the time , not as badly off as you though , hope it gets a little better . jane x .

Brenda, your beautiful TL projects are incredibly fun and imaginative! Gorgeous in every way. I'm very sorry to hear about your pain. I had hoped you might have remitted some by now. What an incredibly positive influence you have on your followers. Brenda, you inspire me. Thanks so much for being "you". Praying for better days soon. xo

Stunningly clever creations B., so hard to pick a fav... am sorry that you are so poorly still and praying much for a settling down of that nasty MS for you, ASAP, not fun at all..
Thanks so much for the inspiration.
Shaz in Oz.x

Hi Brenda, hope you're starting to feel a lot better. Such a stunning collection of makes - favourites have to be the oval and butterfly with that fabulous sentiment and also the christmas wreath with the lights. Take care xx

Hi Brenda, talented lady, wow so many beautiful projects to enjoy. I've also scrolled down to see the other beauties that I've missed. I'm so sorry that you are experiencing painful flareups. I came over from the CB DT Blog where I was admiring your beautiful CAS art as well. Take good care of yourself, Shirleyxx

So many gorgeous creations! These snow-globes are so creative. I love the menu...when is dinner...lol. My prayers are always with you. You amaze me with all you create. Hugs, Robin

I'm in love with all the Christmas projects, Brenda! The lights give such a neat look--I gasped when I saw the wreath, but oh how the doggy snow globe stole my heart! The last card is also awe-inspiring! Hoping the flare up is soon gone!

Wow Brenda these creations are sensational and very festive, except the butterfly one which is a beauty, the new dies look fantastic especially how you have used them, they are full of so much wonderful inspiration. Brenda I am sorry to hear that your health is not good at the moment I do hope that the pain eases soon
hugs
lorraine x

These are all wonderful and I love the gorgeous wreath.

Wow what a great selection of inky cards.