More garden blooms and a snippet 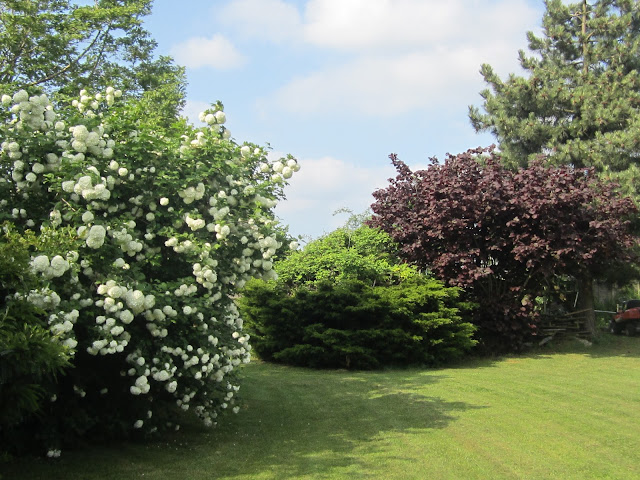 Hi Peeps, not sure what your bank holiday weather has been like but it's been pretty disappointing here in the Fens, we did see a few spots of sunshine yesterday but with a very cold wind and today it's just grey skies along with even more wind. We have visitors but have managed a bit of crafting while they are off on their training runs.

So I thought I would share a few recent Tattered Lace makes and a couple more photos which I took in the gardens on Friday when there was some sunshine. 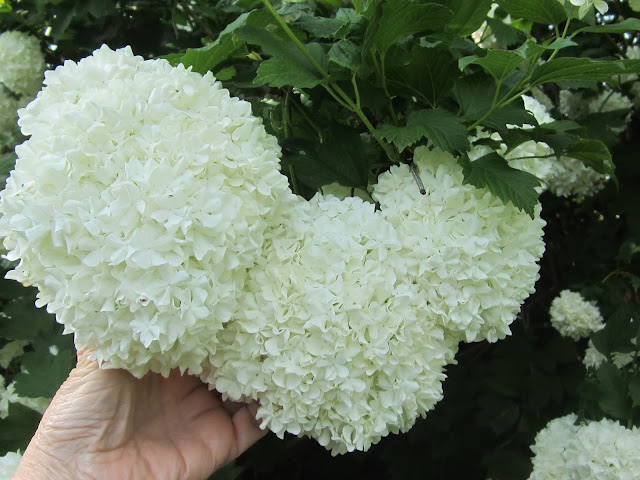 This Viburnum Opulus is now fully out (photo at the top) and I also took a close up against my hand so you can see the size of the huge blooms. 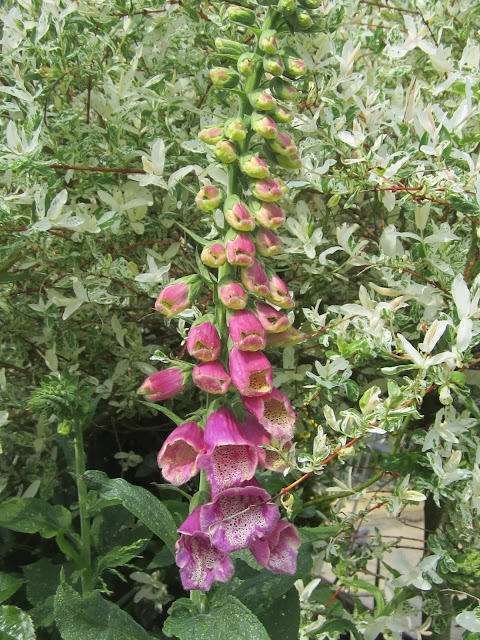 My first Digitalis is coming out, this is one of several selfsets which have popped up around one of the Japanese Willow beds, it's not an ideal place for them to be growing but seemed such a shame to uproot them until they have flowered. 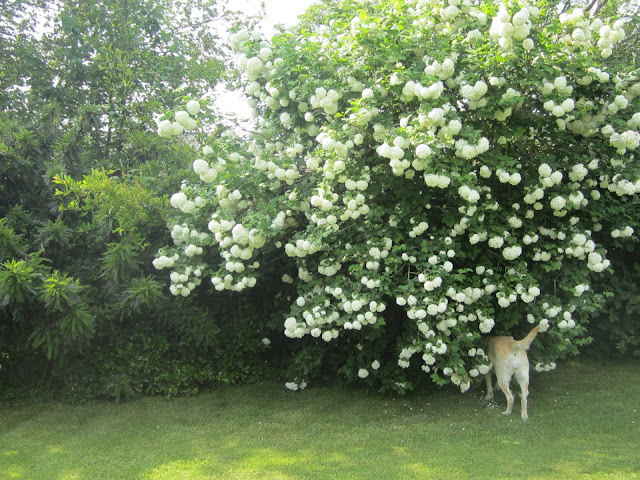 I couldn't resist taking this photos, amazing how many things of interest to Labradors there apparently are under shrubs because this is a scene I see over and again. 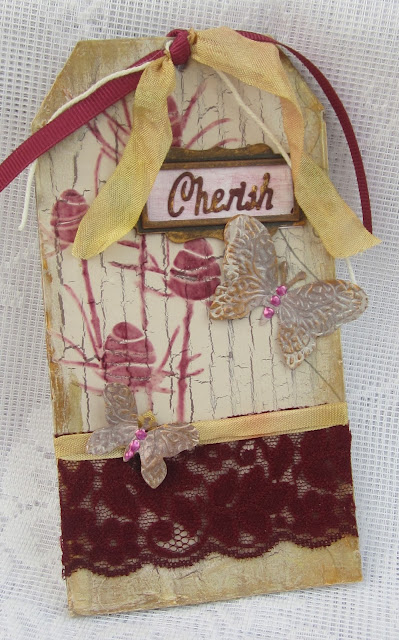 And now some TL shares, above a tag made using the new Essentials tag set which premiered on Create and Craft a couple of days ago, I made a few of these in different colourways as it's a great way of using up snippets of the thick packaging card that I have a habit of hoarding. I am popping over to the Snippets Playground with this one to see what mischief can be had. 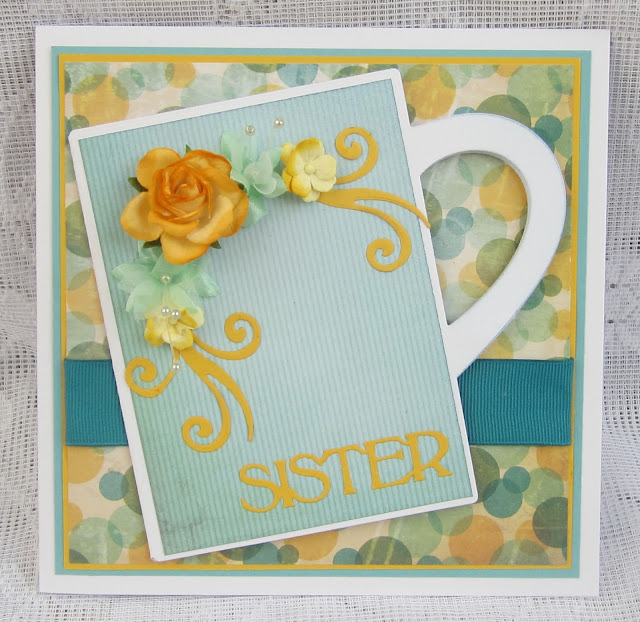 This one was made using the new Mug die set, the mug can be a stand alone card as it opens out but I decided to put it onto a card and use the stencil which goes with the set on the inside, below. 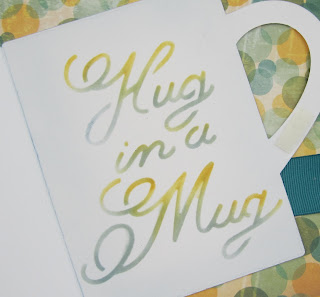 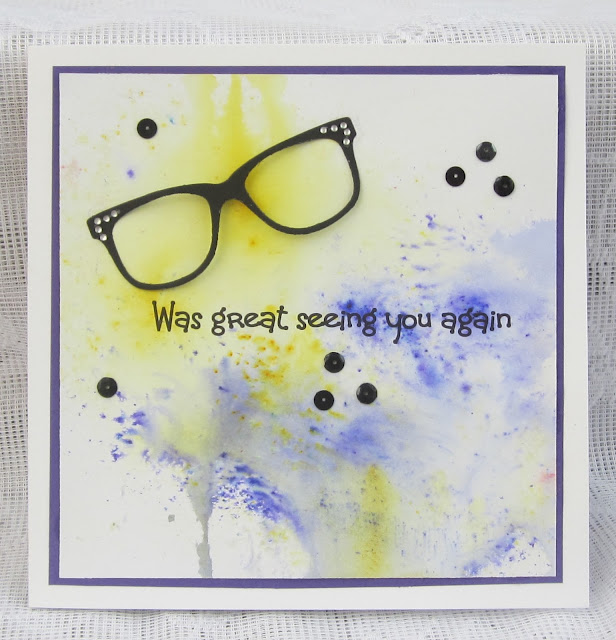 The spectacles are yet another new die which are fun to work with, I kept this one simple with a Brusho background and a computer generated sentiment.............I wasn't sure if the ink would bleed with the water and Brushos but it stayed fixed fine. 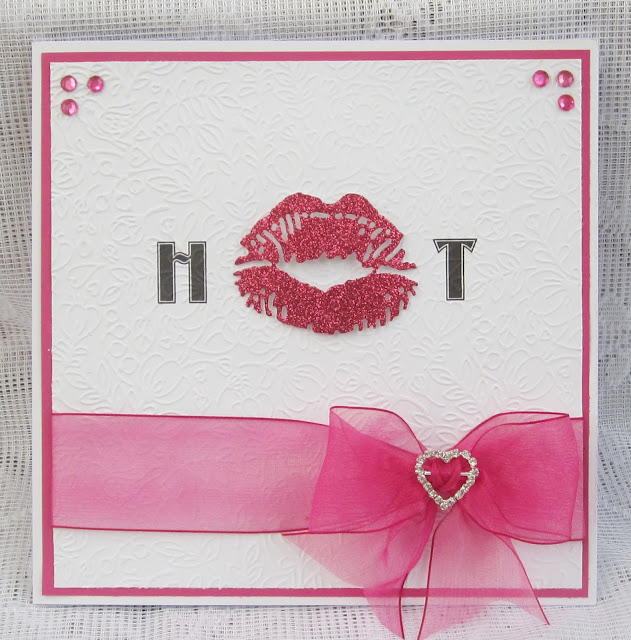 The lips were also new last week, for this one I ptinted the 'H' and 'T' on the computer, embossed the panel, tied some pink ribbon and a heat ribbon slide and cut the lips from pink glitter card and placed between the two letters to for the 'O'.

Hope you all have a good Monday.

your garden is gorgeous! love the cards, too.

Oh my goodness your garden is just gorgeous! I can't imagine getting to go out and smell the wonderful fragrance in the air everyday. It must just be amazing! Your projects are amazing! I love the sister card and the glasses made me laugh! What wonderful art you make! Hugs, Robin

Your cards are great. I love the glasses, so fun. Your garden is beautiful.

Fabulous post, so much to see, Your gardens and blooms are gorgeous. Cute picture of one of your fur babies with his (her?) head in the bushes :) The tag and cards are also very beautiful. Take care, Shirleyxx

Some lovely makes and I love the garden photos

Beautiful pictures of your garden Brenda, everything looks gorgeous. Our garden seems to be slightly behind at the moment, however the large Rhododendron is in full bloom and a gorgeous deep red too which looks lovely but it's getting a good bashing from the wind that has whipped up this afternoon. I guess all the flowers will be on the lawn by tomorrow :(
Beautiful cards as always, I'm waiting for this bundle to arrive from C&C so am grateful for the inspiration you have given here today too.
Lorraine

So sorry it hasn't been a great Bank Holiday Monday with the weather Brenda. Our Bank Holiday is not until next weekend and all I can say is I hope we have the same glorious weather that been having this weekend.

All beautiful Brenda but the eyeglasses has the edge for me, it is very humourous, love it.

Sorry Brenda but us Dorset folk seem to be monopolising the sunshine!! More lovely photographs...what incredible blooms!! What fun dies, the mug is really unusual and the lips and glasses are brilliant and would work very well together xx

Lovely cards Brenda, something a bit different on the die scene, they look great. Your Pom Pom bush is just gorgeous, mine looks nothing like it, the leaves are still coming out and not a sign of a flower yet. We had lovely weather past week, today, grey and a bit chilly. Carol xx

Lovely photos both of the garden and the cards x

Wonderful cards Brenda and your plants look gorgeous too, xxxx

All fabulous cards Brenda. You certainly have a beautiful garden lovely photos and love the curious doggy, Kate x

Gorgeous cards Brenda love the CAS design styles wonderful colours you have used. The weather is the same here Brenda and your garden is a fairy delight, maybe that is what interests the dogs, lol.
hugs
lorraine x

How amazing are those blooms Brenda. Your garden looks glorious. Our first digitalis are out too....such lovely flowers. I love all the cards today especially the hot one...great fun. Enjoy the end of the bank holiday xx

Beautiful cards! And what a awesome photo's and than the big flowers. What beautiful!

a dreamgarden
and such lovely cards!
nancy

Fabulous cards, Brenda! Your combination of pretties is perfect for inspiring me today. We are about to enjoy a summer-time thunderstorm, but it has been sunny rest of the day. Your viburnum are so different from ours! Ours bloom tiny "hard" blooms that barely show their petals! But they ARE white - LOL. Your's are incredible! Love them, and so does your fur child LOL. Beautiful landscaping, Brenda. It's so fun seeing the different gardens and landscapes and patio terraces of our blogging buddies! xo

What an amazing garden you have Brenda, it must keep you very busy!
LOvely variety of cards too, I think my favourite is the tag

Beautiful photos from your garden. We are getting sunny and warm weather here too now.
I´d love to have a garden just like you. :)

Amazing blooms you are very lucky to be able to enjoy the luxury of such beautiful garden
And cards and tags are also very beautiful:)

beautiful pictures Brenda - and I adore your makes too - great diecuts. Big hugs to you! Rachel x

Hi Brenda
What a shame the sun didn't shine on your bank holiday. We have been fairly lucky in the North West to see the sun everyday so we have been able to get out for a couple of walks.
Another stunning collection of cards. The pink lips are amazing. Have you cut them from glitter card or applied the glitter after cutting?
Take care
Lesley

Your garden is so big Brenda and full of beautiful blooms ,great tag and cards, I love those glasses
Kevin xx

These cards are brilliant Brenda. The glasses one made me smile
Beautiful flowers too
Hugs Kelly x

Fun cards--love the sister card! What an amazing Snowball tree--stunning! Wish I could send you some of our sunshine--too hot for the end of May!

Fabulous tag and cards - love the new dies. Your garden photos are lovely too.
Kath x

Oh B the blooms are bloomin gorgeous...Love the TL creations, wish they were not so expensive over this part of the world....they are beautiful dies, and make gorgeous cards as you have shown.....hugs.xx

Beautiful pics! And I love the CAS-cards! Something else and so balanced! Hugs, Gerrina

Love ALL of these creations Brenda! Wonderful new dies there and you used them perfectly. I do so love the photos of your garden too!

Hope you enjoyed your weekend in spite of the weather. We had similar here. Your tag is a beauty and your cards are great fun. I love the style and humour. I've not seen the mug die but think that's going on my wish list.

Lovely photos of your garden. I bet that Viburnum smells beautiful. I love the photo of your nosey Lab! Barbxx

Another set of beautiful cards Brenda, love the photo's too. Lovely sunny Bank Holiday weekend here but last week we were in Norfolk and mid week was pretty cold there too, we usually get good weather when we go but only had 3 sunny days. Have a good evening.

We call them snowballs. Beautiful isn't a strong enough word! Great tag, such a fun hug in a mug, and love the eye glasses die! Cool projects, Brenda. Hugs, Autumn

The weekend was pretty much a wash out and then it got cold! Typical English bank holiday...
Lovely set of cards today Brenda, I can't believe how many new dies Tattered Lace release all the time. I can't keep track of my wish list! xx

Beautiful garden pics and love all the creations great textured tag and love the last two fabulous CAS cards with the glasses and lips -brilliant-been raining and very windy and cold all day but been to watch grandaughters ice-skating.
Carol x

So many different looks. From fun and fabulous to sweet and pretty.
I particularly love the last one!

Wow, youre garden is amazing as youre cards, georgeus flowers, only need for a blanket and enjoy!!
♥Hugs Valentina♥

I love the butterfly tag. New stuff you say? I 'lll just get my purse out. Did I just say that! Hugs Mrs A.

Oh my goodness me there's such a lot to love about the photo's of your garden and the beautiful and creative cards you've made, but I gotta be a good girl and be brief! Let's just say I LOVE them all, specially the Brusho's one!

amazing cards and such a stunning , beautiful garden . jane x

I am a keen gardener and it was lovely seeing your garden pictures , gorgeous. Love your artwork too , such a wide variety. Lovely to visit your blog. Tracy x

Super pics of your garden Brenda. That's one of the joys of nature that she has so many different things to show depending on the season.
More wonderful TL make and I especially love the tag. Have a great weekend xx

Garden and cards are looking fabulous Brenda. Have a lovely weekend. Nicola x

A wonderful garden you have Brenda ,no wonder you are inspired to make beautiful flower cards . I love the movement that you have in your monochrome card even without the colour! This time is a great time to discover things in the garden isn't it ? jenny x

Lovely cards and Brenda what a big garden you have!

I love your garden, so many beautiful flowers. I often have the same view of our dog in the yard while he chases lizards in the garden or toads in their hidey holes. It's a joy to watch his tail wag and be so happy. Love your cards. All so different from your normal cards but so wonderful. I am again playing catch on blog posts while I have a couple of days off work. So many amazing creations I have missed out on here in blogland. Hope all is well with you. 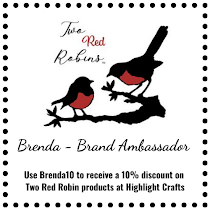 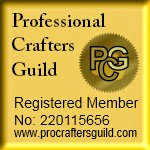