Today sees the start of our new monthly challenges at Stamping Sensations and Penny Black and More where our themes are Pretty in Pink and So Sweet.

What can I say by way of explanation I wonder, as I was supposed to be showcasing some of the new Penny Black Happy Everything stamps which was fine, but me being me I was so excited by all the lovely floral stamps..................including a beautiful Poppy............ in the new releases that all of those I chose had flowers or swirls. I know, no surprises there.

So you can see my dilemma and it's a rather tenuous link to the theme, if occasionally I navigated my head I might have had some stamps that actually fitted the theme more appropriately. Anyhow, after much though I came up with the idea of  poems which had the words 'So Sweet' and the one above is by Robert Bridges and perfect.

I printed the first verse onto cardstock then spritzed with Dylusions Melted Chocolate and Vibrant Torquoise plus Glimmer mist and used three of the new stamps, 4383K First Dance, the lovely Lily which I embossed with details copper, 40-128 Twirls around the edges and part of one of the sentiments from 30-229 Special Wishes in the little label plate. I also did a bit of random inking. with a wire effect stencil and this is what I ended up with. 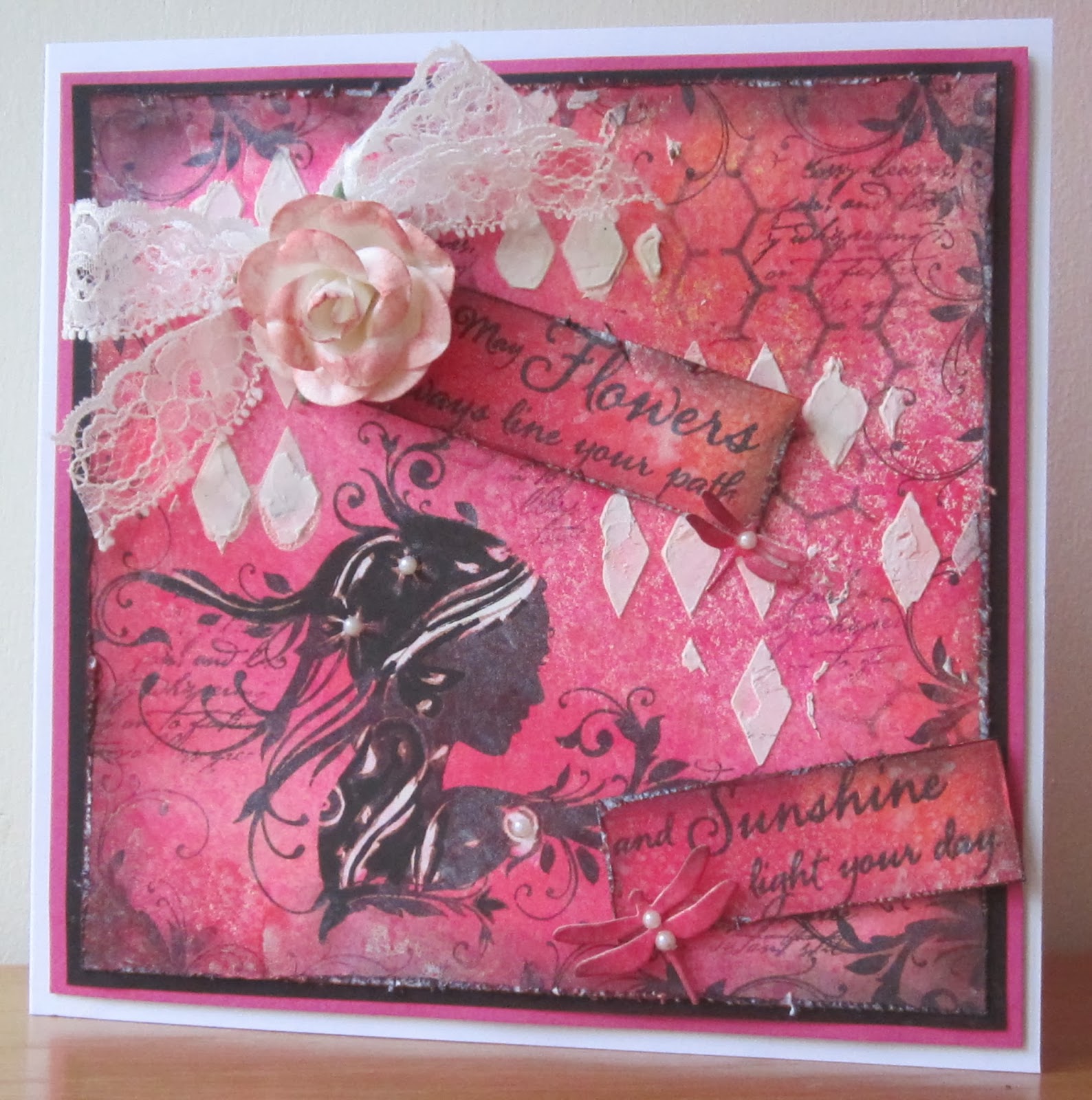 The background of my Stamping Sensations DT piece is also Dylusions, Pink Bubblegum, Cherry Pie and Pure Sunshine and the inevitable spritz of Glimmer Mist to bleed the colours. Next I stamped the Indigo Blue Ella Bella image and randomly stamped with swirls and text and finally added some harlequins using a mask and texture paste. A sentiment, lace and a rose to finish. 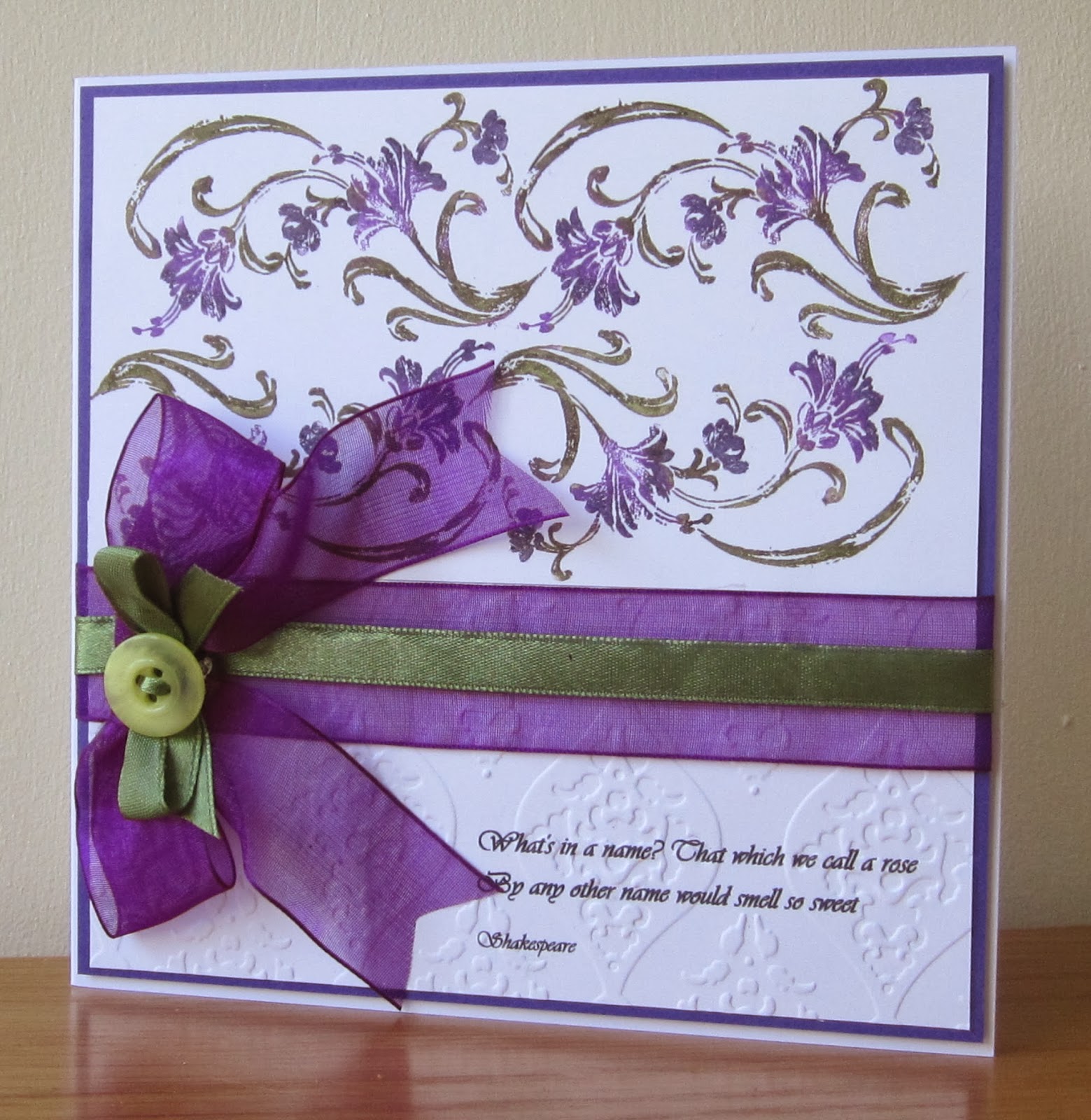 And as a contrast a much less inky creation using the Twirls stamp set again and a little bit of Shakespeare which is probably one known to most of us. I inked the slapstick image with Distress Markers, printed the quote onto white cardstock before embossing with the folder which came with my e.bosser and added some ribbons, a quick make compared with the other two. 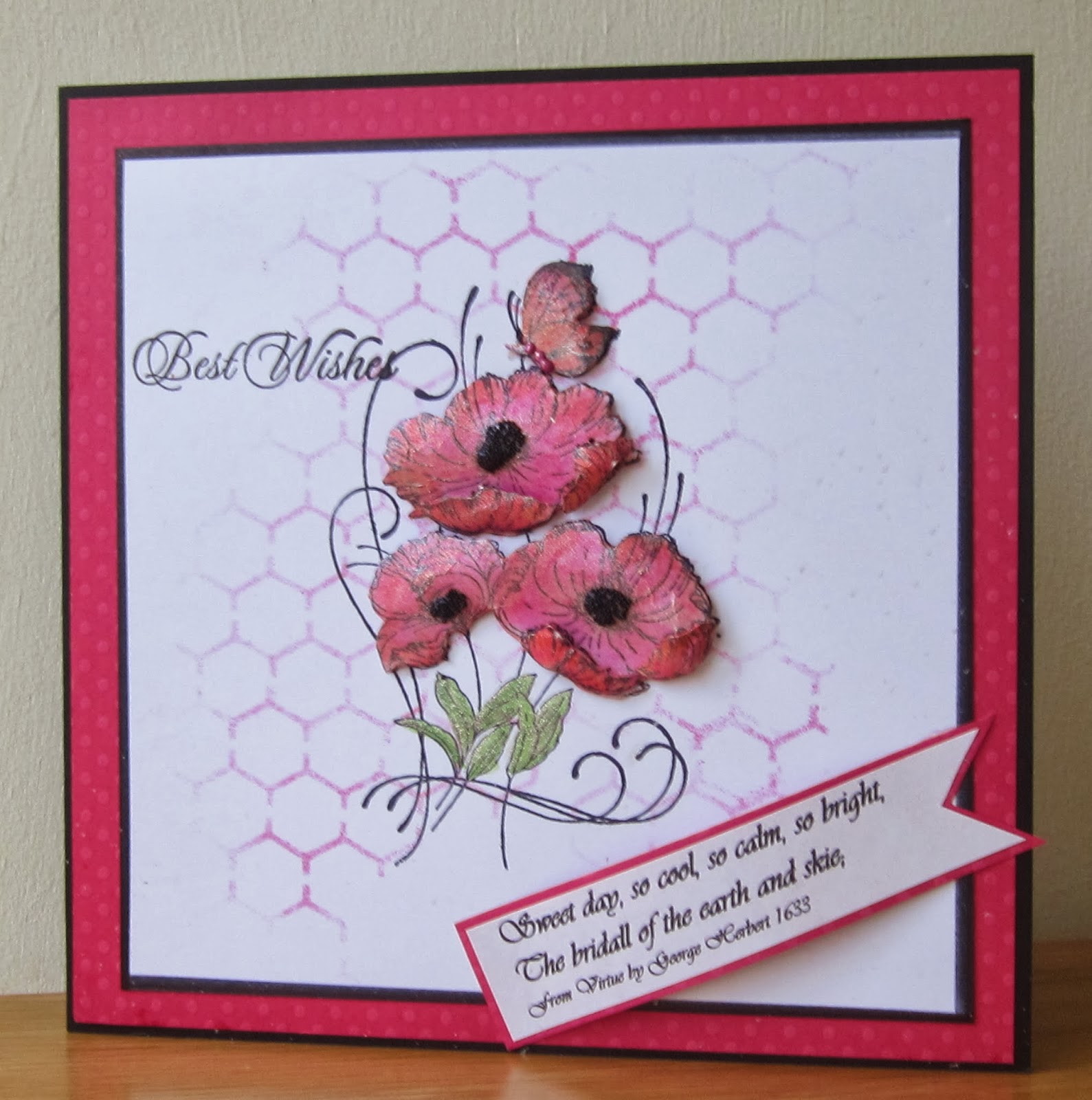 And just the one more which fits both themes, this time with the Poppy stamp called Red Tango 4373K. I used a honeycomb stencil for the background, then stamped the Poppy stamp over it and again twice more cutting out sections of the second two, coloured with distress inks, inked over with Versamak frost spritzed with Glimmer Mist pearl and moulded into shape whilst still wet and decoupaged. The best wishes sentiment is from another of the new PB sets and the verse from the Herbert poem computer generated. 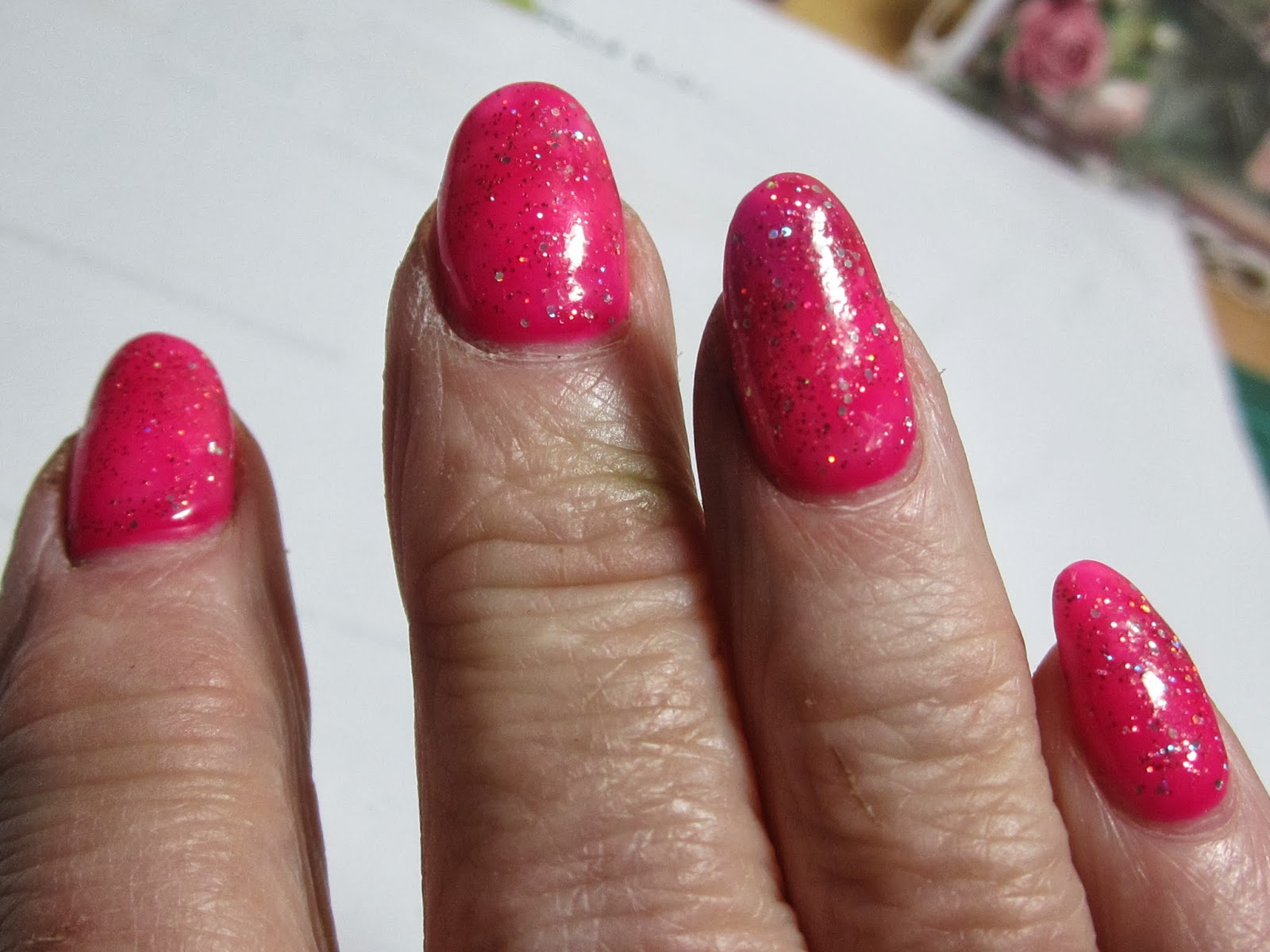 And by sheer coincidence...............and it is as it never occurred to me when I asked for the colour............. this fortnights nail colour is a rather bright pink, or to give it's proper name Radical Raspberry with a coat of glitter on top.


I do hope you will join in our challenges this month and as always we have some awesome prizes to be won.

4 stunning cards Brenda. They are all so pretty and I love the sentiments.
Great pink nails too!
Lorraine x

As usual a fabulous collection of cards Brenda and each one a treasure. I must try to practise more with my inks as i usually end up with a muddy mess lol.

Beautiful pieces of work Brenda, and after reading your post there are lots of extra sweet things in there with the names of the dylusions on the menu. I think my fav is the poppy but they are all truly stunning x Susan x

They are all really beautiful, can't pick a favourite today

These are all stunning Brenda! Couldn't possibly pick a favourite. And I love the nails too! x

All cards are fantastic, Brenda :-))
I like the Pink one very much!
Hugs, Andreja

wow...so many of beautiful cards!! all of them looks so beautifully.
about you nails....neatly painted.. sparkling!

What amazing cards Brenda, but my fave has to be the wonderful decoupaged poppies. The purple and green is definitely a close second xx

Great cards Brenda, can't choose a favourite but have to say I love the nails more!! xx

All of your cards are beautiful! The decoupaged poppies really look lovely. I am quite taken by the metal corners on the first card. Love your fingernails too!

Cannot choose a fave from this beautiful selection of cards Brenda.. all are stunning. Love the CAS look of the poppy card, purple and lime is a fab combo, the pink card is just awesome and the metal embellies and embossing on the first card are fantastic.
(The nails are fab too!!!)
Good weekend so far- LOL - hope yours was as good. YNWA. xxxx

Love the glittery nails Brenda! I had no idea you didn't like creating with blue - it's my favourite colour lol! We'd make a good team, a bit like Jack Spratt and his wife ha ha. Love all your creations and especially the poetry. Wonderful idea. Maddy x

Gorgeous cards Brenda and check out those nails!!! Wishing you a good week ahead. Nicola x

Oh my such gorgeous cards Brenda, I love the flower and swirls on the lilac card and the poppies on the final card are just fantastic. Hope you are having a good weekend - lovely nails too.

Your use of the Robert Bridges poem for the theme is a wonderfully different idea & I love your use of Twirls around the edges. The aqua & brown matting is delightful & I particularly like the way those metal corners blend in with the Twirls stamping.
In your Ella Bella piece it's the white harlequin texture past highlighted the whitel elements of the image that catches my eye.
As for your third - an absolutely gorgeous use of Twirls (you can tell I like that one) & I love your layering of the ribbons.
Your poppy against the netting looks brilliant especially with the dimensional elements you created - I love the way they're a slightly different shade of pinky red.
I'm amazed you manage to keep your nails free from ink & they're beautifully shaped.
Paula (PEP)

It only stands to reason that fingers creating such magic and loveliness, should be beautifully decked out as well, Brenda! Very pretty cards! hugs, de

Stunning cards Brenda... the colours & designs are so beautiful... Love the texture on the the second...& boy if I didn't do the job I do I been having my nails done Monday Morning...Love the colour & sparkle.... Hugs May x x x

Great cards, and love the nails!

I so love what you have done with the new PB set and am loving the fabby poems too, luv Sam x

Wow Brenda, I love your nails! I love nail varnish but I'm sure it wears off my fingertips as soon as I go into the post office and switch the computer on!

Love all these cards Brenda. But I'm sure you can guess which one is my favourite. My ears pricked up when I read new Poppy stamp from PB. I need this stamp, you've made a stunning card with it.

I must apologise for being a bad blogger. I've been a bit pre-occupied with our WRI show next Saturday. I was determined not to be running to my friend's house on Friday evening with my entries. For once I've achieved this and everything is ready to take and leave with her when we have a meeting tomorrow to set up our co-operative table.

Wow, a great serie cards! The first two are super! Love how you played with layers of colour and texture! Enjoy your sunday, Gerrina

Beautiful creations Brenda! Love all of them! Gorgeous textures and stencilling! The floral stamps you have used are gorgeous! I wish I had some in my stash too but do not have a single one:( after looking at the gorgeous embossing on your card I sooo want to buy one ! lovely cards!

These are all amazing Brenda! Beautiful colors and textures, and wonderful verses! I have never thought of using stencils in my card making, will have to check out the local craft store to see what they have! And I do think flowers fit the theme perfectly, most of them, if not all, do smell sweet!

Ha, good job matching the fingernails up with 2 cards!
They're all wonderful!
So are the glittery nails!
Hope you're well!

Gorgeous cards - especially the first two - I just love all those wonderful swirls of colour and energy. Great nails too!
Alison x

These are all beautiful Brenda, and your nails look fabulous, sorry I haven't been around much lately but this moving house is hard work. I hope you are keeping well.
Kevin xx

Just love all the detailing on these especially the ladies head one.. I hope you aren't expecting the rest of us to start matching our nails to our cards, I find it hard enough to match them to my clothes LOL!
Lynn x

Gorgeous selection of cards and I'm loving those nails.

Fabulous - I love the poppies the best!

I wish I had those nails, I wish I could make cards like you.
Great take on the challenge and as always some fabulous cards.

These are all spectacular. But the first one is ... Well, let's say it was love at first sight (yes, it's perfectly normal to use this expression for a card lol). Love the nails too. Pink + glitter = perfect combination. :D Hugs! xx

Each card a master piece. Then I came to the nails. I want those nails!!! Lol. Hugs Mrs A.

A beautiful collections of cards Brenda, and as far as I'mm concerned the fit the bill !
Gorgeous nails too.
Avril xx

beautiful floral cards brenda! i especially love the poppies one too! i don't know what's going on with my reader, but i see i missed some amazing creations of yours (and others too); i'll have to manually visit people i guess. i love the trifold cards!
linda

Brenda these cards are awesome and I do like the nails too.

I so love the first in blues and browns And that silhouette girl is gorgeous.

Beautiful floral cards too, the purple and green is lovely, as is the poppies! You just can't beat poppies, can you!?

Had a family weekend here so haven't had time to get online so glad I checked back to yesterdays post and saw this one. Fabulous cards Brenda. Love the idea of printing the verse and then making the 'background' over it on the first one. If I went on about everything I love about each individual card we'd both be here far too long but I will be bookmarking this lot for future inspiration.
Beryl xx

Gorgeous!! love the purple one... and the sentiment on the pink one is awesome!! beautiful nails :)
-Berina
Moxie Craftie

I can't pick a favourite, but those verses/sentiments are fabulous, especially the first one, love that one. Gorgeous creations all of them.
Happy crafting
Tracy x

Brenda, you are amazing! Your pinks and purple cards are stunning but my favorite is the first one. I just love this color combo and all your stamping, inking and spraying is magnificent.
Hugs,
Eret