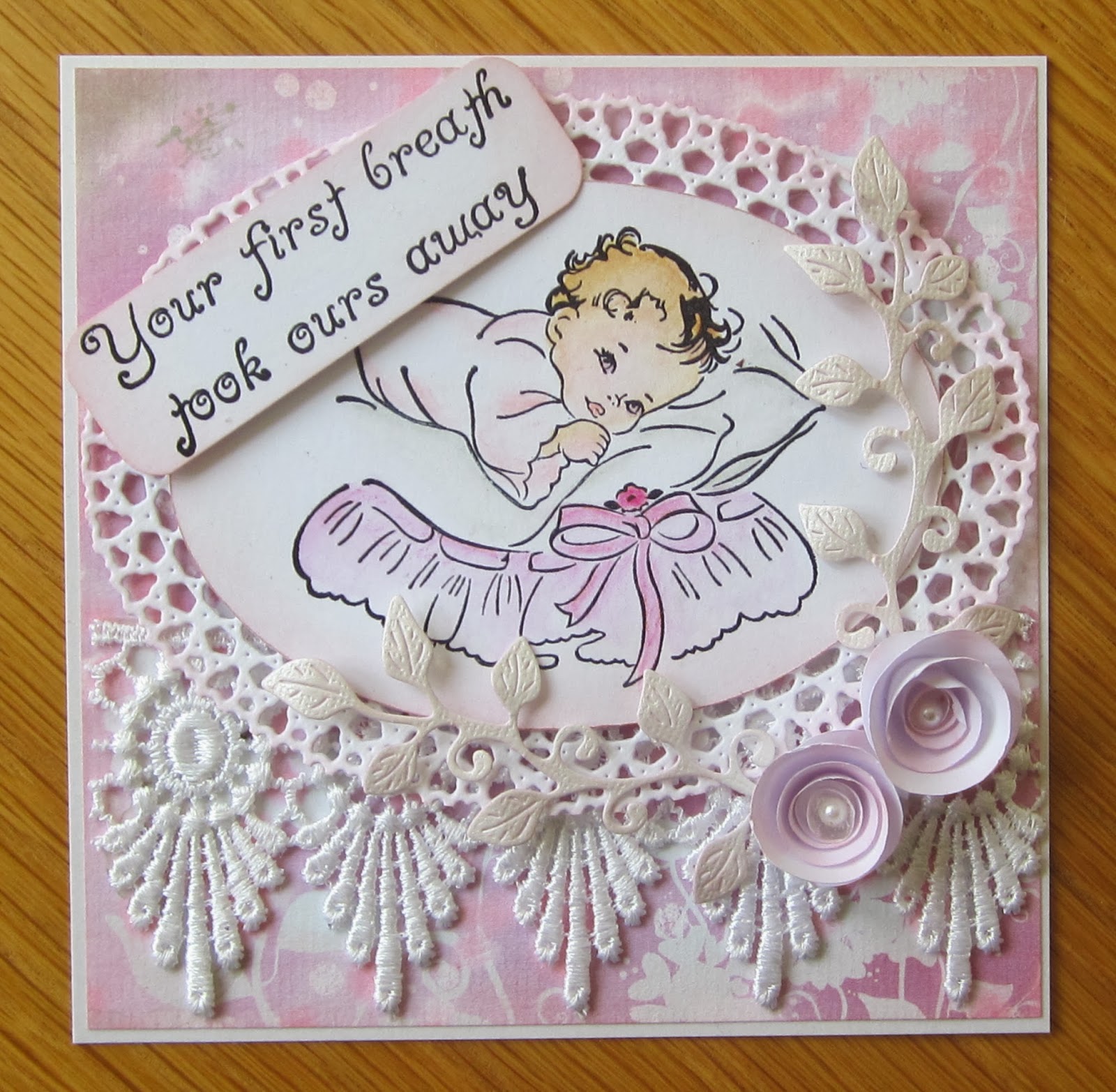 
Another scheduled post for the second day of our Prickly Pear blog hop where we have two awesome $75 prizes to be won and today you should have arrived here from Tracie's blog and move on to Jessica's blog.

And if you didn't visit yesterday's post here it's not to late to pop along so you are in with a second chance of winning one of the prizes.

All the blog hop and prize details can be found here and the Spring release stamps and dies which were showcased at CHA can be found on the store website here. Winners will be announced on the Prickly Pear blog on 2nd February.

Not here for the blog hop Brenda, just wanted to say how gorgeous this is, so pretty :o)
Jackie xx

such a sweet card!!! love the cute image of the baby... We recently had a baby girl.. the pink color and the image reminds me of her :D she's almost 2 months now :)
-Berina
Moxie Craftie

Great card and you do cute very good...lol

The image is sweet and I love the sentiment.

So beautiful and delicate Brenda. Such a wonderful sentiment too.
Hope you are okay.
Hugs
Desíre
{Doing Life – my personal blog}

A really sweet, adorable card, Brenda. I love your guipure lace trim! And such lovely words, too x

Awww this is such a sweetie Brenda and the sentiment is perfect.

This is such a pretty card Brenda and the sentiment is wonderful. Hope you are doing ok. Hugs xx

What a sweet cart!! Enjoy your sunday, Gerrina

What a sweet card! I love the lace and your soft colours!

I love the touch of lace you added to this & the way your vine fronds lead the eye into the baby's face. Lovely & girlie too.
Paula (PEP)

Such an adorable baby card Brenda! such pretty hues! love the overall look of the card:)

I love this card! It's so soft and delicate looking and the image is so sweet. Beautiful sentiment too.

A really sweet card Brenda, the lace is a perfect embellishment! Enjoy the rest of your Sunday!!

Such a beautiful and delicate card, absolutely perfect for that image, enjoying the hop - have caught up with day one and doing day two now and will try to remember to keep up next week too xx

Beautiful card, the image is gorgeous so is the lace. Hope you have had a good weekend.

Oh that's sweet Brenda and what a super sentiment :)
Von ♥

Such a sweet card with a lovely sentiment and absolutely darling baby image. Love this.

The baby card is precious. Love the verse.

So sweet and adorable card, love the lace too;-))m

This is really sweet.

Such a sweet baby card, Brenda!

A gorgeous card Brenda, very cute and sweet! I love the sentiment too.
Lorraine x

So precious!! Love the image and great coloring as well.

This babycard is just so totaly sweet Brenda, love it. I'm making loads of babycards right now for the shop. Hugs Frea

I want to make this card for my fiance's son who just announced he's having his first child! So sweet!

Such a sweet card!
Alison x

Another beautiful card Brenda, I want you to know I don't always get to comment but I do always get to look at what you have been doing!!
Hugs Laurie xx

oh my gosh, how beautiful!

This is just so very pretty and the sentiment is fabulous, great image.

This is adorable. Not only that, but it would look great inserted into a scrapbook page. Love it.

This is wonderful!
Hugs, Debbie!

Such a beautiful card. Love
the lace added to it and the
leave trim.
Carla from Utah

Wow - not only is the image beautiful - but the way you have coloured and mounted it is exquisite.
Blessings
Maxine

so soft colored card...awesome..loved it..

Aw, how precious, Brenda! I love the softness, sweetness, and how you popped up the little vines. Brenda, So sorry I have not been able to visit your blog regularly this month - the bingo game is taking all my time and energy - and will until it is completed. I hope you are feeling better. hugs, de

What a cute card and very sweet stamps.

Absolutely precious and am loving your stunning sentiment too, luv Sam x

This is so sweet and the sentiment great

Well you do "cute" very well! Beautiful card and that sentiment is lovely. Michelle x

This is such a sweet card. That image is just precious.

Such a lovely card and a wonderful saying.

I love the sentiment you used on your card. It's perfect. And that lace is yummy. Not to mention the vintage baby image ... <3 it! Hugs! xx

softly beautiful and what a great sentiment with this

Oh Brenda, my first glimpse of this card took MY breath away, it really is so soft and beautiful xx

Gorgeous card and what a lovely sentiment
Rosie x

gorgeous image! so lovely.
beautiful made.

This is so sweet. The colours are so soft and pretty...love that gorgeous lace too!