No craft but another athletic achievement 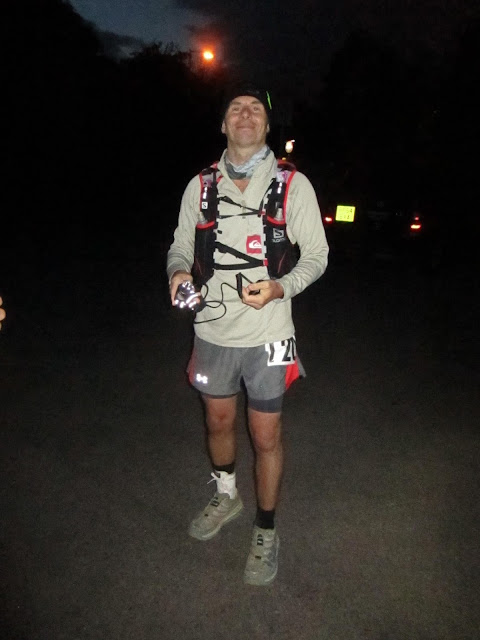 Hello Peeps, back from our travels after a really great trip and now trying to buckle down to reality with all the washing and 20 deg which is a bit of a culture shock after averages of 40 deg. Thanks to all of you who kindly visited when I was away, your comments really are appreciated and of course welcome to my new followers, it's great to have you here.

Now I know lots of you are expecting holiday photos but alas I have none to share as I forget to pack my camera........how on earth I did that I have no idea and it's still in my desk drawer. I did contemplate taking some photos on my table but decided carrying that around in the heat was not really an option, but hubby did quite a lot of videoing so I might be able to get some stills from that when he edits his footage.

So meanwhile I thought I would share some photos of some of my mega sporty clan, this time it was Eliot in the spotlight doing the North Downs Way 100 race last weekend. It's actually 102 miles which he completed in 21.17 hours and came in 18th..............some achievement and naturally we are so proud of him. 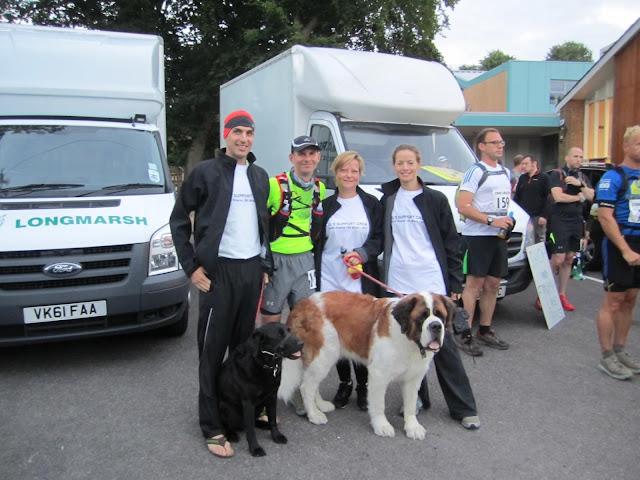 'Team Eliot' plus Bernie and George for added moral support

Due to the gruelling nature of the race runners are required to have a support team responsible for check points and who can run with them during the second half of the race, so Zoe and Alex took on that role running 30 and 22 miles respectively to provide encouragement to Eliot, whist his wife Veronique provided the 'back room' support and also had awesome tops and jackets made for 'Team Eliot'. 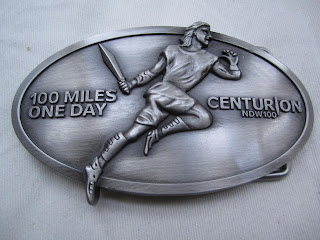 Thanks for taking a look and I will be back later in the week with something crafty.

Hi Brenda, I'm happy to read you have arrived home safely, although it's a shame about the pictures. And running 102 miles non-stop is quite an achievement, both the distance and the time frame. Just thinking about it makes me very tired lol. Temperatures over here are still in the high 20s, so no complaints here.
Marianne x

Brenda congrats on an awesome achievement and its even more special having the whole family as a support team. You are truly a blessed family.
Hugs Desíre {Doing Life}

Ooooo WOW, congrats Eliot and what an achievement too and a fabby medal to go with it too.

That's the sort of muppetery thing i would do - leaving my camera behind !!, glad hubby remembered video camera, Luv Sam x

Wow, another fantastic achievement for the family album :0) I wouldn't even do that on horseback let alone shanks' pony!! xx

Welcome back Brenda and well done to Eliot. He did very well, you must be so proud of him. In the meantime enjoy the washing!!! Michelle x

I can't believe you forgot your camera... !! What an achievement by Eliot though - well done him indeed!

What an amazing achievement! Congratulations to Eliot and his support team too. Fancy forgetting your camera - Steve is probably wishing we had as our total of photos is about 800 between the two of us! It is going to take ages to edit them! You had better create some inky scenes to show us what your trip was like x

What an amazing achivement, well done to him and his team. Fancy forgetting your camera, good job hubby had his video. Glad you had a great time x

wow - thats some achievement - could never even contemplate something like that!!!! No wonder you're proud xx

Ha ha Brenda - when it comes to things like camera's I only take them if my husband remembers! - so I know exactly where you're coming from -meanwhile my son just came back from 5 days in Moscow - with 1700 photos! Well done to Eliot what a great achievement and a great support team too hugs Judith x

Welcome home Brenda, glad you had a good time.
Well done to your son, such an amazing achievement.
Sue xx

Big cheer for team Eliot, and CONGRATULATIONS to Eliot, what an achievement, "Big Proud Mum Moment". Sorry you forgot your camera but glad Eddy had a back-up and was able to video your trip.
Happy crafting
Tracy x

Thanks for sharing the incredible achievement, Brenda. Congratulations to all! hugs, de

Welcome back Brenda. Glad you had such a great holiday. I think you we're ready for a holiday.

Congrats to Eliot and his team for an amazing achievement.

Thanks for your kind words o. My latest post.

It's so lovely to have you back Brenda....I bet you kicked yourself forgetting your camera! Never mind you have memories...who really needs a camera..LOL. What an incredible achievement by your son. Many, many congratulations to him. Jane x

Wow fantastic achivement, well done Eliot,I am sure he will be displaying his belt buckle with pride.
Kevin xx

Hi Brenda, So glad you had a fabulous holiday - what a shame you forgot your camera!
Fabulous photos of 'Team Eliot' and what an achievement, Well Done Eliot.
Avril xx

Well done Elliot! That is an amazing achievement! He and all of you must be so proud!!

Sorry I have not been by much to visit but busy seeing as much as we can of your gorgeous island. Currently in Cumbria but leave in a couple of days for the Filey Scarborough area of Yorkshire.
We are enjoying every minute of your beautiful country.
will catch up on anything I have missed on your blog once home in the fall.
Maureen aka Scrappymo!

Amazing achievement..Well done Eliot...Fantastic news...So glad Brenda you had a super holiday Lovely to have you back...Hugs May x x x

Welcome back Brenda, good to 'see' you.
I cannot equate with running 102 miles in a year leto alone in less than 24 hours. What an achievement. Love that gorgeous dog :o)
Jackie xx

Welcome back Brenda I hope your much needed hols has recharged the batteries. Congratulations to Eliot and well done to Team Eliot for their support.
luv
Debby

You must be so proud!! I couldnot see me running so long (even when I was younger).... Hugs, Gerrina

What a fantastic achievement - no wonder you are so proud of Eliot - and the rest of your clan of course.
Beryl xx

never mind the photos, the best memories are in your mind anyway =)

So glad you had a good holiday Brenda, shame about the photo's, but some great family photo's here, congratulations and well done to Eliot and all his team! Don't think I could do 102 miles in 21 days or even 21 months!!!

OMG running 102 miles non stop is absolutely amazing.
I can't even run up the stairs ROFL
So glad you had a good time honey and a huge congratulations to your super fit family :)

Welcome back, Brenda! Congrats to Eliot with his great achievement! Great family photo! I might be able to complete 102 miles in 102 years!!

Pleased you had a good holiday and hope you are getting on top of the dreaded "post holiday washing".

Congrats and well done to your son! Very good job! Neat buckle to commemorate the event and achievement!

Enjoy winding back down into daily life xoxo

Wow! What an achievement, that's a very long way to run, well done Elliot. I must say I just love your saint bernard too he looks so cuddly
Lindsay xx

Such a brilliant achievement you must be so proud of him.Great pics too.Hugs Debbie x

What an amazing achievement
Rosie x

My brother-in-law wants to do this 100 mile run but as you know he has to do a few other runs before he can so he is working his way up there. Lovely acheievement indeed running for nearly a full day without stopping WOW! and so lovely to see a couple of the babies (dogs) I have missed our little chats. all my fault of course I should e-mail you more often Love you Bren Dxx

Wow, that is such an awesome feat. Way to go Eliot.

I'm amazed he is still smiling, what an achievement !