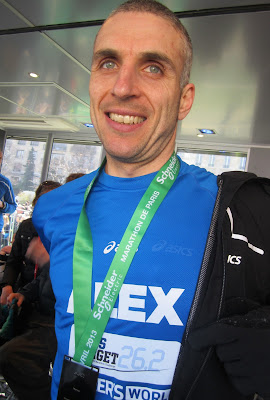 Good Morning Peeps, hope everyone is OK and thanks for all your lovely comments and good wishes for our trip to Paris and Alex's marathon Sunday.

I am thrilled to tell you all that he not only exceeded his own PB (Personal Best) but also the target set by his Asics/Runners Word coaching team and completed the race in 2.53 (2hrs 53mins) so we are mega proud of him as you can imagine. Running at that level every second is important so knocking four minutes off the target he was set by his trainers was very special

Not the best of pictures, I grabbed this one as he was taking his jacket off to do another photo shoot, but I should have some of the official ones very soon.

The weather was cold but sunny for the marathon and just like London the crowds lining the streets to the finishing line running up to the Arc de Triomphe and Champs Elysees were so supportive of all the athletes from the fabulous Kenyan elite athletes familiar from the Olympics, right through to those who took five hours and more.

Asics who were the marathon sponsors and also co-sponsors with Runners World of the competition Alex won had a hospitality suite in prime position right on the finish line and we were invited to watch the race from there, complete with glass in hand so that really made the day extra special. It was also right next to the winners podium so we were able to see the presentations of the winners of the men's, ladies and wheelchair races as well as Alex give his interview which will be on the UK website and in the Runners World magazine where he has appeared the last few months as they followed his training.

I can see some more peeps have joined in my blog celebration whilst we have been in Paris so I will be popping round to you all today then after work I will sort the winners draw and hope to post that either later today or tomorrow.

What a Fantastic achievement - you must be so very proud!! xx

Oh wow Brenda. A huge congrats on Alex's wonderful achievement and that all his dedication, commitment and sacrifices paid off hugely for him. I am sure you are all so proud of him. Now I can also say I know another famous person, apart from his wonderfully talented and famous Mom.
Hugs
Desíre
{Doing Life – my personal blog}

That's fabulous news Brenda. I bet he's thrilled that all training and coaching paid off. I'm so pleased you had a wonderful time and a front-row seat.
Marianne x

What an achievement Brenda please send your son my very best wishes and congratulations. And what a fantastic position your view was. How proud you are your husband must be. Welcome home its good to have you back x

Well done Alex, that's an impressive time! Sounds like you had a great vantage point to watch, very civilised!

Well done , you must be so proud of them, xxxx

My Hubby has just signed up for the Great North Run in September....I think it might take him twice as long to run half the distance!!
Lorraine x

Congrats to your son Brenda and what a proud moment for you all. A wonderful achievement for him. Carolxx

Wow that is an amazing acchievement by Alex! Good to hear you had a nice trip to Paris! Hugs, Hanneke

amazing time Alex - I only ever did one marathon although I still run half marathons once or twice a year - my marathon time was 5 hours 03 mins - nearly double Alex's time! Ha ha xx

Congratulations to Alex on his fantastic achievement. It sounds as though you had a really special time being part of the occasion. Thanks for sharing your proud Mum moment.
Liz xx

You must be so proud of him! Congratulations!
Pearl x

Big Congrats to your son Brenda, that is such an achievement.
Sue xx

That is wonderful Brenda.
Huge congratulations to your son for beating his own PB that must be such a huge confidence booster for him.
It sounds like you all had a fabulous time and I bet you enjoyed every moment and are one proud Mum.
You must be pooped so be sure to get some rest hun.

Huge congratulations to Alex! You must be such a very proud mum, Brenda. So pleased that everything went well and you all had a fantastic experience xx

Congratulation to Alex on exceeding his PB, you must be so proud of him, glad you trip is going well I hope your not over doing the can can
Kevin xx

Congratulations to Alex! What a fantastic achievement, you must all be so proud :) Glad you had such a lovely time!

Fantastic achievement and like others before have said you must be so proud of him. x Susan x

What an accomplishment!
Good for you being able to ba a part of that!
With glass in hand no less!
Welcome home, hope you had a great trip!

Aww..... congrats to Alex and proud mama! Hope you had a great trip!

Oh wow Brenda it sounded really exciting and how proud you must be and so rightly so too. Well done to Alex he must be so pleased with himself.
So glad it went so well.
Happy crafting
Tracy x

No wonder you are so proud of Alex. Big congrats to him!

Fantastic news & hearty congratulations. Glad you had such a super & very special time too.
Paula (PEP)

Well done Alex you must be so proud. Sounds like you had a great time xx

Wow Brenda - what a great achievement, and how fantastic that you were able to be part of the event, and in such a wonderful City too.
Hugs, Sylvia xx

I was very pleased to hear you had a lovely time Brenda. Very many congratulations to Alex and may he go on to achieve great things. Pauline xx

Congrats to Alex, so pleased you had a good trip.
Avril xx

You must be so proud .. a fab pic
Lisa x

Looks like a fabulous time has beeen had by all Brenda. Many congratulations on your son's achievements and it sounds as if he has really earned it with all the hard work. So pleased for you all
x catherine

Well done Alex. All his hard work certainly paid off. You must be really proud of him.

Hope you had a lovely break.

What brilliant news....congrats to Alex, all the hard work has paid off. I bet he is now in training for his next race. How wonderful that you were able to sit right next to the Finish line.

So glad you are now home safe and sound... and NOW we have a celebrity on our hands! Marvelous! Very happy for you all - a fulfilling and enjoyable time. (congrats on your blog, too!) xo

aw great pic and what an awesome time! Glad you all enjoyed yourself!

Welcome Home, we sure did miss you!

Cungratulations Alex, WOW, What a fantastic time too... we are all very proud of you! Brenda you must be bursting with pride so glad you all had a super time... Hugs May x x x

You must be very proud :) Congrats to Alex.

Many congrats to Alex, glad you had a good time.
Lynn x

You must be so proud...good for him to beat his planned time!

ah well doen on your son B. must have been great buzz to be there and support him, my brother is very athletic and now rides bikes although did race professionally in sprint and triathlons apart from his day job. Did Le tour two years ago as tour guide on bike tours with Le Tour -they do about 65% of the course early each day, then they watch race from vantage point. .. he hopes to do it again this year. God bless Shaz in Oz,xx

Huge congratulations to Alex. Glad you had a good time x