It never rains when it pours does it ? 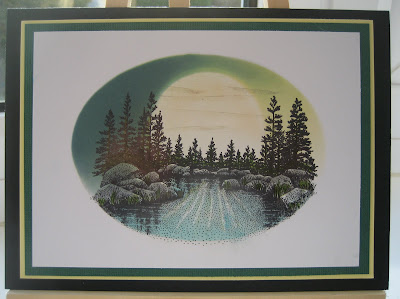 Hello peeps, I'm back from my hols, but not into the groove yet.......that might take a day or two.

A fabulous holiday, but we came home to defrosted fridges and freezers..............the smell met us at the door. Looks like we had a power cut which was long enough to allow the ice machine to leak it's contents which then seeped through the floorboards onto a power cable and threw the trip switch.

It was late before we got everything cleaned up there, so last night before we unpacked and the icing on the cake was finding I had lost all the jewellery I took on holiday. I have a horrid feeling that when we cleared the safe the morning we got off the boat that I left in laying on the bed in our cabin, so have mailed the concierge on the ship in the slim hope it was found................keeping everything crossed.

Then there is the little Mr Linky/Blogger problem that looks like remaining a total mystery but which I need to explain. Somehow despite me adding separate html widget codes to one of my own posts and the August Stampalot challenge, the two seem to have merged. Nobody can offer me any explanation how it happened, so the only answer was to re-launch Stampalot August challenge this morning. So all those who had already entered will need to entered their work a second time onto the new Linky widget. Sorry folks, it had to happen when I was away didn't it ? 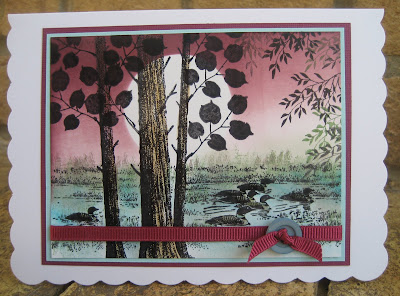 So just a couple of really quick shares made a while back using the Speedball brayer, Adirondack dye inks and Stampscape stamps.

OH goodness...I didn't know about the jewellery too! I'm sure you could do with another holiday now.I really hope your things turn up safely.

The cards are,of course,gorgeous as usual..I do really admire the brayering and have never tried it.
Speak soon,
Ruth x

Oh, dear, your poor things, talk about taking the shine off a holiday! I do hope that your jewellery is safe.

OMGoodness Brenda, I do hope your jewellery is returned to you, and I'm so sorry to hear about the other problems too.

Your cards are stunning - I love the peaceful water scene on the first one.

Good to see you back even with a couple of disasters - can't begin to imagine how your kitchen smelt - poor you! I do hope you get your jewellery back... fingers crossed.
That aside, your cards are - of course! - beautiful! Welcome home (just in time for the start of the season....)

OMG what a greeting to come home too. I hope you get your jewellery back!
Your cards are so beautiful :o)
Jackie xx

These cards are amazing. Hope your luck improves!

Oh Brenda .. so sorry to hear of all your trauma and i do hope they find your jewellery .. but you are both safe and thats the most important thing .. although you must be upset and not a nice way to end your holiday ,which i hope was fabulous .
Love both these cards - the scenes and backgrounds are fabulous
LOvely to have you back
Lisa x

Commiserations dear B. and pray those precious pieces of jewellery turn up safely,more precious because of how we treasure them. Shaz in Oz.x

oh hun so sorry to hear about your jewellery,and all your other problems,too gosh seems like you could do with another one,to get over all this. as for your cards hun they are simply stunning love the detail hugs cherylxxx

On No there is nothing worse than defrosted fridges the stink!!!
i know first hand i worked in a canteen at a school and accidentally forgot to switch back on before the six week holiday!!
yes you can imagine it was horrendous lol x
beautiful cards you have made i do hope you get your jewellery back unfortunately not everyone is as honest as you and i x
fingers crossed
Suzie Qx

So sorry to hear about your problem on your return and the loss of your jewellery. Hope they find them. Great card and fingers crossed for you. :)

Hello Brenda,
These two cards are stunning! I love your brayer work cards.
I am keeping my fingers crossed for the safe return of your jewellery.
Bigs hugs, Clare x

Oh, I can really sympathise as it happened to me about a month ago. What a job it was cleaning everything just as you'd got home let alone the cost of the freezer contents.... and the pong!
I really hope you get your jewellery back after all that. Hope the holiday made up for it too.
Two beautiful cards there...
joZarty x

I particularly like your first card - that scenery is delightful. Sorry to hear of all your troubble - I do hope your jewellery is found. Take care of yourself as you get back to normality.
Paula (PEP)

Oooohhhhhh Brenda, I hope you had a wonderful holiday and were well rested when you arrived home to all of that bad luck!! Fingers crossed that you track down your jewellery too,Im dreadful at mislaying things and even when I think I've lost something it can reappear again so I'm keeping my fingers crossed that the same happens with you. I know it's probably the last thing you feel like doing but your beautiful cards would fit in with the silhouette challenge at Scrapbook Sisters that ends today. Wishing you strength to deal with the clearing up,Julie x

Wow!!!Those scenes you've created on your cards are just stunning....

So sorry to hear about ur jewellery..I hope it is found and returned to u.
The cards are gorgeous, such stunning images.

Hi Brenda
Oh what a nightmare for you, hope it hasn't put too big a dampener on your return from your holiday for you, keeping everything crossed for you that your jewellery turns up.
Love both of your card's (wish I could make my brayering look like your's, no chance) lol.
hugs
Sandra (craftynan)

OMG always seems to go that way. On my last trip I got lost, my cell died, had car trouble in the middle of the desert and so on. I was not happy but like you I made it home safe so we can be thankful for that. I hope some honest person found your jewelry and you will get it all back.

Your cards are stunning. Especially that first one. It looks like a fine painting.
Blessings Bernie

Well they say it comes in three's, and you sure have had your wack luv x
I do hope you are successful with the jewellery.

Hi oh my with the freezer and your jewellery it must be a worry. Hoping it comes back to you. Kitty :D

oh no, I really hope you get your jewellery back!! Your cards are stunning x

Hi Brenda your title says it all, but your two cards are stunning the first one I especially love.
Hugs
Lorraine x

Oh dear Brenda, what an awful welcome home and to realise all your jewellery has been left behind too. I really feel for you, how awful. Well I really hope you get it back. Your card is beautiful though, your brayering skills are incredible. Lee xx

Oh, Brenda, honey, I do hope someone honest has found your jewellery and that it is on it's way back to you. Your cards are gorgeous! You know I love your brayering and stampscape stamps too.

Stunning cards Brenda. Feel as if I could walk into the middle of the first one, it's amazing.

Sorry to hear about the disaster with your fridges and freezers, that must have been horrible for you. Fingers crossed you get your jewellery back. It must be really upsetting.

aw I'm so sorry that you were met home with such catastrophe!

Well I hope you had a great holiday regardless, and hope to maybe see a photo or a dozen on your trip ;-)

OMG Brenda, this first card so reminds me of a Bob Ross painting. It's totally gorgeous, love the second one too. Loving the colours on it, warm and beautiful.
Happy crafting
Tracy x

Amazing cards Brenda, hope the jewellery will be returned!
Smiles:)

What a rubbish end to your holiday - hope your jewellery turns up! x

Your cards are absolutely stunning!

Sorry to hear about your jewelry. We had a break in about 15 years ago and all mine was stolen and some of it had lots of memories.

Oh that certainly wasn't a nice welcome home Brenda. I hope all picks up from now on and that you are lucky enough to get your jewellery back. Great cards....so love your brayering.

Well, that's certainly not the end you want for your holiday. At least you are home safe and sound. I'll keep a set of fingers crossed for your jewelry. 2 gorgeous cards, wish my brayering looked like yours!
R/

Oh dear Brenda it does sound as though everything has turned up a dud, I do hope you manage to get your jewellery back and that must have been so such a shock to find them missing.
Your cards are stunning by the way I love the top one especially its so calming to look at.
I do hope your insurance covers the fridge contents not a nice thing to come home to, all that lot to clear up.
I also had a problem with the Interlinkz thing I put the wrong ending date so the challenge was still open till luckily my DT leader managed to stop it. hugs Shirleyxxx

Oh Brenda how awful to come home to that and the extra worry of your jewellery too - hope you get it back! Two fabulous cards the scene on the first one is stunning! I'm having a little break myself at the moment and will be off on my hols in about 5-6 weeks time so taking it easy so as not to burn out completely. You know what I mean lol.

Hi Brenda, again, I am so sorry your holiday ended in that way! Keeping my fingers crossed that your jewelry will be found.
Your cards are an absolute joy to look at. Wish I could take some stamping lessons from you!
Hugs!!

The cards are beautiful Brenda, love your brayer work.

Hope everything sorts out!

Brenda, just wanted to leave another little comment. I hope you got good news about your jewellery and that the cruise company retrieved it for you. Lee xx

Brenda, your art work is gorgeous. I'm hoping you get your jewelry back. There are a few honest people left in the world. And what a mess that must have been to come home to!!! I hope nothing was seriously damaged.

What a rough ending to a vacation! I do hope your actual cruise was nice.
Your cards are so pretty. I love the look of the brayered background and your stamping is so realistic.
Thank you for sharing them!

Two beautiful cards. You have done a wonderful job colouring the backgrounds with the speedball brayer. :) X X

Beautiful cards! Thanks for sharing.